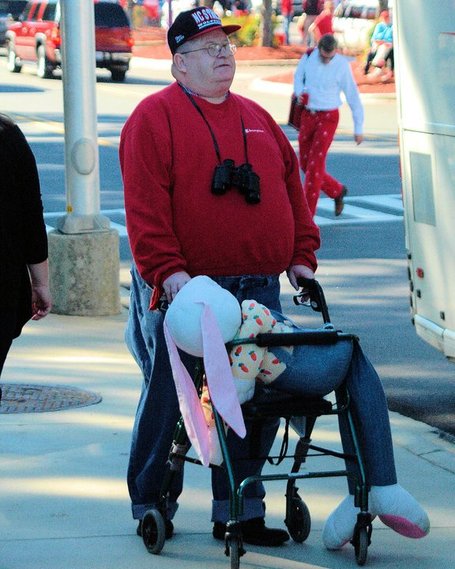 Finally all the cupcakes and easy games are off the schedule and we can start focusing on the ACC teams on schedule this year...LOL.

Ok, so maybe the year hasn't gone the way that we all expected it to go. We are all upset that on January 8th, Wake Forest is 7-8, with a lot of REALLY bad losses to bad teams. It's time to put that aside, and get pumped up for the game today. It is ACC season, and we are 0-0. I am sure that everybody is laughing at me by this point, but we have a chance to start over new, and our players know that. That means we should get behind our boys, get fired up for the games, and get back in that mode where we can't eat, talk, or focus on anything except for the game today.

Without further ado, let's take a look at our opponent today: The N.C State Wolfpack!!!

There is nothing spectacular that jumps out to me at first glance of the 4 Factors for N.C State. They are certainly above average in both offensive and defensive efficiency, and play moderately quickly in terms of tempo. If I had to point to one factor, I would say defensive eFG%. This would normally be a good thing for us, but we have struggled recently with shooting the basketball, and needless to say, we will certainly have to shoot the ball well to win any sizable amount of conference games this year.

Things that I would like for the Deacs to exploit from the Wolfpack is their inability to protect the ball, and inability to attack the glass defensively. Of course these are our two biggest weaknesses as well, so it is a good thing that they also struggle with it. With Tracy Smith coming back tomorrow, I expect the rebounding to not be as big a problem as it has been in the past for the Pack.

Matchup History and Stats from Wake Forest and N.C State (thanks to SCACCHoops.com for their hard work) 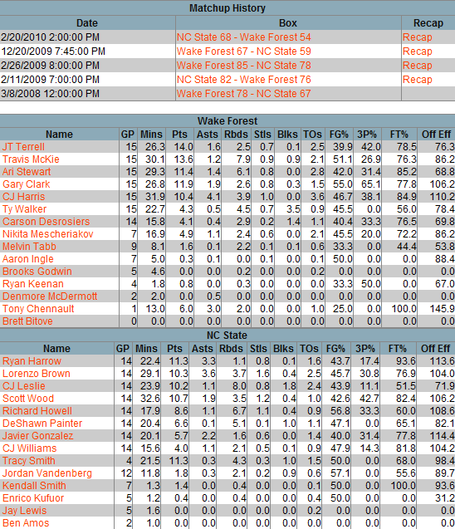 N.C State is actually younger (330th in the country) than Wake Forest is (324th in the country), but both teams rely very heavily on their freshmen and sophomores. As the year goes on, the Wolfpack will effectively "get older" in terms of KenPom rankings due to Tracy Smith playing in more games.

The Pack are led in scoring by freshmen Ryan Harrow, Lorenzo Brown, and CJ Leslie. If all of these guys stay for another year or two, this team will be very, very good. Leslie and Richard Howell have been taking care of most of the rebounds while Smith has been out, and expect Smith to add to that total by at least 4-5 tomorrow.

It does appear, however, that Tracy Smith banged his knee up against Elon, and Sidney Lowe will take extra caution with him to make sure that it is alright and heals properly.

It is interesting that Ryan Harrow has not been starting, but Coach Lowe has made it clear that it is not about who starts the game, but what players do once they are in the game (sound vaguely familiar to any coach that we have heard talk recently???). Both players average over 20 mpg, and are the two primary ballhandlers.

KenPom: NCSU-83 Wake Forest-69 (note that this is projected mostly without Smith playing)

I actually think that this young Wake Forest team will perform well against N.C State. We have seemingly played up or down to the majority of the teams that we have played this year, and I don't expect this game to be any different. A key factor in the game will be how we get out of the starting gate. We have struggled at times this year at the start of the first and second half, and that cannot happen from here on out if we want to have a shot at winning games.

Despite this being important, I still think that we will come out overamped and allow State to get a 6-8 point lead at the first tv timeout. We will calm down from there and get it back to 2-4 points at around the 8-10 minute mark, and keep it there until halftime. The Deacs will suffer a setback at the beginning of the 2nd half, and fall back into that 6-10 point lull before fighting back to tie it up, and maybe even taking the lead.

At this point that an upperclassmen for State (Wood, Smith, Javi) will step up and play a big role in the game, and stretch the lead back out to 10-12, before we cut into it one last time to it's final 6 point margin.

All in all, I think that this game will be much closer than people expect, and hell, Wake Forest may even pull out a stunning upset. I am not putting my money behind my big mouth, because that is certainly not what the so called "experts" are picking, but I'm a fan, and pretty much do whatever I want to, which is pick extremely optimistically.
I'm predicting a big game by Travis, and really hope that Carson continues to grow into the big man that we need inside. We are going to have to pound on the Pack inside, and have 20 fouls to give with Melvin, Carson, Nikita and Ty. That excludes Travis and Ari, and they can get in on the fun too since State only shoots 70% from the line (not bad, but not good either).
I'm just going to have a good time watching the team in the ACC, and am really resetting my expectations to not include wins and losses, but rather look at the whole body of work. If I had any position of authority, I would suggest you do the same, but I will leave that up to you. As always, Go Deacs, and the multiple C's are always welcome!!!