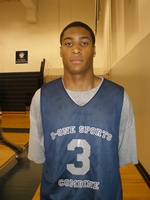 With yesterday's signing of 2011 PG Anthony Fields, the Wake Forest Demon Deacon basketball team's 2011 class is nearly complete. Fields is now part of a three-man class with previous signees Chase Fischer and Daniel Green. Fields is a true point guard who plays at Quality Education Academy in Winston-Salem. With three scholarships now being handed out for the 2011 class, it's time to take a look at where Wake Forest stands scholarship-wise moving forward, as well as mention potential targets to shore up the 2011 class and begin on the 2012 class.

Click through for an update on where Wake Forest stands on the basketball recruiting front.

Anthony Fields commitment for the 2011 class addresses a huge problem with the current version of the Wake Forest basketball team: ball handling. With freshman Tony Chennault's foot injury keeping him sidelined for the immediate future, the Deacons have struggled without the presence of a true point guard and floor general. Fields will come in and need to command immediate playing time as he will be expected to step in instantly as the backup point guard to Chennault. Fields is a pass first point guard with quick hands, good acceleration, and a nose for getting the ball into the basket in traffic. While his jumper can use some work, Fields excels in the areas that the team currently lacks. Here is ESPN's profile for the 2011 guard:

Strengths:
This hard working point guard has improved at a steady rate. Fields plays with great pace and has the ability to lead a team. He pushes the ball in transition and does a get job of attacking the rim or drawing multiple defenders and dishing to an open teammate. Fields can get his own shot off the dribble in addition to knocking down open three's with time. He can beat his man with a quick first step and tight handle. Fields also sets the tone defensively with constant ball pressure.

Weaknesses:
Fields is a good athlete that needs to add strength but is wiry and long. Needs more consistency on his jumpshot in order to keep defenders from sagging off him.

Bottom Line:
He demands and holds your attention because he is productive throughout the game. Fields made good decisions with the ball when he had to break pressure and he stepped to the line and knocked down free throws at the end of the game. Fields played a complete game and was a treat to watch control the game like a pint guard is supposed too.

Anyone in the Winston area interested in seeing a future Deac take the court has several great opportunities to do so with Fields playing locally at QEA. He can be a captivating player at times and demands the attention of the crowd with his flashy style of play. On the other hand, he is fundamentally sound and should be a very welcome addition to the team due to his ball-handling skills.

Moving on from Fields' commitment and onto a broader scope of the recruiting scene, Wake's scholarship situation currently provides the Deacs with some different options moving forward. Here's the current Wake roster next year which allows us to examine the number of available scholarships:

Bzdelik has a couple of options with this final scholarship: he can either use it on the 2011 class, or he can opt not to use and carry it over until 2012. There are pros and cons to each of these two approaches. We are in desperate need of a body down low who can bang around, commit some fouls, and grab some rebounds and anyone we can grab in 2011 to do this job would be a very helpful addition. The difficulty in this is that it is very late in the 2011 recruiting class at this point and most of the highly touted and rated bigs have already committed or are being pursued by several other big-time schools.

If Bzdelik does decide to carry the scholarship over and make the 2011 class a three man class, he will have more time to establish his identity with Wake Forest and create longer and deeper ties with recruits from the 2012 class. However, this would leave next year's team greatly lacking in depth from the 4 and 5 position.

From most indications and sources, Bzdelik is more than likely going to go ahead and use the remaining available scholarship for the 2011 season on a big who can plug some of the gaping holes this year's team has exhibited thus far over the season. One potential target who over the past month has been increasingly likely to receive an offer from Wake Forest is another QEA standout in Lekan Ajayi. Ajayi is a fantastic rebounder and has stated in interviews that his goal is to become the "best rebounder in America". Lekan can get up and down the floor well, and at roughly 6'10", 240 lbs, provides a big body that Wake could use.

Wake has shown interest in Ajayi over the past few months and were one of the first bigger teams to recruit the Nigerian big man.

Katenda's most recent list had been trimmed to three with Wake making the cut along with Notre Dame and Georgia Tech. Hubert's most recent list included Wake along with Maryland and Princeton. Each of these lists are fluid though and always subject to change as suitors come and go. It would not be unlikely for some bigger schools to swoop in and make a move as recruiting reaches the home stretch, but this is the latest information.

If Bzdelik utilizes his final scholarship on the 2011 class, that leaves the 2012 class with two openings and with attrition this number could increase The 2012 class features two names which have appeared on multiple top 100 recruiting lists in F Montrezl Harrell and F Stefan Jankovic. Wake is believed to be heavily recruiting each of these two prospects, both of which have been on the rise in recent rankings. One more name to keep in mind for the 2012 class is G Codi Miller-McIntyre out of Concord, North Carolina who Wake is believed to be in contact with as well.

There is a larger focus on the 2011 recruiting class right now as we are nearing the homestretch, but we will provide updates on the 2012 prospects and class as more information becomes available.