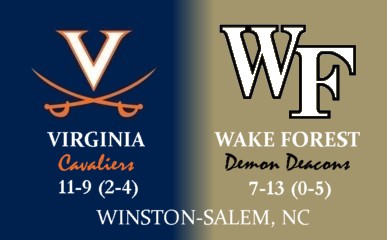 Alright guys, let's get these previews back up and rollin'. We have been somewhat lackluster recently for several reasons. Admittedly it has been difficult to get the motivation to take the time to write these when we aren't seeing any wins. I'm going to change that and throw this one up for the game tomorrow!

This is a huge game for the Deacs (7-13, 0-5) as they take on the Virginia Cavaliers (11-9, 2-4) at the Joel today at 4 (ACC Network, ESPN3). The Cavaliers are coming off an embarrassing 66-42 at home on Thursday night to the Maryland Terrapins, and the Deacs are of course coming off of a better-played-than-the-score-would-indicate 83-59 loss to the #2 Duke Blue Devils last Saturday.

Click through for projected starting lineups, predictions/projections, and general information about the game.

UVA has played very well at times this year, but with the loss of Mike Scott, (their leading scorer and rebounder on the year) they have really struggled in ACC play. According to KenPom, UVA is by far the best chance left on the schedule if Wake Forest wants to win a game this year in the ACC (29%, next closest is 20% against State).

UVA has an above average offense, and an average defense, but neither is extremely impressive. They do not turn the ball over very much, but don't force turnovers either, so that is a wash. Offensively, their shooting is mediocre, but defensively they are not very good (allowing opponents to shoot a 51% eFG%). The interesting thing about the Hoos is the fact that when they have a sector that they do well offensively or defensively, they are just as bad on the other side of the ball in that sector (see offensive rebounding % and free throw rate).

With Mike Scott out for the year, the Cavs are relying heavily on Mustapha Farrakhan and KT Harrell to carry the scoring load. Joe Harris also has shouldered a bit of that burden. Farrakhan has stepped up to the challenge, and is averaging 16 ppg in his last 7 (including a 31 point output against Howard earlier this month). When Scott went down, rebounding is what really suffered. Assane Sene is the only other player on the team averaging over 4 rebounds. Since Scott went out, Sene has averaged 7.5 rpg, but that is not enough to make up for the loss of Scott.

Sammy Zeglinski, whose father, John Zeglinski played football and basketball at Wake Forest, has seen limited minutes after coming back from a cartilage injury in his left knee. He certainly has not been as effective this year, averaging 5 ppg and 2 apg, compared to 9 ppg and 3 apg last year.

They do not have the best size in the ACC, and we should look to get Sene into early foul trouble to make that deficiency even more glaring. If this can happen, Carson could have a great day out there (especially if he can get his layups to fall). UVA will likely only get 7-8 players meaningful minutes (Sherrill, Zeglinski and Miller + the starters).

The Hoos have many of the same problems that the Deacs have had this year. They are a young team that isn't very big (especially with Scott out), and have had some bad luck with injuries. Tony Bennett is an outstanding coach (national coach of the year in 2007 at Washington State), and has proven that he can garner success at UVA in his first year and a half there. While this game may not be pretty to the outsider, I am quite excited about it because I think it will be a hard fought game between two teams that need a win to get back on the right track.
Predictions
KenPom: UVA 69 WFU 64 (71%)
ESPN AccuScore- I would usually put this in here, but it has a prediction of what Mike Scott is going to do (leading scorer for UVA), so I'm not going to add it. If you are curious, it has UVA winning 72-66 (approximately a 70% favorite).
My Prediction: Wake 71 UVA 68
You all probably think that I am certifiably insane for picking Wake Forest to win this game. Here are 3 reasons why Wake Forest will win tomorrow.
Final Words
As a blog, rather than a newspaper or a message board, Blogger So Dear is a unique website for Wake Forest fans. Y'all get opinions (when we don't slack off), and y'all get some good fundamental reporting on events that you cannot attend due to geographic restrictions, or other reasons. Y'all also can communicate with each other and the writers; and frankly that isn't really anything fancy because we, just like you guys, are diehards who happen to write for a blog. I love this mix because we have a fantastic balance of rational opinions, and that leads to great conversations about games, coaches, and Wake Forest athletics as a whole.
The reason I bring this up at all is because lately there have been some things written that have bordered on personal attacks and insults. This is not "the boards" where ripping on each other is a way of life. I have immense respect for everybody that comments and posts on here, and it is because of you guys that I continue to write and dish out information. I love the discussion, and it is hard to get that even in person sometimes on campus these days, and especially not the message boards. I am 100% sure that Jake, Martin, Bart, and all the other writers would agree with that as well.
I will never ask any of you all to censor your comments as long as they are not personal attacks and insults, but I want to ask that we not continue to rehash the same things over and over again when it is obvious that they are not going to change anytime soon. The things that Coach Bzdelik has done in the past are just that, things in the past. They will not change no matter how many times we say it over and over and over again. I understand that they are frustrating things to say the least, and I share some of the concerns about it as well. I do feel that we should give the whole situation a fair shake before we go absolutely crazy. As Ron Wellman has stated in seemingly every public forum over the past week, he is fully behind Coach Bzdelik. Now is this the correct move? I have absolutely no idea. If I had a crystal ball I would care a lot less about Wake Forest athletics, and a lot more about PowerBall numbers. I am going to give the situation a chance to play out before I criticize it again, and in 2-3 years we will likely have our final verdict on the issue at hand.
I have been overly critical at times this year, and have become more level-headed, particularly after attending the coaches luncheon this past week. I am not too stubborn to say that I may have reacted too strongly at the beginning of the Coach Bzdelik regime, and I will not be too stubborn to criticize him again....in 2-3 years if it is obvious that he is not the answer. This doesn't mean that I won't say things out of anger that are harsh, but as a bigger picture, I am going to take a step back and let it all play out instead of trying to microanalyze every little thing. I merely offer this as a suggestion to y'all that you attempt to do the same. Get behind these guys, they need it more than you can imagine. You may even be a little surprised at what you see in the next few games.
Sorry I went off on a bit of a tangent there in this game preview. I may expand more on this in an upcoming article, but I wanted to get that "rant" if you will, out there to the readers that I enjoy sharing Wake Forest athletics with. As always, comments are welcome and let's get that first ACC win of the year tomorrow. GET BIG YOU HAIRY DEACS!!!!!!!!!!