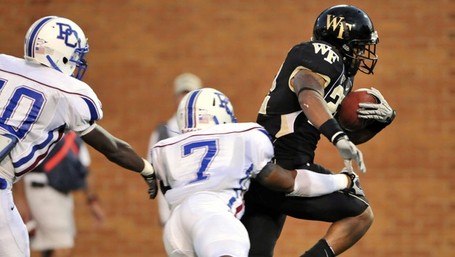 Wake Forest football got off to a good start last night cruising to an easy 40 point victory against over-matched Presbyterian, who was playing their first game ever against a BCS opponent. The Deacs were dominant from the start, taking the opening kickoff to the house before having it called back for a block in the back. Sophomore Ted Stachitas scored three plays later on a 34 yard scamper just under two minutes in, giving Wake the lead for good.

Click through for a more detailed breakdown of Wake's opening performance against Presbyterian.

The Deacons continued to press on both sides of the ball and went up 21-0 after the first quarter behind a 14 yard touchdown run from Sr. Josh Adams, and an interception returned for six by Sr. Alex Frye. The Deacon defense looked dominant early on, holding the Blue Hose to only 21 first quarter yards and no first downs. Presbyterian looked unable to establish a solid running game against a bigger defensive line. QB Brandon Miley was also unable to find enough time to look downfield due to constant pressure, leaving Presbyterian looking for answers after the first 15 minutes of the season.

The second quarter saw Wake's offensive dominance drop off a bit as they were forced to punt a couple times before Brandon Pendergrass burst through for a score midway through the quarter to put the Deacs up 28-0. This time Presbyterian was able to answer, using an incredible play to score their first points of the year. Miley took the snap and turned to throw the ball out to wideout Derrick Overhart on an apparent screen. The ball landed about 6 feet short of the target and bounced to Overhart who acted disgusted, slapping the ball between his hands twice. However no whistle blew as the ball was legally a backward pass, and therefore a fumble. The Deacon defense had stopped playing as Overhart then launched the ball deep to Michael Ruff who was wide open on a fly route, and easily took the ball in for six. This marked the high point for Presbyterian on a night where they were otherwise outmatched. Wake again struck right before the half as Ted Stachitas led the team on a seven play, 51 yard drive capped by a Josh Harris three yard run to put the Deacs up 35-7 at halftime.

The third quarter was, for lack of a better word, just boring football. Wake looked content to call one of the most conservative games in football history while Presbyterian was finally able to move the ball against the Wake defense. Presbyterian struck first in the quarter, driving 80 yards in eight plays on the first drive of the half. Unfortunately for the Blue Hose the extra point was blocked and Kenny Okoro returned it to the end zone, giving Wake an extra two points and making the score 37-13. True freshman Tanner Price started the second half, ending any speculation of whether or not he would be redshirted, and despite his pretty poor statistical output looked very solid in the pocket. As the third quarter ended, the Deacs were well on their way to victory up 37-13, but outplayed by Presby for the first fifteen minutes of the half.

The fourth quarter was for all intents and purposes a glorified scrimmage. Wake was able to get quarterbacks Brendan Cross and Skylar Jones into the game and tack on two more touchdowns on lengthy runs from Devon Brown and Josh Harris. When it was all said and done the Deacs had a 53-13 victory and were off to a 1-0 start, while Presbyterian started the year with a loss. Things do not appear to get easier for Presbyterian as they head off to Death Valley next Saturday to take on the Clemson Tigers.

The Deacons looked great at points during the game on the offensive side of the ball. The playcalling was very conservative and sometimes bordering on ridiculous as the zone read and short slant routes were about the only plays called. For seemingly the millionth year in a row, the offensive line will need to work harder to protect the quarterback and did not instill much confidence that they will be ready to take on the physical defensive lines of teams in the ACC.

The running backs were easily the most impressive part of the offense. All three backs got into the end zone, with Josh Harris scoring twice. Harris looks like he could come in and contribute immediately if given the chance, but both Adams and Pendergrass showed why they were one and two on the depth chart coming into the game. Tommy Bohanon was also impressive showing off good speed for a fullback and stretching the ball outside to get into the second and third levels of the Presby defense on multiple occasions.

In their limited appearances, the wideouts looked decent. Marshall Williams is as good as he has been in the past and flankers Devon Brown and Michael Campanaro look ready to contribute from the slot position. Jordan Williams continues to be a concern as he still cannot catch a football after four years at Wake.

By far the most controversial and biggest question going forward is that of who will play quarterback. Stachitas looked good at points in the first half, but also had some terrible throws on seemingly easy pass plays. Price played well in the second half despite a couple of drops from Pendergrass on a screen and J. Williams on a perfectly thrown slant route which would have given Wake a first down. Brendan Cross had a nice toss to Terence Davis who was just unable to keep his feet in the back of the end zone on what would have been a touchdown. Skylar Jones showed his ability to take off from the backfield, but did little to quell the criticism of his arm as there were only a couple of passing plays called while he was taking the snaps.

After the game, Grobe gave his take on the quarterback situation saying that "unless we think differently after we look at film, that Ted played well enough to be the guy next week. We've got to get Tanner on the field. We're going to be at least a two-quarterback system for a while, I think." This situation promises to be the most pressing issue on offense going forward and we will keep you updated on any news we hear on it.

The defense had a few bright spots mixed in with some questionable coverages. Kyle Wilber looks to be a stud coming off the line, finishing the game with three sacks and six tackles. Cyhl Quarles looks solid in his safety position as well, accruing seven tackles while roaming the third level of the Deacon defense. CB Kenny Okoro also looked good, keeping his receiver locked down despite drawing a highly questionable pass interference penalty which set up Presbyterian's second touchdown.

On the other hand, the defense also leaves a few questions which will need to be answered. There appeared to be limited blitz packages called which is undoubtedly due to the limited scope of the playbook employed by defensive coordinator Brad Lambert, but it is something that we will be sure to keep an eye on. For the second year in a row, the linebacker corps looks to lack a bit of speed, but it's nothing that a couple more games won't be able to work out as the schemes are worked out.

CB Josh Bush appeared to be the one player who may have left his job open to competition. On several occasions Bush was beat by his man. In particular he picked up an egregious pass interference call on a simple fade route when he simply failed to turn around or even attempt to find the ball. Bush is moderately quick, but needs to play smarter if he is going to stay on the field.

Another storyline to keep an eye on is the injury of LB Justin Jackson.  Jackson suffered an apparent knee injury that could put him on the shelf for quite a while, which could be a big blow for Wake.  Jackson provided some speed at the LB spot that the Deacs lacked last season.

It's hard to find too much to pick apart with a 40 point victory, and at the end of the day the Deacons are 1-0. A game with pretty big implications for Wake lies ahead as Duke rolls into town next week for a noon kickoff. If the Deacs are going to get to a bowl this season this game is almost assuredly a must win. While it is a short time for a team to have a "must win" game, it will be fun to see if these young Deacs are up to the task of getting the job done.