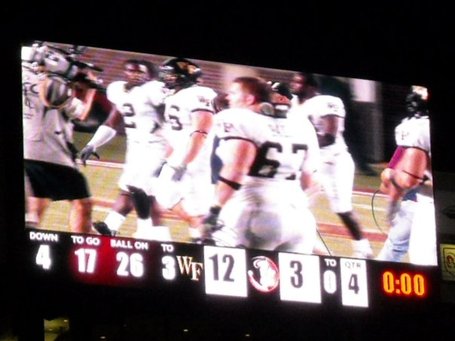 Wake Forest is coming off of a big 68-24 loss at the hands of the Stanford Cardinal on Saturday. FSU rebounded nicely from a blowout at Oklahoma to defeat BYU 34-10. While the momentum is certainly with FSU, it will be interesting to see how the Deacs can bounce back (especially defensively) from their performance last weekend.

Before I get started on my amateur analysis, I have to recommend any casual or die-hard Wake Forest fan to check out Tomahawk Nation's preview by Bud Elliott. Nothing that I can write would ever compare to that. Kudos to him.

Preview after the jump

I would say without a doubt, this is the biggest X-factor for the game tomorrow. Both teams have shown the ability to put up points this year, but both have also shown that they can allow a lot of points too.

To say that Wake Forest's defense had a rough go of things last weekend would be a gross understatement. Stanford's first 8 possessions all ended in touchdowns, which if you think about it is astounding. Wake Forest ranks 116th in the nation in points allowed per game at 43.0. This is after a sample size of a bad team, an average team, and a good team. It doesn't bode well for the rest of the season if we don't get this figured out quickly.

On the Florida State offensive side, the 'Noles rank 23rd in the nation in ppg (36.7), and are led by a balanced rushing and passing attack.

Christian Ponder and E.J. Manuel have both seen time at QB this year, but there is no doubt that Ponder is the starter when healthy, which he is not at the moment. There has been speculation that Ponder may not play the whole game tomorrow, or Manuel may get the start due to a deep triceps bruise. Wake fans may remember that Manuel started last year for the Seminoles and led their offense quite efficiently en route to a 41-28 victory.

Whether or not Ponder or Manuel plays is irrelevant if Wake Forest does not get their defensive schemes figured out. The secondary is having a very difficult time stopping the two FBS teams they have played so far. While it is certainly easy to pin the blame squarely on the corners and safeties, I believe the problems begin up front. There has been almost no pressure up front and that allowed Renfree and Luck to take their time reading the field. When you give a good quarterback 3-5 seconds nearly every snap, there is no hope for the secondary.

Florida State uses Ty Jones and Chris Thompson in the running game, with both averaging over 8 ypc (a staggering number). This will challenge our defensive line tremendously. I expect Kyle Wilber and Tristan Dorty to step up to the plate and put their best foot forward. I am concerned about the lack of size (particularly with Whitlock in the middle) on our d-line going up against the offensive line of the Seminoles. This is by far the smallest FBS defense that FSU will play all year and I think they could have a field day on the line of scrimmage.

I am very interested to see how Lambert and Grobe prepared for the Seminoles this week. In my completely unprofessional and amateur opinion, I think the corners need to press a little more and even blitz some. Since the d-line and linebackers have not had a lot of success in reaching the QB, why not try different things (safety blitzes, delayed blitzes, corner blitzes, zone blitzes, etc.). I am sure that the coaching staff has talked about this ad nauseum this week and I expect to see a big difference.

This is the area that I feel more optimistic than most. Wake Forest has one of the best offenses they have ever had this year. Led by an outstanding wide receiver and running back corps with speed that we have never seen from the Deacs, points have not been hard to come by.

Wake Forest is averaging 147 yards in the air (105th), but in the running game the Deacs have experienced a bit of a throwback to Grobe's earlier years and rank 7th in the nation with 283.7 ypg. On the other hand, Florida State is allowing 21 ppg and saw their defense torn to shreds by Oklahoma. Conversely, they had a great day against BYU, allowing only 39 yards in the 2nd half. I am eager to see which FSU defense shows up, but I expect a little bit of both. They will give up one or two big plays but overall the yard per play should not be much higher than 4. If FSU can control the big plays they will have no trouble winning this one going away.

Tanner Price struggled a bit at Stanford (but who didn't), however I expect him to rebound tomorrow and have a workmanlike performance (Riley Skinner-esque if you will). If he can manage the game and get the ball in the hands of our playmakers, I think the Deacs will get to the 21-30 point mark with ease. If Price is hitting on his short passes early and has some confidence, Wake will need to go ahead and challenge the secondary. The passing defense is suspect at best for FSU, and some middle to long passes early will extend the defense and open up holes for our playmakers to run through.

The biggest problem with our offense right now is the lack of a running game with our running backs. As dumb as this may sound, it is truthful, the running backs have to get more touches. Adams, Pendergrass and Harris especially need to touch the ball more. Lost in the excitement of the big play potential of the WR's when running the ball is the fact that we have a very talented backfield. Florida State has a great defensive line and has limited all three opponents to under 100 yards on the ground. I expect the Deacs to get at least 150-200 yards on the ground because of the sheer number of times we will run the ball, but I don't think a lot of those yards will come up the middle at all.

I expect Fisher to pack the box early and make Price show them that he can beat them with his arm. If he can, then Wake Forest has a fighting chance, if he cannot, it will be another long day for the Deacs on the road.

I expect a much better performance tomorrow than I saw last Saturday. I believe that last Saturday was not necessarily a fluke, but it was just the perfect storm for Stanford. Wake Forest has to show improvement tomorrow and at least a modicum of pass defense. If they do not do this, the hope for a bowl this year will all but go down the drain.

I do not expect a victory, and think we will get a backdoor cover of the 20 point line that Vegas had at one point (it has been taken down now because of the speculation that Ponder may not go tomorrow). I will be happy if the defense makes some plays in the secondary, gets some pressure on Ponder/Manuel, and shows better form overall than we saw last weekend.

It may not be this close when it is all said and done, but I think Grobe has gotten to the guys this week in practice and we will show up playing with a lot of pride and intensity. If we can match the first couple of touchdowns for FSU and keep it respectable at the half, I will be pretty happy.

As always, I will be watching the Deacs tomorrow and will not turn off the television no matter what the score is. Last week I said some things in the heat of the game that I did not mean, and I am definitely going to tone it down to temper my expectations for the coming weeks. I am proud of Wake Forest football no matter what and I don't want it to seem as if I am ever personally embarrassed by them, even if I become upset during the game.

Feel free to comment on anything and everything. I will try to answer any questions to the best of my ability, and I really do recommend anybody that made it through my jumble of an article to check out Tomahawk Nation and their extensive preview of the game tomorrow. Thanks and Go Deacs!!!