Inside the Numbers with Bart

Share All sharing options for: Inside the Numbers with Bart 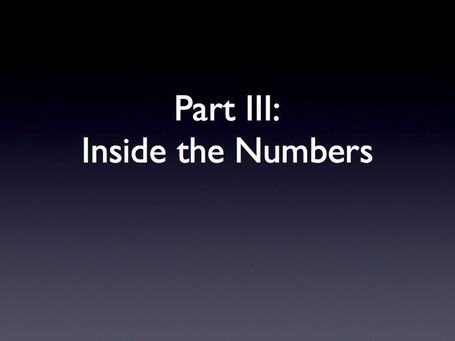 As I'm sure everyone has heard by this point we traveled to Stanford last weekend and absolutely destroyed the Cardinal. As far as I'm concerned we're the best team in America.

Wake is set to take on the Seminoles on Saturday to extend our winning streak at Doak to a titillating three. We've decided to bring Butch Davis' nanny to the game to write some papers for FSU players so we have at least one good reason to even go to Tallahassee.

4: The number of true freshman who have started at QB this year in the FBS, including Wake's own Tanner Price

8: The number of sacks West Virginia had against Maryland on Saturday

0: The number of sacks West Virginia had against their first two opponents

3: The number of sacks N.C. State had in a row against Cincinnati on one possession last Thursday night

13: The number of sacks Florida State has on the season, which is first in the nation.

15: The difference in the number of points this year by Oregon in three games (169) and the bottom five teams of the MWC (UNLV, Colorado State, Wyoming, Brigham Young, and New Mexico; who have 154)

.9: Yards per carry Wyoming is averaging so far this year, last in the nation

8.2: Yards per carry Nebraska is averaging so far this year, first in the nation

$6.863 million: The amount of money Colorado is forfeiting next year in conference revenue from the Big 12 so that they can leave after this academic year for the Pac 10.

13: The number of teams in the FBS which are 3-0 with all three victories coming against FBS opponents.

12: The number of tackles Wake's starting safeties combined for against Stanford on Saturday night.

1: The number of number one votes Texas received in the AP poll this week. I guess squeaking by Texas Tech and beating Rice and Wyoming is much more impressive than pounding Penn State. I also guess that this voter doesn't watch football and is probably Jon Wilner.

1: Number of times Jim Harbaugh has challenged a fumble up by more than 5 touchdowns when his starting defense wasn't on the field and the opponent was inside their own 10 yard line and there were under 10 minutes left in the game.

29: The number of teams with less than 58.7 total points so far this year

1: The number of times I could find where a team has ever scored a touchdown on their first 8 possessions in the history of college football (Stanford vs. Wake on Saturday night).

7: The number of teams who have given up more passing yards than Wake has this year.

0: The number of those teams in a BCS conference.

7: The number of third down conversions San Jose State has so far this year

6: The number of turnovers San Jose State has so far this year

340: The number of passing yards teams from the state of Arkansas are averaging so far this year (Arkansas, Arkansas State)

2: The number of wins the Sun Belt has against non-Sun Belt FBS competition.

15: The number of games in a row in which Devon Brown has caught at least one pass.

131: The most points a Wake Forest football team has scored in three consecutive games since 1939.

62: The over/under for the Wake/FSU football game

63: The number of points Florida State will score in the first quarter

52-20 Florida State: My prediction for this weekend's game. Until our defense proves they can stop someone I won't be picking teams to score less than 40 points. Wake has won two in a row in Tallahassee and I'm sure that the coaching staff has been reminding the team that they shouldn't be losing to Wake in football ever, much less at home three times. Let's hope Wake gets a win this weekend, but I won't be holding my breath.