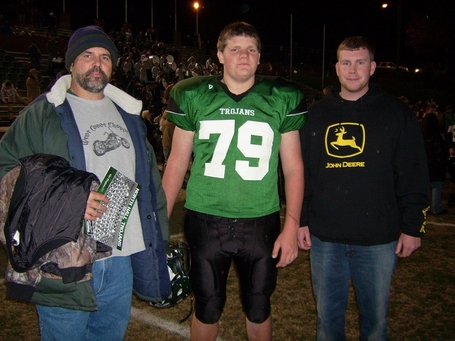 We at Blogger So Dear are fortunate to interview many athletes and stars to put on our website. The close-knit community at Wake Forest makes it possible to get to know the athletes, as well as the family of the athletes. I think this is one of the things that makes it so unique to attend a smaller school like Wake.

I got the chance recently to exchange words with James Blitch, the dad of offensive lineman Daniel Blitch about Daniel's recruitment, the season so far, and any other thoughts he had on joining the Wake Forest community. I hope y'all enjoy reading this as much as I did!

As a side note, I left the punctuation and exclamation marks as it was originally to really convey the character that Mr. Blitch has!

>How does Daniel (and yourself for that matter) like Wake Forest and Winston-Salem so far? How has he adjusted to the workload at Wake?


>Talk about the recruiting process that Daniel went through before deciding on Wake Forest. What other schools did y'all have in mind? What was the most important thing that made Daniel choose Wake Forest over the other schools?

Daniel and I have been together and Very Close now for many years;  him helping me in our jobs with the family business, and I being with him all of his years in Football.

I knew there would come a time when he would have to move on, So when Coach Lobo came to Daniels High School to see him, and at the end of that day offered Daniel a full ride at Wake Forest, It was a bitter sweet day for me and the start of a wonderful journey for Daniel. We really did not think much about the offer the first few days afterward, but something stuck in my mind that coach Lobo said. " Daniel is a special kid, and I hope we get him! If we do you have my word we will take good care of your son, he will be a Great one for us, I can see it in his eyes, he has that fire of a Winner in his eyes." That really resonated in me because Daniel had started in 43 games and only lost 7 in his career. That caused me to pick up the phone and call coach Lobo.

We talked for a couple of hours that night, it was then that I promised him we would come to Wake Forest for a visit. After meeting Head Coach Jim Grobe and all the staff, seeing first hand the school and facilities I knew that this was a school that Daniel would love! I could Feel it !  Daniel had many offers from other schools near and far, UGA O-Line Coach Stacy Searels  wife told me when we were at Georgia for a visit that Stacy had called her one day when he visited Daniel at North Hall High school and told her "Baby, I found us a PuP up here in Hall county !!! she said that he was so excited to have found Daniel !  We also had a great time with our visits at Auburn University with Daniel. Vanderbilt University was also a school we had looked at. But none felt quite like Wake, it just must have been meant to be.

We had traveled to a lot of schools and did most of the same things that we did on our visit to Wake Forest but one thing stands out to me more than anything else, it was the Honesty and Sincerity of Coach Lobo. Every single thing he told us has been 100 percent truth.  Every time we talk to our son (each and every night) he sings the praises of Wake Forest University! He has very hard days with football and class, but he always is positive and wants to excel for the school and himself.

I remember the day that Daniel called coach Brian Knorr and told him he wanted to be a Demon Deacon !!!  Daniel carried his cell phone all day in his hand,,, at 7pm he looked at me and said, Daddy, I am gonna call Wake. I said Daniel it feels right to me, I'm Good with it if you are ! and he did !!!

And the rest is history.

I will state this as a matter of fact, If it were not for Coach Lobo and our conversations with him,
I doubt Daniel would be at Wake Forest, he made that big of a difference in our decision.

Daniel went through the summer class load and now is into the Fall Load and Football, he LOVES WAKE FOREST plain and simple, It is hard work but that is something that Daniel is used to. I Know Daniel, He will not rest until Wake is back at the Orange Bowl !!!   We are here to support him and the Demon Deacons every step of the way !
Wake Forest University, you have our pride and joy, and we are very proud that our son picked Wake Forest !!!


>Daniel is listed as 6'6, 322, would you say this is accurate and do you think he is going to grow anymore?


>What is it like to have an "off-year" in the sense that Daniel is not playing right now as a parent?

Well I tell ya, Daniel was not happy to start with, and was trying to learn the complete Wake offense in 3 weeks !!! LOL  I would have loved to have been at practice, I know he had to have driven coach Lobo crazy !!!!  Daniel was really beating himself up when he would miss a block, Coach told me to come up and take him out to dinner and get his mind off the field for a few hours one day, so we did.  Daniel thought that he would just go right up to Wake and Play !!!  just like he did in high school. I kind of thought that it would be a TALL order for a freshman lineman, but was always supportive of Daniel wanting to play.  Later at Dinner, I told Daniel to lift his foot off the Gas Pedal, that he was red lining the motor!!  !!!! and to support and let coach Lobo teach him the Offense.....I said HELP Coach Lobo and do whatever he tells you to do !!!  He knows what he is doing Daniel. From that day forward, Daniel has settled down and is learning to be a left tackle for Wake Forest !  Does it bother us that he is not playing, not really, yes it would be fun for us and Daniel, but I think the Extra Year will pay off big time for Coach Grobe and the Demon Deacons in the Long Run !  We are here for results for Daniel and WFU and I think  that is what we will have when all is said and done.


>Do the coaches want Daniel to stay at center or move him to guard/tackle?

Daniel started practice at Right tackle, he was then told to play Left tackle and coach said he was a natural left tackle. He has experience all over the line. Coach Lobo has said from the beginning,  he is a tackle.

>What are your thoughts about the season so far, and also what do you think about the game on Saturday at Stanford?

As a Football Team I think we are Perfect ! 2-0  LOL  I think the Deacs have done exactly what they wanted to do. WIN!  With any team there will be adjustments as we roll , but overall so far so good. No Doubt Saturday will be a Test, a long Flight , and a crazy kick off time !  and with a young team.

I have Faith in this team !!!! I have Faith in our coaches I think they can surprise a LOT of people this year !!! How good is Stanford?  I guess we find out Saturday. One thing I do know, I have never seen a Tree that North Carolina could not make into a fine set of stairs !!!!!  LOL


>Any other thoughts that you want to throw in there are welcome as well!

The People of North Carolina can be Proud of Wake Forest and the Deacs !!!!
I know for a fact that a Lot of People in Georgia are !!!!