Tuesday Thoughts: The Price is Right

Share All sharing options for: Tuesday Thoughts: The Price is Right 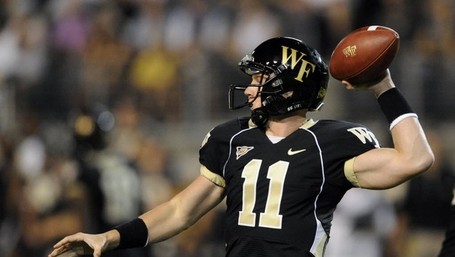 Here at Blogger So Dear, we are blessed to have unheralded access to players, coaches and information surrounding the program, even if we are not officially credentialed by the school. This leads to us having a lot more information and breaking news than a lot of others do on SB Nation, or any other school blogs. A downside to this is what Martin and all of us really feel is a lack of opinions that we post on a regular basis.

Now if any of our readers know us in real life, or even through the internet (which is very similar to our actual personalities, unlike some other online personas), we all are very, very opinionated, especially about Wake Forest. I think all of the writers here on BSD will tell you that in their minds it is:

Our goal is to get more of our thoughts out there to generate positive and negative discussion about Wake Forest athletics. Without further ado, this is the first of my weekly Tuesday column, which will inevitably get a better name in the hours, days, weeks to come because I am not feeling all that creative at the moment.

With the start of this new column, it is only right that I chime in on something that will also be brand new this week: true freshman Tanner Price will be making his first career start for the Wake Forest Demon Deacons this week 3,000 miles away from home in Palo Alto, CA against the #19 ranked Stanford Cardinal.

For many college players this would be problematic timing; fortunately for us Tanner Price is not most college players. On Saturday, Price was slated to play the backup role to Ted Stachitas and get a couple of possessions in there to get experience should anything happen to Stachitas during the year. Unfortunately for Stachitas and Wake Forest, the injury came earlier than anybody would have expected. Although the extent of Stachitas' injury is not known at the time, Price had to play the remainder of the game after a finger/hand injury prevented Ted from playing.

In what was eerily similar to another #11 from 4 years ago, Price stepped in and led the Deacons to a 54-48 victory over the Blue Devils on 11-19 passing for 192 yards and 3 TDs/1 int. Price will now be called on to lead the Deacs across the country to battle a ranked opponent in prime time on Saturday night.

Before the season started, I was already on the Price bandwagon (Martin, Jake and Bart will all back me up on this even if y'all don't believe me). Tanner has an absolute cannon for an arm (a southpaw nonetheless), ran a similar offense in high school where he led his school to the Texas 5A championship last year, and in my opinion just has IT. The kid knows how to win and makes his team better. He also has that Wake Forest "aw shucks, I just did what I could and what Coach Grobe asked me to do to try to make my team better and get the win" attitude. To sum it up in a sentence, from what I have seen so far, Price is the epitome of the Wake Forest athlete and what we want to see.

In the past couple of weeks Wake Forest athletics has experienced a bit of a PR hit with the Tony Woods situation. Coupling that with everything else that is going around in the ACC, (see UNC academic scandal, not to mention the embarrassing loss that VT suffered to James Madison on Saturday) Wake Forest could use a bit of a pick -me-up right now. For the next four years I truly believe that Tanner Price will be that pick-me-up and more.

With a young and the potential to be the most talented all-around receiving and running back corps that Wake Forest has ever seen, Price has so many weapons to attack with it is ridiculous. Marshall Williams, Devon Brown, Chris Givens, Josh Harris, Josh Adams, Brandon Pendergrass, Michael Campanaro, just to name a few of our options. Keep in mind this excludes Tommy Bohanon, Terence Davis, Quan Rucker, and Scooby Jackson, who will no doubt see a lot of playing time the next 2-3 years.

I am going to go ahead and make a bold prediction now that will likely be met with scorn and a mocking comment section: in four years, Tanner Price will have better overall numbers (touchdowns, passing yards, yard per completion, running yards for a QB), than Riley Skinner did. I cannot promise that Price will have more wins than Skinner did over his four years (this would be a ridiculous assertion to make right now considering Skinner had 11 and 9 wins in 2 years), but I think Price will go down as more heralded in the record books.

By no means do I think Price will make us forget what Skinner did and meant to Wake Forest football. Nor am I downplaying how important he was during the 2006 OB year and the 3 years after. I just believe that Tanner Price will carry on the torch of fantastic #11 QB's and keep the Wake Forest offense on a level that it was at last year.

To look at this year alone on the offensive side I believe that this makes us much more lethal. Ted Stachitas is a fantastic runner, as we have seen (143 yards on 19 carries, 2 TD's on the year). I think that if Lobo utilizes Teddy Stacks as Urban Meyer used Tim Tebow his freshman year behind Chris Leak, in wildcat formations with the option and QB draws/counters/plunges our offense will add a different aspect to it. This really shouldn't be too difficult because Tanner Price and the offense already run this style. It would simply get pair of fresh legs on, especially in the red zone (an area that has been problematic for us the past few years), and get more touchdowns rather than settling for three points.

I realize that I may be jumping the gun on a lot of this and am simply just another person piling up expectations that Price has on him, but I really think he can manage it. Wake Forest probably will not win Saturday against Stanford (for several reasons that I could write another lengthy article on), but I am very excited to see how Price handles his first road game because his poise in the pocket and decision making could easily keep us in the game and ultimately decide whether or not we make a bowl this year.

Here's to Tanner Price this year and on! We know you have it in you buddy, go out and represent Wake Forest like you did against Duke and we will all be proud of you. Go Deacs!

One Last Thing: Kudos to the coaching staff for being aggressive on fourth down play calls, especially on the no-huddle call on 4th and 1 in the 2nd half that resulted in a touchdown. With more play calls like that, and a more aggressive mindset overall, I believe that our offense will take another step forward to getting more 6's and less 3's. Great job Lobo!