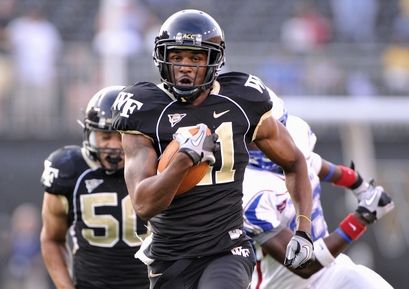 In the second-highest scoring game in ACC history, the Wake Forest Demon Deacons moved to 2-0 on the year with a 54-48 win over the Duke Blue Devils in the conference opener for both teams. Jump started by freshman quarterback Tanner Price, senior wide receiver Marshall Williams, and senior safety Alex Frye, the Deacons were able to overcome a high powered Duke passing game to extend their winning streak over the Devils to eleven.

The Deacons scored on the first drive of the game, capping off a nine play, 89 yard drive with a Ted Stachitas run from 23 yards out. It was the second consecutive game in which Stachitas began the game as the starting quarterback and scored on a long running play on the first drive. As a sign of things to come for the afternoon, Duke responded quickly with a touchdown after a good return by Patrick Kurunwune. It was evident after the first two possessions of the game that the game was going to be the offensive shootout that many people expected and the touchdowns continued to add up throughout the rest of the first half. After a quick three and out on Wake's next possession, Duke took their first lead of the game going up 14-7 through a 9 yard run by Cooper Helfet. A Stachitas pick ended a promising Wake drive as the quarter came to a close with the Devils up 14-7.

A moderately high scoring first quarter turned into an all out offensive attack in the second quarter as Wake and Duke combined to score touchdowns on seven of the quarter's ten possessions. A poor ball from the Duke long snapper resulted in a Wake Forest fumble recovery for a touchdown by sophomore speedster Chris Givens, knotting the game back up at 14 apiece. After an interception by Alex Frye on the next possession, Tanner Price saw his first action of the game and quickly led the Deacs downfield on a ten play, 83 yard drive. Price closed the drive with a one-yard run to put the Deacs back ahead 21-14, starting a span of four touchdowns in under 3 minutes. Duke scored on their first play of the next drive on a 70 yard bomb from Sean Renfree to Connor Vernon. Wake decided to break out a trick play of their own on the next possession when Marshall Williams took a double reverse and launched the ball to Chris Givens who scored on an 81-yard play to keep put Wake up 28-21 with 7:39 remaining in the second quarter. The Givens' touchdown marked the first time Wake Forest history that the Deacs have scored more than one 80 yard touchdown play on the entire season. When Price hooked up with Williams for a 13 yard pass just over two minutes later, the Deacs looked set to cruise to victory up by two touchdowns at home. Duke however responded quickly behind a Desmond Scott 63 yard run with 2 minutes left in the half, and a 13 yard touchdown pass with :41 seconds left to Austin Kelly after a Wake three and out. The fans were finally able to catch their breath as the game with to halftime tied at 35.

The second half featured a more concentrated defensive effort by both teams and featured Tanner Price grabbing the majority of the snaps. Price found Williams on a 38-yard touchdown pass with just over 8 minutes left in the quarter to put the Deacs up by a touchdown, but the snap was high and mishandled by holder Turner Faulk and the extra point attempt failed which could have proved costly moving forward in the high-scoring game. The only other points either team was able to garner in the third quarter came from the foot of Duke kicker Will Snyderwine when he booted through a 46 yard field goal with 3 minutes left in the quarter to cut the Wake lead to 41-38, which remained the score at the end of three.

The fourth quarter was full of tension as the rain which had been misting for most of the day began to pick up, causing a definite change in playing conditions. Wake struck first in the final quarter grabbing a 48-38 lead off of a Price throw to Danny Dembry on a 23 yard slant route. Duke responded with another field goal from Snyderwine to cut the lead back to one possession, but Devon Brown ultimately capped the game off with a 6 yard run putting Wake up for good 54-41, after another misplayed snap and hold by Wake's PAT unit. Duke had a late chance after scoring on a 51 yard route to cut the lead to one touchdown with just under two minutes left, but were unable to get the onside kick, leaving Wake with a 54-48 thrilling home victory.

The Wake offense continued to impress for the second consecutive week. Ted Stachitas got off to a good start at the helm of the offense despite failing to complete a pass on four attempts. Stachitas brings good vision from the pocket and knows when to tuck the ball under and move upfield, which showed as he led the team in rushing with 9 carries for 77 yards. The biggest issue with Stachitas at this point in the season is his inability to read the defensive secondary and get the ball accurately to his receiver. A couple of throws during the game Givens or Brown would be flashing as a check down, with Ted ultimately deciding to either take off from the pocket or hone in on his primary target on the play.

Tanner Price was by far the most promising player on the offensive side of the ball as he confidently led the Deacons down the field on multiple drives when he was in as quarterback. Price appears to be by far the best passer on the team. He has a cannon which sometimes catches receivers off guard, and appears competent at reading the secondary seen in his slant route to Dembry across the middle in the second half.

Freshman running back Josh Harris looked very impressive in the fourth quarter when he came in to help run the clock out. Harris looks to be the fastest player on either side of the ball and can find space where there seemingly is none. The backfield of Price and Harris on the last two drives was the most confident and able our offense looked all day and Harris should look to continue getting carries going forward if he keeps up his fast paced start.

Marshall Williams and Tanner Price both won ACC honors this week. Williams was the offensive back of the week catching two passes for two touches and adding in touchdown pass to bring his career passing stats to 4-4. Price was named the ACC offensive rookie of the week going 12-19 for 191 yards, 3 TD's and 1 INT as well as garnering 56 yards on the ground on 10 carries.

The offensive line continued to look good in spots. Facing a weak Duke defensive line, the Deacs were able to give their young quarterbacks time and open up holes on rushing attempts. All in all the O-line was not one of the major concerns this week, but it will be interesting to see going forward how the line fares against larger, more physical opposing lines.

Brown and Givens both played well, chipping in a touchdown a piece from the flex receiver spot and keeping the defense at bay both catching and carrying the ball from their position.

With the final score to this game at 54-48, it would be disingenuous to claim that the defense played well, or even moderately respectably. For all intents and purposes, the defense was weak in nearly every sector. Duke came into the game with a good passing game and Renfree made the Deacon secondary pay. Josh Bush and Kenny Okoro started at the corner position and produced two totally different results. Okoro continued his stellar play on the season and was only beat severely once on the day, on Duke's last touchdown of the day where he got turned around and burnt for a 51-yard touchdown. Bush on the other hand was for lack of a better word, terrible. He managed to come up in run support and stop the Duke backs on a couple of plays, but was abysmal in coverage. Time and time again he was beat on sideline routes, caught sleeping on slant routes across the middle, unable to make tackles on screens to the receiver in front of him, was generally unable to shut down his area in a zone, and completely whiffed on a Duke pass to the outside, allowing the receiver to waltz in for six. Bush was taken out of the game at halftime in favor of true freshman A.J. Marshall who was able to avoid any major mistakes in his time opposite Okoro.

Alex Frye was the best player on the day for the defense, making two interceptions at critical times and extending his total on the year to three through two games, which has him atop the NCAA interceptions list with only one other player. The linebacker corps looked slightly better on run support, but far too many backs are getting through to the third level which falls on both the backers and the defensive line. Wilbur continues to be the best player on the line in my opinion, and it appears that Wake is not getting great pressure to the quarterback up the middle when there is a limited blitz from the second and third tiers of defense.

The Deacons came out with a win and stretched out their record to 2-0 on the year in what was a must-win for a young team at home. Duke played well and Cutliffe is a fantastic coach, but they came up on the wrong end of the Wake-Duke football battle for the eleventh straight year. Wake takes to the road for the first time next week against a solid Stanford team who is ranked 19th in the nation. Stanford is coming off a 35-0 beatdown of in-state rival UCLA and Heisman hopeful Andrew Luck will look to exploit the weak Wake secondary as many times as possible. Hold on to your seats Deacs' fans, it's going to be a wild ride this year.