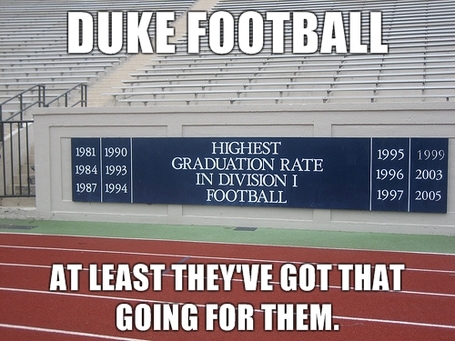 Back in action means back to work and we're happy to get in the swing of things again. So you guys get a little treat...the roundtables are here again! This week Bart, Riley and myself (Jake's still off doing whatever it is that Jake does) are talking Duke. Saturday's contest will be a big test to gauge what the Deacs are made of, so click on through the jump to read on.

Martin: Here we are again. It's been awhile since we've done one of these guys. Did you miss it?

Martin: Riley, did you miss me? Or are you just sad that Jake isn't here?

RJohnston: Kind of both. I did miss you. It's been a crazy month though. Glad things are getting back to normal and we can all spend time together online while completing our otherwise worthless lives.

Martin: Well, I certainly wouldn't go that for Riley, but regardless, it's good to be back and rolling. The Presbyterian game is in the rearview mirror, so looking back, what did we take away from that game that'll help us predict tomorrow's matchup against Duke?

RJohnston: Although the Presybterian game was a walkthrough for Wake Forest, it did shine a light on a lot of things that we can do better. We ran the ball very well, but our passing game was lackluster to say the least. Only time will tell whether or not that was a result of Grobe's conservative playcalling against an inferior opponent, or if it is a problem that will plague us all year.

BJohnston: I would agree with that. We found out that our running game is going to be an integral part of our offense. I find this strange that we're attempting to run the ball a lot from the shotgun offense, but it has worked for teams like Florida in the past couple of years as well. I look for all three of our running backs to play and play well against a porous Duke defense.

RJohnston: Agreed Bart. I would also venture to say that our wide receivers will have big running days too with the counters, sweeps, options and orbit reverses. With the speed Brown and Givens have, it is a scary sight to matchup against.

BJohnston: It's good to have Givens back, regardless of what one thinks about Grobie's decision to reduce his suspension (along with Kevin Smith).

Martin: Now let's talk about the offense a little bit more. One big point of discussion is the quarterback decision. Coach Grobe has said the reason he pulled Tanner Price's shirt was due to concerns that Ted Stachitas might not be able to stay healthy. Is that a smokescreen? Just how safe is Stachitas's job right now?

BJohnston: For now I think that Ted's job is safe, but I think that Tanner is the quarterback of the future. Tanner has only been here for 2 or 3 months and he's already close to Ted if not even with him in the QB race. If we see Price play (which Grobe intimated in the Presby post-game) I think that he will perform very well not only for a true freshman, but for any quarterback. If Ted does get injured, I think Tanner will take his starting job and never look back.

RJohnston: I agree with Bart wholeheartedly, Tanner Price is the quarterback of the future. I think that Jim Grobe knows this as well. If you listen to him in the press conferences he is constantly gushing over Price and what he has done so far at Wake Forest. I thought that Price looked pretty good against Presbyterian even though the stats would not back me up.  He has a cannon for an arm and can really stand in there and take the pressure while looking downfield.

I do think that Ted Stachitas is very well suited to run this option offense that Lobo and Grobe have installed for this year. Often times Ted will get flustered and rollout when he doesn't need to, which leaves him vulnerable to getting hit. His speed is definitely a plus. I am eager to see how he does against a better defense this weekend.

Martin: Do you think we'll have ourselves in a situation where both quarterbacks will be used? Or will Price be eased into the offense? Will Stachitas be the starter until "something goes wrong?" Or will both quarterbacks end up being used by season's end for different purposes?

RJohnston: I think that Grobe is going to use both quarterbacks. I don't necessarily agree with this philosophy because it doesn't allow for the offense to get into a flow with one guy. Price will be introduced more and more each week to the offense and in my opinion will take over at some point during the year. If Price continues to out play him in practice and games then he may just take the job away from Stachitas rather than Stachitas losing the job.

Martin: That sounds fair and pretty close to my assumption as well. Annnnnddd it looks like Bart has wandered off somewhere. So it's just you and me Riles. Let's talk strategy--what are you expecting to see out of Saturday's game vs. the Blue Devils?

RJohnston: I expect to see a shootout and a close game, pretty much like every other year in this series recently. The game is going to be one of conflicting styles. Duke is going to throw the ball with their quarterback Sean Renfree, who has two outstanding talents in Conner Vernon and Donovan Varner. Wake Forest is going to rely on the rushing attack like we did last weekend. Duke has a proclivity in their 3-4 defense to shut down outside runs. I think that this will lead to more I-form rushing attacks (there were no snaps under center for us last week), and a healthy dose of Tommy Bohanon at fullback, assuming his shoulder is healed.

What do you think we can do defensively to shut down Renfree? It looks like our boys in the secondary have their work cut out for them.

Martin: I honestly think this secondary is going to get better over time. They're extremely talented and they just need to get settled in. But the best way to help the secondary out is to make the quarterback nervous out there. So that puts a lot on the front seven and that's an area we absolutely have to improve.

But, a saving grace is the fact that Duke cannot run the football. As Bart pointed out in his Inside The Numbers yesterday, Duke is awful, and I mean awful at running the ball. So if we can stuff the run and bring pressure, while still allowing the linebackers to sit back in zone coverage over the middle, we could force Renfree into some tough spots.

RJohnston: I think we could see some changes in the secondary in the coming weeks. I think that Alex Frye is much better suited at the cornerback position that he played during the spring. Kenny Okoro is a stud and teams are going to be avoiding him all year. I am a little nervous with Bush covering Vernon or Varner, especially if he is going to be picked on.

I think an underrated matchup is the Wake Forest d-line vs. the Duke o-line. If Kyle Wilbur, Joey Ehrrman, and Nikitia Whitlock have their way and make a living in the backfield, Duke could have all sorts of trouble. Along these same lines, I think the X-factor in the game is our secondary against Renfree. Wake Forest will like control the ball for a good portion of the game on the ground, and it could come down to how quickly Duke can strike back.

What do you think the X-factor in tomorrow's showdown is Marty?

Martin: There are two x-factors in my mind. Wake will be able to run the football. That's a given. And Renfree should be relatively successful. So it comes down to quarterback play for Wake and special teams. We've seen how shaky the kicking game has been the last couple years and this could be a situation where one missed kick, even in the second quarter, could determine the game.

RJohnston: I came in this season with a positive outlook on Newman because of the mental work he put in during the offseason. He didn't start out too well on Thursday and he is going to have to improve his kicking to help out our offense when it stalls. I am pretty excited that Popham got to 40 yards per punt. Hopefully he can keep that up.

Martin: So let's make it happen--what are your predictions for tomorrow's game?

RJohnston: I think it will start off like last year in Durham. A lot of fireworks in the first quarter. If our secondary and create a turnover or two that would be absolutely huge. I think Wake Forest will win 38-31 on a late touchdown run by Josh Harris.

RJohnston: What about you Marty?

Martin: Pretty close to you honestly. For some odd reason I think we're going to take a punt or a kickoff to the house. I see ToBo smashing one in and Adams having a 100 yard day. Receivers should make the most of their touches. The D is going to get burned on a couple plays, but will have at least one timely big play. I have Wake squeaking it out 31-28.

Martin: Wow look who decided to show up at the end here. Thanks for gracing us with your presence once again Barto. So that's a wrap. The game is ESPN3 and ESPN Gameplan tomorrow....GO DEACS!