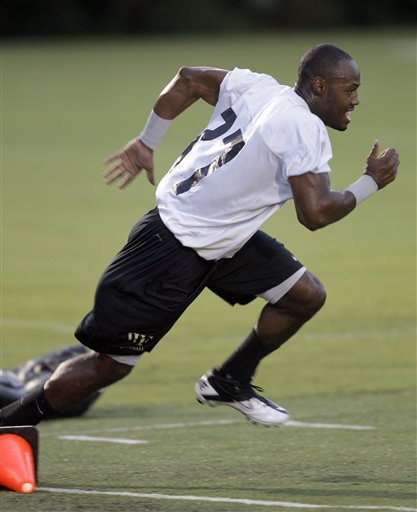 Wake Forest's football season is slated to kickoff around 6:30 at Groves Stadium against the Presbyterian Blue Hose. The Deacons look to get the year started off on the right foot with a solid win over relative D-I newcomer Presbyterian, who struggled to an 0-11 record last year against a schedule which featured no FBS teams. Wake has big shoes to fill as school hero Riley Skinner will not be on the field for the first time in four years. It will be a tough transition at times and it will be interesting to see how head coach Jim Grobe and offensive coordinator Steed Lobotzke handle a young and relatively inexperienced offense.

Position-by-position breakdown of what Wake Forest has to work with this year:

The bad news: After 4 years at the helm of the Deacon offense, Riley Skinner graduated leaving the spot open for competition.

The good news: There were four viable candidates to help replace Wake legend Skinner and after a long battle stretching across spring practice into the fall, RS-SO Ted Stachitas grabbed the starting spot for the first game of the year.

Stachitas, a native of Ponte Vedra Beach, Fla and graduate of Nease High School, looks to be a dual threat quarterback who can make the most of his chances on the ground and through the air. It will interesting to see the type of offense the Deacs play as they work a new quarterback into the offense, but the playbook figures to be predominantly out of the shotgun with limited to no formations from directly under center. Most reports point towards true freshman Tanner Price being the backup, but one thing to watch is if Grobe and Coach Lobo decide to redshirt Price this year or leave him in the backup position. RS-FR Brendan Cross and RS-JR Skylar Jones are currently behind both Price and Stachitas on the depth chart, but many Deacon fans hope to see Jones get some snaps at QB in a Wildcat-esque formation.

The QB position remains a major question mark for the Deacons and will be a major influence on whether the Deacs excel or flop on offense.

Wake returns a wealth of talent at the running back position as RS-SR Josh Adams returns as the starting back. Adams, the 2007 ACC Rookie of the Year, is one of the Deacs' offensive leaders and will look to establish a potent running game. With his backfield mate Skinner gone, Adams will likely get more touches throughout the year and help alleviate pressure on newcomer Ted Stachitas. Behind Adams in the lineup sit RS-FR Josh Harris and RS-JR Brandon Pendergrass. Harris is one of the fastest players on the team this year, and has been clocked at a 4.34 40 time. Pendergrass will look to return to his freshman form when he led the team in rushing with 528 yards.

Also likely to see some time and carries in the backfield are receivers Devon Brown and Chris Givens (after his two game suspension to start the year for violating team rules). Brown and Givens will see plenty of runs called their way as they line up in the slot and are put into motion on sweeps. These plays have been an important part of Coach Lobo's offense in the past, and with Yloo and Givens' speed, there is no reason why this should change this year.

The full back position looks promising as Tommy Bohanon is set to take over the starting position. Bohanon has been a beast in the off season and can bench 500+ pounds. He has suffered a minor injury to his shoulder a couple of times throughout the preseason and may be limited in the Presbyterian game, but will be a great blocking back as well as a good player to hand the ball off to in the backfield. The backup spot appears to be open for grabs and so far in the preseason scrimmages FR. Jordan Garside has been quite impressive and may be the right man for the spot.

The receiving corps is not only the most talented part of this year's offense, but it may be the most talented corps in the history of Wake Forest football. The wide-outs are led by RS-SR Marshall Williams, who is coming off a year where he finished with 60 receptions and 687 receiving yards. Also looking to contribute opposite Williams is another Williams, SR Jordan Williams who is looking to shake off a tough year in 2009 and become a possession receiver down field with Marshall.

The Deacons also return Chris Givens, Devon (Yloo) Brown, Lovell (Scooby) Jackson, and Danny Dembry. Also of note is high school sensation Michael Campanaro as he tries to fit into the rotation as well. Campanaro, a Maryland high school standout, has blistering speed and falls into the mold of a Givens or a Brown type receiver.

RS-SO Terence Davis looks to get back into the speed of things after missing his entire freshman season with a torn ACL. Davis, who tore his ACL on August 17, 2009, was highly touted as one of the best receivers on the team prior to his injury and will look to return to this form when he gets back onto the field.

The receiver position features fierce competition for playing time and is more than likely the deepest corps in Wake's history.

Andrew Parker and Cam Ford both return this year and look to feature mainly as blockers in Lobo's offensive scheme. The TE position has been utilized less and less each year during Lobo's reign and there is no reason to believe that this year will be any different. Both Parker and Ford have good hands and are willing to do whatever is asked of them to keep them on the field. Ford played quite well in one of the last scrimmages, catching a short pass, breaking three or four tackles, and scampering to the end zone for a quite impressive touchdown.

Of all the question marks on this year's Wake Forest team, the biggest has to be the productivity and ability of the offensive line to step up and open holes for the offense. At times throughout the 2009 season (most notably during the Death Valley debacle), Riley Skinner was absolutely pounded into the turf by the opposing defensive line as the Deacons looked out-sized and totally outmatched.

The line will look to replace starters Chris DeGeare, Barrett McMillin and Jeff Griffin as starting a starting G. Joe Looney and C Russell Nenon return. The line also returns Michael Hoag and Doug Weaver, who should both see significant playing time. At this point it is hard to say who will be playing what position on the line, but these answers should be somewhat cleared up when the depth chart is released on August 31st.

Wake has moved nearly entirely to the shotgun and will look to run a somewhat obscure mix of runs and passes from this formation. For the Deacs to be successful, they will need to open gaps on the ground to take pressure off the new set of quarterbacks, while at the same time getting the ball to the talented set of receivers. This year promises to be one of the more exciting ones as nearly no one knows what to expect (other than a win against Presbyterian).

The one thing that we at Blogger So Dear can say is we are thrilled that opening day is on Thursday and we can't wait to see the boys take the field again.