A Quick Look At The UNC Football Scandal

Share All sharing options for: A Quick Look At The UNC Football Scandal 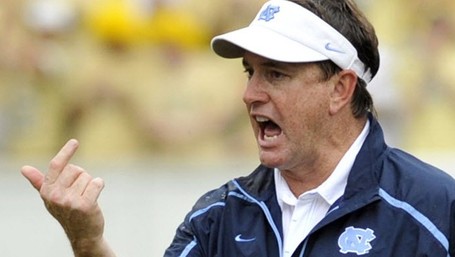 Typically the summer is a time for the off-season and rest for college fans and athletes alike. Recaps of baseball games are shown all night long on Sportscenter and every now and then a big sporting event like the World Cup or the Olympics pop up. Up until the middle of July, this summer was no exception. However, around the middle of July reports started surfacing about possible infractions committed by several "unnamed UNC football players" regarding illegal benefits received from agents or former Tarheel athletes. Over the past month many stories, both substantiated and unsubstantiated, have popped up and it is difficult at this point to sort speculation from inside information. Click through as Blogger So Dear attempts to simplify and delve deeper into the current football scandal at the University of North Carolina.

Late June: The NCAA notifies UNC that they are going forward with an investigation regarding current football players receiving improper benefits.

July 12th and 13th: The NCAA visits the Chapel Hill campus to interview players. Initially it is reported that 13 players are interviewed by NCAA agents and that one of these players is senior star Marvin Austin.

July 16th: Joe Schad breaks the story of the UNC scandal, reporting that there is an "extensive NCAA inquiry into the North Carolina football program". In this report, and with subsequent tweets, Schad announces that the NCAA inquiry isdirected towards Marvin Austin and improper benefits which may have funded a trip to South Beach back in May. A source tells Schad that football players are asked to provide phone records, records of rent payments, and records from their twitter accounts. This same source describes the off-season in Chapel Hill as "hectic" for sports agents. It is also reported that there is a possible connection between Marvin Austin and former UNC standout Kentwan Balmer, a first round pick for the 49ers in the 2008 NFL Draft. Schad characterizes the NCAA inquiry as a "major investigation" and draws comparisons to the situation USC faced earlier in the year.

July 17th: Questions begin to arise if Marvin Austin's twitter was the source of the investigations as several tweets and pictures surface on the internet stating that Austin was in South Beach in May. The funding for this trip is seemingly the center of the improper benefits investigation by the NCAA.

July 21st: North Carolina Secretary of State and Senate hopeful Elaine Marshall announces that the state intends to open up an investigation related to the role of agents in college sports.

August 4th and 5th: The NCAA returns to Chapel Hill for two more days of questions regarding improper benefits.

August 13th: UNC hires Rick Evrard, a lawyer with a background in NCAA rules compliance, to help assist and navigate the program while the investigation proceeds. Evrard previously helped out in the same capacity with Connecticut's and Kansas' athletic programs. There is also widespread speculation that the results of the investigation are to be released on this date, this however fails to come to fruition.

August 14th: Kentwan Balmer fails to return to 49ers training camp after being given two days off by head coach Mike Singletary to deal with what is characterized as "personal problems." The 49ers seek to reclaim part of Balmer's contract money.

August 16th: Balmer is traded from the 49ers to the Seahawks for an undisclosed future draft pick.

August 26th: Joe Schad tweets that UNC has self-reported academic problems stemming from nine players and their relationship with a tutor. A source tells Schad that these former players may have had papers written by this tutor. The most prominent of these players are Marvin Austin, Bruce Carter, and Robert Quinn. Schad goes on to report that Austin stated former Illinois cornerback Vontae Davis helped fund some of his South Beach expenses. Schad tweets that "Butch Davis' woes leading into the LSU game are now critical in nature" and that the nine players being investigated by UNC were relegated to the scout team during the August 25th practice.

UNC has also scheduled a press conference for tonight (8/26) regarding the NCAA investigation. AD Dick Baddour and Head Coach Butch Davis are expected to make an appearance and speak to the crowd. We will do our best to keep things updated as the investigation progresses. With the beginning of the college football season looming only a week away, UNC's football program certainly appears to be in dire straits.