Share All sharing options for: Football Season Once Again 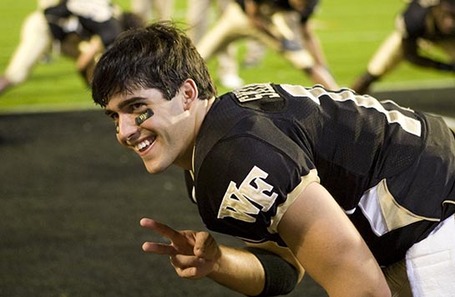 As the heat continues to beat down across the southeastern United States and the dog days of August rush fully upon us, it is nearly impossible to avoid hearing the smacking of pads against one another on college campuses across America. Long before the first snap takes place, every team gathers for summer school, individual summer workouts, and intense sessions in the weight room. This hard work finally begins to come to fruition once again each year as the number of practices until the season begins slowly trickles down to zero.

Each year these practices bring new challenges, new questions, and hopefully answers to questions which may have plagued the team the previous season. This year, as the 2010 Wake Forest Demon Deacons are set to start their season, there are many more questions and challenges than possible answers. The end of the Skinner era marks a new beginning and a new opportunity for a young quarterback to rise to the challenge and fill the enormous shoes Riley leaves behind. The offensive line promises to be a point of contention for the Deacs as well as Lobo surely hopes to continue his potentially lethal dose of the power running game up the middle. The defense looks to step up and improve upon last season's performance which ultimately caused Wake to miss a bowl and finish up the year at 5-7.

No matter what the questions are which come with the beginning of the new year, one thing is simple: College football is back!

Wake Forest comes into the 2010 football season looking to go to their 4th bowl in 5 seasons. Following last year's somewhat disappointing 5-7 record, the Deacs are plagued with a series of challenges to overcome if they wish to improve upon this mark. With Riley Skinner's departure after four years at the helm of the team, it will be critical for Wake to find a competent quarterback before moving forward. The battle itself consists of 4 relative unknowns within the public sphere: Skylar Jones, Ted Stachitas, Brendan Cross, and Tanner Price.

Skylar Jones is likely the name that most followers of Wake football would most easily recognize. Jones comes into this year as a RS-JR, having spent the most part of the previous two years floating around from position to position. Skylar was originally recruited as a dual threat quarterback and certainly has many weapons in his repertoire if he manages to win the position. With the ability to take off down field when flushed out of the pocket, he certainly has the potential to wreak havoc on opposing defenses. The knocks on Jones include arm strength and questionable field vision, two things which will have to be addressed if he is to begin the season as the starter.

Another name which ardent followers of Wake will recognize is Ted Stachitas. Ted is a product of Nease high school in Florida and comes into this season a RS-SO. He spent last year on the bench behind Skinner and backup Ryan McManus. Stachitas has been heralded for his ability to tuck the ball under and take off up field similarly to Jones. He more than likely has a more powerful arm and better vision than Jones, however, and also has the upside of being a year younger. In the past Grobe has stated on several occasions that if there is a tie or a close battle between two players, he will favor the younger player for the position.

The remaining two players in the battle are RS-FR Brendan Cross and FR Tanner Price. Cross is from Georgia and redshirted last year. Price is from Texas and is a true freshman. Both of these players are more typical pass first quarterbacks although both have shown to have a decent amount of speed during summer drills and early season practices. Price played in the spread offense in Texas and has been touted from the beginning by recruiting experts as having a strong arm and good vision down field. Cross showed off his arm in the spring game and was thought by many Wake fans to be the best option before the team broke for the summer.

No matter who wins the QB battle, the Deacs need to hope he is half the player that Skinner was over the past few years for Wake to get back to their recent trend of success.