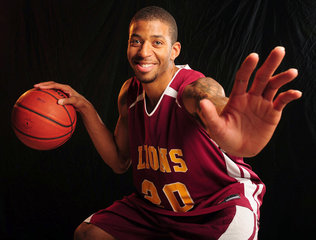 Monday night brought some great action to the spectators out at FCD, led by a remarkable game by J.T. Terrell and a game winning shot by Travis McKie. As the summer progresses and classes come closer, we all begin to get a better feeling for how the team is going to shape together for next year.

Click through for more details on Monday night's action.

Monday night brought perhaps the most entertaining night of basketball so far for the Triad Pro-Am Summer League. The first two games featured three different teams with Demon Deacons on them and these teams did not disappoint. J.T. Terrell, Tony Woods, L.D. Williams, and Chas McFarland took the floor in the larger gym against Triad Commercial (D-III Guilford's basketball team). Both L.D. and J.T. got off to hot starts as they combined for the team's first 14 points, but J.T. quickly began to steal the show all for himself. Behind a lethal combination of outside shooting and an ability to get to the rack, J.T. found the bucket to be three times its normal size and poured points in from everywhere, finishing the first half with 25. L.D. chipped in with 14 and showed a great ability to hit the outside shot.

J.T. found the basket to be just as huge in the second half and continued his scoring rampage, firing in outside shot after outside shot. Although we do not have official stats regarding how many shots Terrell took, he probably took around 23 total shots and probably made around 13 to 15. Terrell showed a great ability to get down the lane, although part of this was probably due to the size of the team they were playing. He was able to switch hands with ease around the basket and is more than comfortable finishing with both hands. Most importantly though to most Wake fans, he is solid from the stripe and made all six of his attempts after being a 90%+ free throw shooter in high school.

Summer League or not, J.T.'s performance tonight was one of the more remarkable things I've ever seen in an actual game where two teams were trying. One can argue all they want about the lack of defense being played in these leagues and it's hard to disagree too much, but regardless of defense it's hard to stop a pure shooter from knocking down a 25 footer if you have a hand in his face or not. When it was all said and done, J.T. finished up with 47 points and bricked a couple of long range attempts down the stretch to reach the half-century mark. Wake fans should be very, very excited about what this young man brings to the table. He will certainly be fun to watch this season to see how he grows.

Tony Woods looked pretty solid in this game as well, although it was hard to judge since Guilford didn't particularly have anyone inside who could stop him. Woods continues to do a good job of boxing out and grabbing rebounds, but was called for a travel during the game and needs to continue working on his footwork when he has the basketball. Woods finished up the night with 10 points and around 6 to 8 rebounds.

The other first game pitted fellow Deacon squads against one another. Travis McKie's team took on Nikita Mescheriakov, Ari Stewart, and Melvin Tabb's team. Stewart, Tabb, and Mescheriakov's team jumped out to a solid start as both Ari and Travis revealed their long range capabilities in knocking down outside shots. As the game progressed, Ari continued to knock down these jumpers and finished up the night with 26 points while primarily playing a hybrid 2/3 position. Melvin Tabb looked solid inside as well, but mostly from the free throw line where he went a fantastic 8-8, finishing with 10 points. Nikita continued to show good touch inside and hit a couple of fadeaways to finish with 9 points.

While these three players each played a solid game (Ari's quite frankly was excellent), Travis McKie stole the show when he drilled a three from the right wing as the buzzer went off to give his team a 71-70 victory. McKie finished the night with 24 points and had a good game. Every now and then Travis tended to fire up an unnecessary three or two, or reach in on defense but these things can be easily tinkered with by Coach Bzdelik. McKie too showed that he is solid from the stripe, knocking down the majority of his attempts.

Aside from these two headliner games, Ty Walker continued to look better in the league finishing with 6 points. Walker shows a greater ability in blocking out and has good touch around the basket. Surprisingly, perhaps the best part of his game is his passing ability which he consistently shows by passing out of the double team down low to find the open man on the opposite side of the basket.

Tony Chennault, also playing on Ty's team, handled the point guard duties and did so quite well finishing with 19 points. Chennault looks very calm and composed at the helm and has very good court vision, dazzling the crowd at times with passes seemingly only he envisioned. The only knock on Chennault was his free throw shooting tonight, where he went 1-7 from the charity stripe. Tony and Ty's team jumped out to a big 21-3 lead, before holding on to win it 61-60 down the stretch

In the final game of the night, CJ Harris and Carson Desrosiers' team faced a scrappy Champion side. Harris, who is sidelined for precautionary measures by an ankle injury, watched the game from the sideline while laughing with roommate Ari Stewart as his team took care of business. Carson showed a good ability both inside and out, knocking down a couple of fadeaways off the glass after stepping outside and firing in two long range shots. Also impressive in this game were Mount Tabor graduates Mike Grace (Yale) and Josh Hicks (Old Dominion) who sparked the team from the backcourt. This team, alongside JTT/Tony and the Holcomb-Faye's, have their eye on the title.

All-in-all it was another exciting night during the summer for the Wake basketball team, and hopefully we will get back out there on Thursday with more reports to come!