Griffin back and ready to go

Share All sharing options for: Griffin back and ready to go 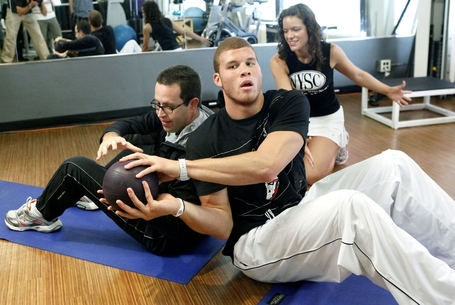 I had the chance to talk to Blake Griffin on Tuesday. Griffin was headed to New York to work with Subway's Jared Fogle, who is currently training for a marathon. You can find my full article after the jump, as Griffin discusses being forced to sit due to injury, what advice he'd give to the incoming rookies and meeting the late John Wooden.

Despite missing all of his rookie season with a stress fracture in his left knee, Blake Griffin hasn't stopped moving. And with a fresh start, the 2009 number one pick in the NBA draft is ready to make his mark on the court.

A former McDonald's All-American, Gatorade Player of the Year, Naismith Award winner and John Wooden Award winner, Griffin is used to playing-and succeeding-so being forced to watch from the sidelines for an extended period of time was a new experience for him. But the time away gave him a new outlook on the game of basketball.

"It was tough not being able to play all year," Griffin said. "I just had to concentrate on getting back for this year. Not being able to play, you definitely see the game differently from the bench and get a new perspective when you're not on the court. It's about noticing other things about players or being able to closely watch players on the other team. You just see things that hopefully you'll be able to apply to your game throughout your career."

Learning was a theme in Griffin's first professional season. He made the adjustment from college to the pros, learned how to manage his time and worked with the coaches to improve his knowledge of the game.

"I got to have a special relationship with the coaches," Griffin said, "and sit with them in some games and see how they dealt with certain players and how they handled certain things. I wasn't sitting next to them every game, but in timeouts I would stand behind the huddle and the coaches and listen to what they had to say. So really, I got to notice things from different perspectives.

And to be honest, [adjusting to the league] wasn't that big a change. You just have to keep yourself focused. You have more downtime and the travel is definitely more, but you just have to use your head, and stay out of trouble."

A solid foundation is what has helped Griffin get to where he is, and a lot of that has stemmed from the advice he has been given along the way. From understanding and studying the game, taking care of his body and getting enough rest to make it through the year, he is focused on sustaining the achievements he's had at every level thus far and learning from the experiences he has had along the way.

"The thing I remember most was him coming and speaking to us-the way he spoke," Griffin said. "When he spoke no one said a word and everyone was listening. He would sit down and just recite poetry off the top of his head. It wasn't like two lines, it'd be 12, 14 lines. I was just impressed with how much knowledge he had about the game and everything he knew over the course of his life."

And Griffin seems to have carried this, as well as other tips and advice he has been given from players like Chris Kaman and former teammate Marcus Camby.

With the Clippers picking eighth in the 2010 NBA Draft, just as he has received advice from NBA veterans, he had some tips for the incoming rookies as well.

"Chances are you've got the basketball side down," Griffin said. "You've gotta say, "I wouldn't be in the draft if I couldn't play." But you just have to make sure off the court you take care of your money and you know everything that's happening. You have to know what everyone is doing around you and keep an eye on the entourages."

The former Big 12 Player of the Year has also been keeping an eye on the big shakeup in the Big 12 due to conference realignment. Despite the loss of Colorado and Nebraska, he believes that the conference will continue to flourish.

"It's crazy and I wasn't expecting it," Griffin said. "But I'm glad the Big 12 stuck together for the most part and there weren't huge changes in the conference-it wouldn't have been good if there was a big shake up. I think they have a good thing going and I'm glad that things are ok. With teams like Colorado, it was probably good to get into a different place and get a fresh start, but for the most part, it's good that teams like Texas, Oklahoma State and Oklahoma are staying."

The 21 year old is fully healthy and excited to get back on the court. And he hopes the Clippers can take their team to the next level. With rumors tied to the big free agents like Chris Bosh, Dwyane Wade-and of course, Lebron James, the Clippers have a chance to improve. Part of that will be addressing needs in tonight's draft.

"We need a tweener that can contribute not only offensively, but defensively. A guy who can rebound and give us a presence, especially defensively. But in our spot, we need to take the best available player."

Along with rehabbing, making the rounds on the interview circuit and studying the game, Griffin has also enjoyed a successful partnership with Subway. And on Tuesday, he shared some of his training tips with Jared Fogle, who is currently training for a marathon. The Subway spokesperson recently finished a half-marathon and he and Griffin did cardio, crosstraining, stretching and dumbbell work.

And in the marathon season of the NBA, just as Fogle stresses healthy living with Subway, Griffin is singularly focused on staying healthy and proving that he can be the next great star in the League.