Share All sharing options for: Confession: I don't care about conference realignments. 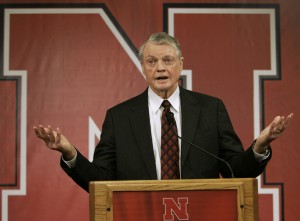 I know that sounds odd; it's a huge story right now, but for the life of me, I just can't even force myself to read anything about it. Yes, I've noted who is going where and checked them off the list, but I am completely ambivalent to it all. Why? It's a numbers game--money is all that matters to this thing. I hate change; and we just went through this whole spiel a few years ago. So what, you say? Well, I'm going to tell you.

Am I happy the Big 12 isn't breaking up to scatter across the Mountain West, WAC and the Big Sky or something? Yeah, that's nice. But excuse me if I'm not exactly excited about Colorado to the PAC-10. Oh boy. Colorado sure has been relevant in their sports lately. The biggest news they've had in the last 10 years was the Gary Barnett stuff, the Bzdelik to Wake stuff and of course...this.

And Nebraska to the Big 10. I sure am EXCITED about the prospect of the big-time Huskers vs. Iowa Hawkeyes games in the future in basketball. That'll be some must-see television on the Big Ten Network in the future. Listen, maybe it's just because I'm not as big into college football as I am about basketball, but I think that's the key to this for me. When the Big East went bonkers, it was for basketball. That had an impact. Cincinnati and Louisville were bigtime additions, and secondarily, their contributions to the conference in football as well really helped the Big East establish some stable relevancy and parity on the gridiron..

I also think the fact that nothing has really happened in the ACC may have some bearing on why I don't care. Sure, if some teams move around--Maryland bolts for the Big Ten because they're sour they aren't a team in North Carolina, or Clemson gets their inferiority complex and decides to become Florida and Georgia's whipping boy in the SEC, I'll be upset. But the ACC already went through this, and while BC has become a good fit academically and competitively, the Virginia Tech addition still doesn't make a ton of sense outside of their football success and the geographical location. But that withstanding, they worked in the overall picture.

I'm just worn out. This has been going on for months and every ten seconds there's another rumor, more info, another press conference, more speculation. ESPN went nuts over it and I haven't stopped hearing about it. Conference realignment is the new Bret Favre, the new Vick dog story, the new Tiger Woods sex scandal. And I'm over it. Give me the World Cup or even the Izzo rumors over this any day.

When it's all said and done, I'll go back to evaluating it, get used to it and move on. But I'm sour over the underlying reason for this: money. Football is king in college athletics and that power gets abused time and again. Between TV contracts, the BCS and booster/recruiting scandals, something's gotta give. And I don't see conference realignment helping that cause.