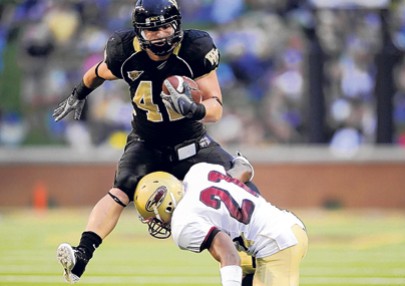 With spring sports nearly finished and the academic year winding down, Blogger So Dear took some time to catch up with Wake Forest rising sophomore Tommy Bohanon of the football team to discuss the spring practice, next year's team and being stuck on a desert island.

BSD: Tommy thanks for taking time out of your finals week to talk to us.

BSD: So spring practice just wrapped up, your second spring practice as you came in last January a semester early. If at all, how was this spring any different from last spring?

Tommy: I was much more comfortable this spring with how things were going. Having already gone through spring practice once and having a season under my belt definitely helped my confidence. The biggest difference this year was getting acclimated to a different type of offense. Last year we ran a mixture of sets and this year we're focusing more on the option. It's a totally different kind of football. It takes a while and hard work to learn.

BSD: If you could do it all over again would you still come in a semester early? It must be hard leaving your friends behind to finish high school and move on to college.

Tommy: I would definitely do it again. I still got to go to prom and still got to go home to graduate which was great. The experiences that I had and the lessons that I learned by coming in early were invaluable to me as a football player. It also helped me get ahead in school and get used to teachers before I had to balance fall practice and games with academics.

BSD: Obviously spring practice is different from fall practice in that there is no immediate goal in sight with games each week. Can you talk about what these differences are and if there is a different mindset between the two?

Tommy: With spring practice, we're mainly focused on learning the play book and spend more time running drills at the beginning of practice. Once fall gets here, we're tweaking the plays we learned in the spring and putting it all out on the field. There isn't too much of a different mindset between the two, we work hard in both practices knowing that is what it takes to get better.

BSD:  There is a premium on both blocking and the ability to run the football in this style of offense, two things you're very capable of doing. With a shift to a more option-oriented offense, is your role on the team going to change a little bit?

Tommy: Well I've been working out with the backs (tailbacks and fullbacks) during spring practice and have been getting more touches out of the backfield. I've been told I'll be seeing the ball a bit more than I did last year and can help fill the role that Kevin (Harris) played in the offense.

BSD: That's something we'd all like to see, someone who has a burst of speed and can also run over defenders as we saw in the spring game. What are your summer plans, doing anything fun or different?

Tommy: No not really, going home (to Florida) as soon as I take my last final and taking it easy for a bit. We have to be back on campus for the second summer school session and I'm looking forward to that, but I'm happy to be home for a while. I'll probably take a vacation with the family and workout to make sure I stay in shape.

BSD: It must be tough having your summer cut relatively short by football. When you guys arrive on campus in the summer what are you allowed to do and not allowed to do in terms of contact with the coaches?

Tommy: Well we have workout plans that we all stick to as well as go to class. We can talk to our coaches on an individual basis, but aren't allowed to have any kind of meetings with a coach where they are writing on the board, giving us group instruction, or running through the drills. While it is tough to have a shorter summer, it's always good to get back to football after taking some time off.

BSD: Definitely is. Coming into next season, the Deacs face Presbyterian and Duke in the first two weeks. This is a stark contrast from the first two games last year when you guys had Baylor and Stanford right off the bat. Does the schedule make any difference in terms of perspective or mindset for the team?

Tommy: No not at all. I come into every game knowing that I have to give my best regardless of who we are playing. Whether it be Baylor or Presbyterian we treat every game the same and prepare as hard as we can. We never come into a game thinking the other team will rollover, because any team can win on any given day.

BSD: Which game next year are you most excited for?

Tommy: The Stanford game, it's going to be great getting to travel out across the country and play a team we normally wouldn't get to play.

BSD: After you are finished playing football in college or professionally, what would your dream job be?

Tommy: I'd love to have a job as a trainer or run a gym. Ideally it would be one of those jobs where athletes go to enhance performance for the combine drills before the draft. That would be an awesome job.

BSD: Who would you say you emulate your game after on the football field?

Tommy: Mike Alstott, he was the player I always watched and tried to copy growing up.

BSD: If you were stranded on a desert island with one other player on the football team, who would it be?

Tommy: It would have to be Joe (Looney), if I'm going to be stranded on an island I'm going to need to be laughing and Joe always makes me laugh.

BSD: Tommy, thanks for the time and good luck this summer and next year. We'll all be pulling for you.