Getting to know Tyler Lewis

Share All sharing options for: Getting to know Tyler Lewis 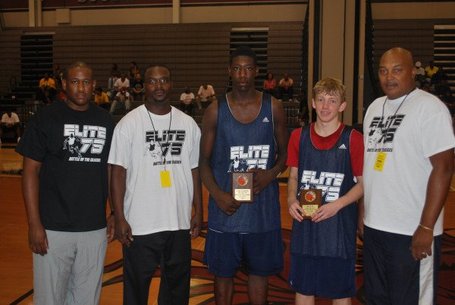 Tyler Lewis is an outstanding basketball player at Forsyth Country Day High School in Winston-Salem, being offered by 10-15 major basketball programs already. He is also a very entertaining person who has many different interests that range from the NBA to making home videos based off of MTV programs.

Despite it being Tyler's 17th birthday on Friday, he took the time after school to talk about himself a little bit off of the basketball court.

Click through to read about Tyler Lewis, the person...

Lewis is finishing up his sophomore year at FCD and currently managing his basketball career on the weekend in AAU for Team Loaded. Playing on a talented team that includes Jackson Simmons (2011), Adjehi Baru (2011) and Tony Kimbro (2011), Lewis led Team Loaded to a win at the Pittsburgh Jam Fest and followed that up with a semifinal appearance in the Boo Williams Tournament, where they fell to a very talented Canadian team.

"We have a lot of talent on Team Loaded, and are also very close. It is very difficult to come back from two weeks of not seeing each other and compete at the level it takes to win an AAU championship, but we did very well in the Boo Williams Tournament."

Team Loaded played 7 games in the Jam Fest and 6 games in the Boo Williams Tournament. They defeated a very good team in the CP3 All-Stars (Bishop Daniels, Dezmine Wells, P.J. Hairston and Rodney Purvis) on their way to the championship.

Aside from basketball, Tyler Lewis is also impressive off the court. His crowning achievement that has reached 3,000+ people on YouTube is the homemade MTV Cribs that he made with his brother Colby Lewis (who plays basketball at Charlotte).

After laughing about the topic Lewis said the following: "It was definitely a spur of the moment kind of thing. We had about 10 minutes left before we were going to the airport to play in a tournament. We also realized we had about 10 minutes left on the camcorder, so we were looking for things to do. Colby turned on the tv and there was an episode of MTV Cribs on. We decided then that we wanted to do it. It turned out really well for a homemade video and we figured we had nothing because if it was bad we just wouldn't post it anywhere."

There is a nice flash of the Lewis' personalities in the video and I would encourage everybody to click on the link and see for themselves the Lewis household and Colby and Tyler.

Tyler is also very interested in the NBA and has been paying attention to the playoffs. His favorite players are Kobe Bryant (I was disappointed a bit when I heard this, being an ardent LeBron fan) and Steve Nash, who he models his play after. "Steve Nash is a guy who makes passes and takes his team to another level, but when it comes down to it, he can score and get the job done." Tyler said.

Although he supports both Kobe and Nash, Lewis admitted to being a big Lakers fan and believes they will pull it out in 6 (which I agree with).

When Tyler is not on the basketball court, he enjoys spending time with his friends and watching television. His favorite shows are Pardon the Interruption and Around the Horn. I was pleased to find out that he also found Family Guy hilarious and watched it whenever it was on.

This summer, when he is not traveling to AAU events, Lewis plans to spend time with friends and try to see friends he has met while traveling play their games and support them. Team Loaded is traveling to the Tournament of Champions on Memorial Day Weekend, and then will head to Charlotte, Myrtle Beach, Las Vegas and Phoenix (after taking June off). Lewis is very excited to be going to Las Vegas, but was disappointed he wasn't 18 because this is where he is very interested to go.

Tyler's role models are his brother and dad. "When I played for my dad (on the Carolina Flight), I didn't have a hard time differentiating between dad and coach. Out on the basketball court he was always coach and there were rarely problems with that. I wanted him to be hard on me not only so I could be the best that I could be, but also to make sure it didn't seem like he was playing favorites with me." Tyler said.

If Lewis' plans to play basketball in college and beyond do not pan out, he wants to be a basketball coach. He wants to work with kids and help them understand the game and maximize their potential because that is what he enjoys doing himself.

It was a lot of fun having the chance to talk with Tyler because he is a really well rounded person on and off the basketball court. After talking to him for twenty minutes, it is easy to want to see him succeed on the basketball court. I look forward to watching Lewis on the court at FCD the next two years and also in college wherever he winds up.

I am eager to speak to him again in the fall to recap his summer AAU performances as well as preview the upcoming FCD season and his recruitment, which gets more and more intense by the day.