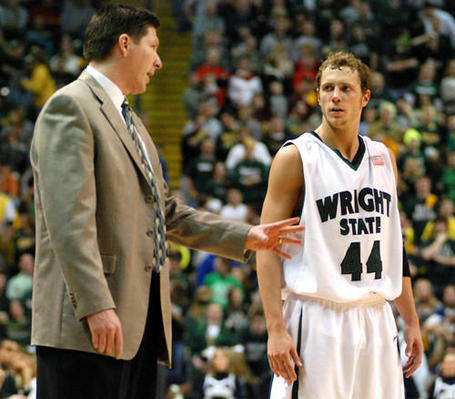 As it is appearing more and more likely that Brad Brownell is realistically in the running for the Wake Forest job, it's time to look a little deeper at the Wright State head coach.

Brad Brownell certainly won't bowl people over with his pedigree, but there is something to be said about his consistency as a head coach. Since becoming the head coach at UNC-Wilmington, he has won 20 games in six of his eight years, including all four years at Wright State. He has three tournament appearances under his belt, two with the Seahawks and one in his first year at the helm coaching the Raiders.

Pretty impressive stats for a guy who was let go from UNC-W. The background story on that is a bit muddled, but from all accounts, Brownell wanted a raise and the AD flatout said no. For a coach who had just been to the NCAA Tournament, Brownell felt that he deserved the bump in pay and he packed his bags for Fairborn to coach in the Horizon League.

The book on Brownell is pretty basic. He's a decent recruiter (2010's class includes four guys rated as an 80 or higher on ESPN), he is young (41), his teams play good defense (61st in the country in defensive efficiency) and they play smart. They will not wow you offensively, they were 316th in the nation in tempo.

Simply put, Brad Brownell is about as safe as they come. He won't ruffle feathers, he's won some coaching awards, he'd represent the university well and he'd likely be able to contend for NCAA Tournament appearances most years as long as his recruiting success at the mid-major level can translate to the ACC. And in all likelihood, he would retain one if not two of Dino's assistant coaches. There is a fear though that due to Brownell's plodding offense that he may lose one or two of the 2010 guys, who were brought in expecting a faster-paced offensive mindset.

But, that said, didn't Boston College just fire a guy who sounds just like Brad Brownell? Didn't Wake just fire a guy who won an NCAA Tournament game last season? Is Brownell really a guy that will excite a fanbase that is disillusioned after collapses the last two seasons?

I'm not saying that Brownell wouldn't be a good fit and have the chance to be successful. What I am confused about is this: if Ron Wellman fired Dino Gaudio to make a statement and a commitment to winning in the post-season, did he really do that just so that he could hire Brad Brownell?