The search for the next Wake Forest head coach

Share All sharing options for: The search for the next Wake Forest head coach 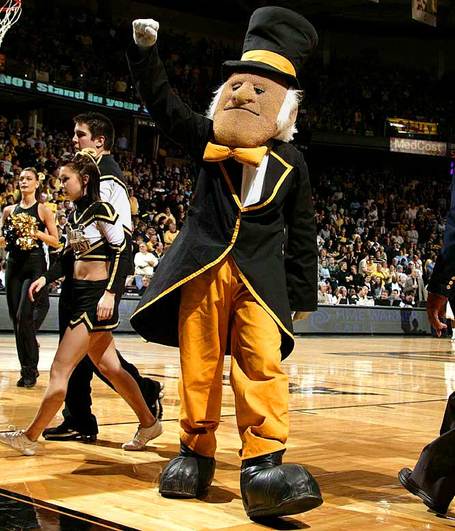 The past 24 hours have been crazy for Wake Forest fans. Every head coach in the country has seemingly been thrown around, feasible or not.

Here is a look at the most realistic candidates for the Wake Forest coaching job, as well as a couple of reaches.

Click through for a look at candidates for the Wake Forest head coaching job.

Brad Stevens- The majority of Wake Forest fans (as well as many other schools) would like for Ron Wellman to hire Brad Stevens. He led the #5 Butler Bulldogs to the National Championship game this year, and came within 3 inches of being crowned the champs. Stevens is 89-15 (49-5 in the Horizon League) in 3 years at Butler and has made the Big Dance in each of those years. It may be tough to lure Stevens away from Butler because the Bulldogs are a preseason Top 5 team if Hayward, Mack and Howard all stay. Wake Forest and Butler are similar schools in terms of academics and size, which would appeal to Stevens to go along with the lure of the ACC and bigger money.

Travis Ford- Although a relative unknown around ACC country, Wake Forest fans may remember him as the point guard for Kentucky in the early 90's. He currently coaches at Oklahoma State and was at UMass for three years before that. His career coaching record is 168-138 (Cambellsville, Eastern Kentucky, UMass and OSU). What many Demon Deacon fans will not like is his unproven success in the postseason. He has made the NCAA tournament only three times, and advanced to the second round only once. If Ron Wellman fired Dino for lack of success in the postseason, Ford does not seem like a legitimate move for Wake Forest.

Scott Drew- The current head coach at Baylor University rejuvenated a program that was set back years from a murder scandal involving players on the team. Drew has been able to successfully recruit to Waco, Texas to compete in the Big 12 against Texas and Kansas. After taking over in the 2003-2004 season, Drew suffered through 3 years of mediocrity (to put it kindly) before the NCAA punishments took full effect. In the past three years Drew has made two NCAA appearances, and made the NIT title game in the year that he did not make the tournament. Drew is only 109-103 at Baylor, but given the circumstances Drew has done a phenomenal job. Some people have questioned Drew's recruiting tactics, which may turn Ron Wellman off of him given the "fit" that Wellman is looking for.

Gregg Marshall- Marshall is the head coach at Wichita State University currently. He has his ties to the Carolinas from 9 years coaching at Winthrop University. In those 9 years Marshall made the NCAA Tournament 7 times, but only once advanced past the first round. Marshall has spent the past three years at Wichita State, compiling a workmanlike 53-47 record that includes 25-10 this past season. The knocks on Marshall are that he does not have big time head coaching experience, he has not proven he can win in the postseason, and his personality may not fit in well at Wake Forest. Although he has experienced success at lower level schools, I do not know if Marshall is the guy for the job.

Brad Brownell- Only the diehard college basketball fans have heard this name before. Brownell is the current head coach at Wright State University. This past season he led the Raiders to a 20-12 record and no postseason. Brownell coached at UNC-Wilmington for four years and led the Seahawks to two NCAA appearances in four years. His overall record at Wright State, and UNC-W is 167-85 with three NCAA Tournament appearances. He has yet to win a game in the tournament, and probably lacks the pedigree that Wellman is looking for in his next hire.

Tubby Smith- Perhaps the best known coach of all those on the list so far to the average fan. Smith was the head coach at Kentucky for 10 years, leading the Wildcats to an NCAA championship in his first year. He reached four Elite Eights, two Sweet Sixteens, and never failed to advance past the first round, while making the tournament every year. Smith has been to the NCAA Tournament 16 out of the last 17 years at four different schools. He is currently coaching at Minnesota University, where he has been for three years. His overall record is 450-184, and has proven he can win at any coaching job at any level. I think Smith would be a great hire to elevate Wake Forest to challenge Duke and UNC every year for the top two spots.

Brian Gregory- Gregory is currently the head coach at Dayton University. In seven years at Dayton, Gregory has compiled a 150-80 record with four postseason appearances (two NCAA appearances). Dayton captured the NIT Championship this year, and in the process defeated North Carolina, which is always something we should look for in a coach. Gregory was an assistant coach at Michigan State before Dayton, and stems from the Izzo coaching tree, which is also a positive. I am not sure that Gregory has proven he can win on the big stage, and only has one NCAA tournament win to his resume.

The coaches above are the ones (in my opinion) that have the best shot of being hired by Wake Forest. I am sure that Wellman is shooting for some high names as well, and a name that has come up is Jay Wright (head coach at Villanova). I believe that Wright is happy at Villanova and wants to stay there, but he would be a great hire. Dana Altman has been talked about on a lot of websites, and some even had him headed to Wake Forest for a tour (although these rumors have been refuted by reputable inside sources). He has been at Creighton for 16 years, and is likely not what Wellman is looking for.

Coaching searches are always a time of uneasiness because a team has given up the sure thing and decided to take a high risk, high reward approach to moving the program to a higher level. For Wake Forest, I am sure that Ron Wellman knows exactly what he is doing and hopefully our hire will bring us to the next level that we have not been able to reach under previous coaches.