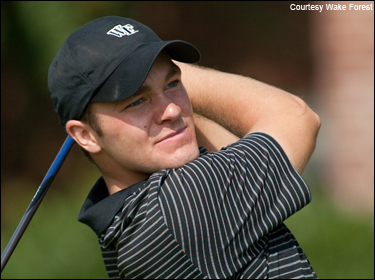 Despite a hot start on Friday at the Old North State Golf in New London, NC, the Wake Forest men's golf team finished tied for 3rd place with Duke at -9.

The Georgia Tech Yellow Jackets made a mockery of the field by shooting a blistering -23 and defeating the 2nd place Florida State Seminoles by an astonishing 13 shots.

Click through for results from the tournament and a look at individual standings...

Chesson Hadley of Georgia Tech won the ACC individual championship by shooting a -10 total of 206 (69-66-71). The rest of the Georgia Tech golf team followed suit as the Yellow Jackets relied on consistency to dominate throughout the weekend.

Wake Forest started hot on Friday, led by sophomore Lee Bedford's 67 that put him in 3rd place headed to the weekend. On Friday, Wake Forest as a team shot a 280 that put them in a tie with Duke in 2nd place, one shot behind Georgia Tech. Aside from Bedford, Brendan Gielow, and Travis Wadkins both shot under par to help the Deacs set the pace early in the day.

On Saturday, after another great start, Wake Forest found themselves on top the leaderboard, but that would not last for long. Gielow fired a 67, but the best anybody else could manage on the team was an even par 72 (which three other Wake players shot). The 283 put Wake in 3rd place, one shot behind Duke, but eight shots behind Georgia Tech, who managed to shoot a 276 on Saturday.

Despite starting Sunday within striking distance, and even pulling to within one shot at the start of the back nine, Georgia Tech proved to be too much on the back side and dismantled the field with a string of birdies coming from nearly every player on their team.

Sunday proved to be a struggle for the Demon Deacons as Bedford and Wadkins both could not find the form that they had on Friday that propelled the Deacs into 2nd place. Lee Bedford finished with a 76 on Sunday that put him at a tie for 15th place. Wadkins on the other hand, blew up and shot an 82 that pushed him all the way back down to a tie for 36th overall. Brendan Gielow, on Saturday and Sunday, proved why he was the country's #5 golfer according to Golfstat.com, shooting a 67 and 74 respectively, to finish in a tie for 6th overall.

The Deacons wound up shooting and 855 overall and tied with the Duke Blue Devils for 3rd, which is not a bad accomplishment considering by Golfstat rankings Wake Forest should have finished 6th.

The Deacons will continue play in regionals the weekend of May 20-22 to try to qualify for the NCAA Championships June 1-6 in Chattanooga, Tennessee