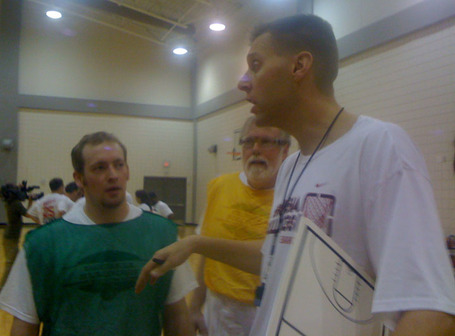 The word out of Winston-Salem is that ex-Kentucky PF Mark Pope will join Jeff Battle and Rusty LaRue on Jeff Bzdelik's coaching staff. Pope, at 6'10", was a member of UK's 1996 National Championship team and played eight seasons in the NBA with the Pacers, Bucks and Nuggets. He also spent some time playing overseas.

Pope was a member of the Pac-10 all-freshman team at Washington before his transfer to UK, where he averaged 8 points and 6.6 rebounds. He also led the team in blocks his senior season with 82. A brilliant student and Academic All-SEC member, after his NBA career, Pope enrolled in medical school before taking a position with the Georgia Bulldogs' coaching staff.

Pope brings a bigman presence to the Demon Deacon coaching staff, which should be critical in developing players like Ty Walker, Tony Woods and Carson Desrosiers. A 41.6% 3pt shooter in 89 attempts at UK, he could be a great help to Desrosiers in particular, who has been known to step out on the perimeter.

This hire solidifies the coaching staff, which now boasts a strong NBA pedigree between head coach Jeff Bzdelik, LaRue and now Pope. Along with Battle, the group has their work cut out with them in securing the 2010 recruits and hitting the trail for the 2011 players. Not to mention establishing a system in place after the firing of Dino Gaudio. Hopefully the hiring of Pope is a step in the right direction.