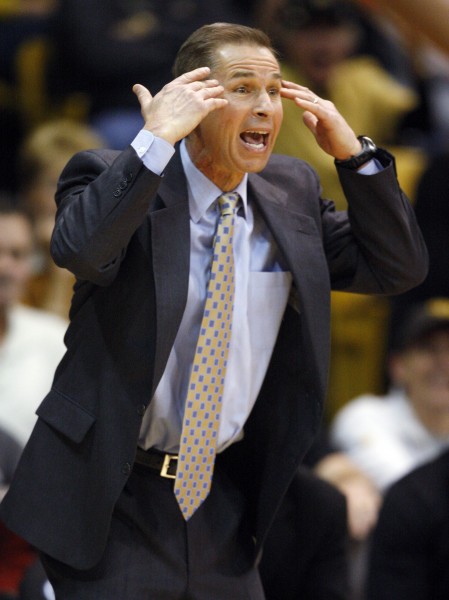 In a move that has been "unofficially official" since the weekend, today's announcement puts the wraps on the Demon Deacon's head coaching search after a week.

Jeff Bzedlik was 36-58 (10-35 in the Big 12) in his three years at Colorado. Before his stay in Boulder, Bzdelik was the head coach at Air Force where he led the Falcons to a 50-16 record and one NCAA tournament appearance. He also coached the Denver Nuggets from 2002-2004 where he complied a record of 73-119 with one playoff appearance

Click through for quotes from Ron Wellman and Jeff Bdzelik from the press conference.


"Good morning and thank you for coming...it gives me great pleasure to introduce our new basketball coach Jeff Bzdelik. After a long review of various coaches of who we had interest, we think he understands Wake Forest...He comes from similar institutions to Wake Forest in Colorado and Air Force...He had one of the best turnarounds in NBA history with the Denver Nuggets and was tutored under the wing of Pat Riley...After leaving the Denver Nuggets, Jeff went to Air Force where he delieverd two great seasons, including one loss where we went out there and came back with a large defeat...Jeff then took on a very tough job in Colorado and he has done a great job there and left them in a place to succeed next season as they have all their players returning next season. It gives me great pleasure to introduce our new head basketball coach Jeff Bzdelik."

"Thank you very much, it is an honor and priviledge to be the next head coach at Wake Forest University...The vision that I have for this program is very simple and clear, we want to do well in the regular season, make it to the postseason, and SUCCEED in the postseason. Style of play is going to be something that our fans really enjoy. We will be very aggressive defensively, hopefully culminating those possessions with defensive rebounds and to pass the ball, play team basketball...I also want these men to have a huge presence in the community and be the men that we all know they can be...Jeff Battle will be joining me on the staff. After I talked to Jeff I went to Rusty LaRue, who they may rename Wake Forest to Rusty LaRue Unversity. Walt Corbean will also stay on the staff because he is a part of the family here too. This is my DREAM JOB, and I am looking forward to the challenge and I will embrace it with all i have.

Q: What is your recruiting philosophy going to be?

A:If you find passionate, coachable, high basketball IQ players who have the ability to pass, dribble and shoot, and care about their future as a student, Wake Forest is the perfect place because of the education you will receive and the high level of basketball in the ACC. We will make them gym rats and mold a really good team together with those character traits. Style of play is very simple: tough defense, attack the rim in transition...I hear these things about the "Princeton Offense;" Princeton is in New Jersey and we are in North Carolina. We scored a lot of points in Air Force and led the nation in games won by 30 points (including a win over Wake Forest). We look to run, at Denver we led the NBA in fast break points. To me, that's how you play the game.

Q:Have you had a chance to talk to the players yet?

A: We met last night briefly and they seem very excited. I told them I know it's been tough, and I will be honest with you, it has been a real challenge with more tough things happening to you that it is almost unfair with Prosser, Mrs. Battle and now Dino's situation. I know that you have dealt with a lot of stuff for anybody, much less college-age students. There are expectations and responsibilities to go to class and take advantage of a wonderful situation here at Wake Forest...I don't think players really understand how good you need to be to play in the NBA...You need that degree because you can't play forever. Your education is so important, get yourself a degree. We are going to start on the court tomorrow and they all seem very engaged.

Q:Have you spoken with Dino Gaudio about the mistakes of last season?

A: I have spoken to Dino and he has been absolutely awesome. I have never asked him anything about anything other than "hello, how you doing? I have tremendous respect for what you have accomplished." In this profession, there are a lot of ups and downs and I wanted him to know that I am here for him and reach out to him as I do with anybody. We have a positive relationship and Dino is an awesome, awesome man, we have moved forward.

A: Nobody puts more pressure on me than I put on myself. I know I have a responsibility here at Wake Forest. This is a great program and a storied program. If you told me to pick one school to go to in the country, I would say Wake Forest. Great athletics, great people, great integrity. It's in the ACC, we have won five out of the last 10 National Championships. Yet I cannot think of a better school that combines athletic and academic success like Wake Forest has...All of the pros that have come through here, the way they have handled themselves, what great representatives of the university. When that happens on a consistent basis, that's a testimony to the people here.

Q: What kind of emphasis is Wellman putting on postseason performance?

A: I want my players to get better everyday. I have taken a lot of programs and improved them throughout. I improved at UMBC, we improved at Northwestern, go to Denver and improve in the best turnaround of all time. Won 50 games in two years with cadets (3 ACC teams in two years). At Colorado I inherited a team that won seven games with no competitive spirit and we improved and had the Big 12 Freshman of the Year last year. If you can do something everyday to get better and improve Wake Forest basketball, the rest will take care of itself.

Q: Do you anticipate, if there are any defections, to recruit this year?

A: I have not been able to call the recruits yet, but right after this press conference I will be on the phone and talk to these guys and once we do that I think everybody will be fine.

Q: Are you prepared for the reaction of the fans and having to win these people over? How do you do that?

A: By being me and having success on the court. Wake Forest is an easy sell. I have been in the NBA for 17 years and there is nobody that can say they have been to the NBA playoffs 9 times, NOBODY. If a player wants to get better as a player and have me impart my knowledge to them, here is their opportunity. I don't worry about that at all, and if people do their homework they will know. I have been on the east coast before in the NBA...I have plenty of connections and ties to guys in the NBA and they are giving me names already because I have been all over the place.

Q: The origin of your name? What did you learn from Pat Riley?

A: Bzdelik is Slovak and my wife is Lithuanian and Polish so we have a melting pot here. What did I learn from Pat Riley? I learned a great deal from him. Attention to detail, teaching, passion. I did every game plan for him for every game for seven years. That seven years seemed like twenty-one years. He is so detailed. That game-plan included the opposition, their tendencies, keys to the game. I would have to do a practice plan to prepare for the game offensively and defensively. I worked closely with Stan Van Gundy on that along with working with players individually (Mashburn, and Bowen). Many hours have been put in on these game plans...Wes is a great teacher and rebounder in teaching screens. I will call these guys to get details and pick their minds. Coach Poppovich played at the Air Force Academy and I spent a lot of time talking to coach just following him around. The way he approaches the game, there are so many things you can draw upon and use. To talk in the home of recruits, who else can do that? It's an edge in a positive for me when I go into homes.

Q: How confident are you that all five will be here?

Q:How does Wake Forest rank in terms of difficult jobs in your career?

A: Every job is difficult. I embrace that challenge and we are in the ACC, which is very difficult. Great coaches, great programs, great players. I embrace those challenges and that's why I took the Colorado job that had very little tradition and facilities and they are in a great place now. We took Alex Burks, who is not a 4-5 star guy, and made him the Big !2 FOY over multiple 4-5 star guys. There are a lot of young players in this program and I am looking forward to working with them.

Q: What game are you looking forward to the most?

A: The first game, because that's the one we play to start the year. You make a mistake you play through it. The next game is always the most important. Every game let's get better in a positive way. Just like a snowball at the top of the mountain getting bigger and bigger as it picks up steam.

Q: WIll Walt Corbean be promoted?

A: I just got here and am trying to get my feet on the ground. Walt isn't going anywhere and I need to assess the jobs here and I haven't even said hello to some people. Once we get through with this, I have to get to the recruits and the players that are leaving. That's another thing I need to do today. They need to know that...my door is always open. We play for the name on front of the chest, not the one on the back. We play for pride and tradition and through time will reach out to everybody.

Q: There are three opponents on the schedule that are very important to fans here...

A: When we played Navy at AFA, that was a big game. When we played Nebraska or Kansas at Colorado, those were big games. These UNC, Duke, and State games will come in due time and we will take it as they come. They are all different games obviously and we embrace that challenge to try to rise to the challenge.

Q: How would you describe the difference in talents between the NBA and college?

A: It is not that different. It is about bringing out the best in the players. If you go look at any great college or NBA coach, these people always have success because of the relationship they have with their players, the way they motivate, and the way they mold them together to move forward in a team way. You have more skilled players in the NBA, but to me it comes down to the relationship you have with your player. There is always an ongoing tension with players, if you push too lightly they don't get better, if you push too hard it fractures. You have to walk that fine line and get the best out of them. In college I enjoy the mentoring and helping them off the court as well in creating opportunities for those.