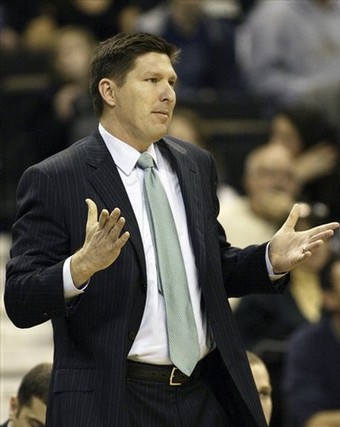 According to Clemson's official website, Brad Brownell will become the new head coach at Clemson. Brownell is 167-85 in his coaching career, including stints at UNC-W and Wright State.

After Oliver Purnell made a move to Depaul that surprised many, Clemson was left with a vacancy in their head coaching position. Brad Brownell will attempt to fill that position as he will be the next Clemson head coach.

Brad Brownell was reportedly on the short list for the coaching vacancy at Wake Forest. There were also rumors that he may have been interviewed by athletic director Ron Wellman, but that has not been confirmed nor denied.

Brad Brownell has an impressive list of accolades in his coaching career. He won CAA Coach of the Year in 2003 and 2006 at UNC-W, and Horizon League Coach of the Year in 2008. He also won two conference championships in the CAA and one in the Horizon League. Brownell has been to the NCAA Tournament three times, but has never advanced to the second round. It did however take a miracle shot by Maryland in 2003 to avoid the upset at the hands of the Seahawks.

It will be very interesting to see how Brownell can do in the ACC. A lot of Wake Forest fans thought that Brownell would be a good hiring for the Demon Deacons. He is a young and upcoming head coach at 42 years old and has experienced a lot of success in conference tournaments.

Brownell has never had a losing record in 8 seasons of coaching. If Brownell can recruit at a high level in the ACC, I have no doubt that he will succeed at Clemson. It should be a good hiring by the Tigers, and it will be very interesting to see how the careers of Bzdelik and Brownell play out from here.

If Brownell suceeds at Clemson while Bzdelik does not experience the same type of results at Wake Forest, it will always be a "what could have been" situation for Wake Forest fans.