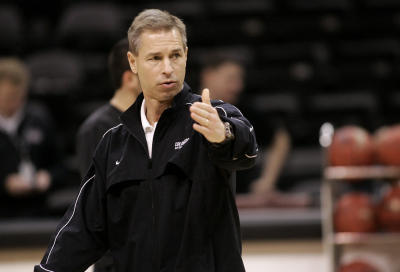 In what many would call a bizarre turn of events, "sources" have indicated that Jeff Bzdelik is the leading candidate to become the next Wake Forest basketball coach.

Jeff Bzdelik is the current head coach at Colorado University where he has accumulated a 32-57 (10-35 in the Big 12) record. Bzdelik has been in the coaching business since 1978 when he was an assistant at Davidson. He has held head coaching stints in the college and the NBA. Bzdelik coached the Denver Nuggets from 2002-2004 before being fired in the early stages of the third season.

Before Colorado, Bzdelik coached at Air Force, where he led them to a 50-16 record and an NCAA tournament berth.

Click through to read a profile of Jeff Bzdelik

Although the name Jeff Bzdelik may be out of the blue to many Wake Forest fans and certainly odd since he is the head coach of Colorado right now, he actually has a few ties to North Carolina and Wake Forest. Ron Wellman and Bzdelik have known each other since Wellman's days at Northwestern and have apparently maintained contact over the years. Bzdelik's daughter attends Wake Forest University, and Dino Gaudio talked to Bzdelik several times over the course of his tenure at Wake Forest.

What makes this rumor bizarre is the lack of qualities that Bzdelik has that Wellman is (supposedly) looking for in the next head coach of Wake Forest.

In the press conference Ron Wellman held on Wednesday to announce that Wake Forest would not retain Dino Gaudio, the lack of postseason success and lack of improvement over the course of the season is what ultimately did Dino in. If one is to take Wellman at face value, the next coach should certainly be proven in not only their conference tournament, but also the NCAA tournament as well.

In Bzdelik's only trip to the NCAA tournament in 2007, Bzdelik lost to Illinois in the first round with Air Force. While he did manage to compile a gaudy 50-16 record over two years at Air Force, it was done using the players recruited by previous head coaches Chris Mooney and Joe Scott.

If Ron Wellman was judging Dino Gaudio primarily on what he does in February and March, he should hold the potential coaching candidates to the same standards. Not only has Bzdelik not even come close to the success that Gaudio experienced in the regular season at Wake Forest, he has only made one NCAA tournament and lost that game.

While Jeff Bzdelik is a very good "X's and O's" coach on offense, there is a serious question as to whether he can win at the level that Ron Wellman and Wake Forest fans expect him to. He is 57 years old, which is a potential concern not only health-wise, but also from a recruiting standpoint. Why would recruits want to play for an aging coach when they could go play for a young gun such as Brad Stevens?

Another concern is whether or not Bzdelik's scheme (offensively and defensively) will fit in to the players that Wake Forest has. This is a lesser concern because Wellman has said he does not mind losing a few years if that is what it takes to get Wake Forest headed in the right direction. Bzdelik plays a 2-3 matchup zone on defense and a "Princeton-oriented" offensive attack. Both of these philosophies are completely different than what Wake Forest has used in the past, which could potentially lead to a long adjustment period.

It is also a shaky business decision at best too for several reasons. Wake Forest had to buyout Gaudio's contract, which is estimated at anywhere from $500K to $1 million dollars for the remaining years. Also, a clause in Colorado's contract with Bzdelik just got enacted that forces any school to pay $500k to Colorado if a new practice facility is underway, which Bzdelik requested. Construction for this conveniently got underway less than a month ago for the new facility. So now before the contract for Bzdelik is even discussed, Wake Forest is anywhere from $1 million-$1.5 million dollars down already. It is hard to believe that the donors and boosters who supposedly were putting pressure on Wellman to fire Gaudio would put up this type of money to see somebody who is, at best, slightly better than Gaudio, take over the same coaching position. This is just not a smart financial decision no matter how one looks at it.

While Bzdelik certainly has a good pedigree of coaching stints (aside from this last stop at Colorado), it is difficult to grasp the idea that Ron Wellman fired Dino Gaudio, who had a 61-31 overall record, to hire a coach who is 32-57 at his current job. Fans would likely give Bzdelik a fair shake to show his coaching skills, but they are sure to be skeptical of a hire that is, for lack of a better word, boring.