The Chief has Departed

Share All sharing options for: The Chief has Departed 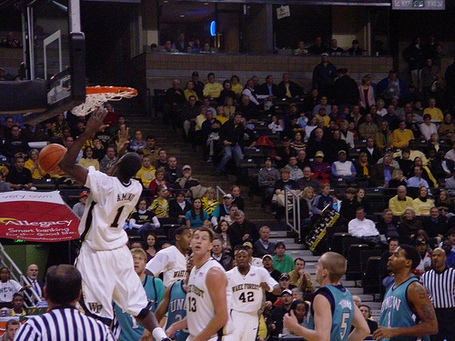 On March 31st, super sophomore Al-Farouq Aminu declared for the NBA Draft. This announcement surprised very few. I will tell you why Aminu is ready for the league, and why we should be thankful for his sophomore season at Wake Forest.

Athletically speaking, Aminu is a man among boys. He is 6' 8", 210 pounds, with a 7' 4" wingspan. He thrives in a fast-paced offense where he can score in transition or in the secondary break. In the pros, his size will allow him to create mismatches. His length will frustrate small forwards who try to guard him, and his quickness will frustrate power forwards who try to guard him.

And at 19, his body still has more time to develop. His frame will allow him to add an additional 15-20 pounds of muscle. This added muscle will further allow him to create mismatches. His phenomenal athletic ability also allows him to grab rebounds with ease. This past season he grabbed 10.7 rebounds per game, which was first in the ACC by 1.5 rebounds per game. That's simply outstanding.

Aminu also projects to be a very good defender on the next level. His length will allow him to get into passing lanes and steal entry passes. It will also allow him to both block and alter shots in the lane. This year, Aminu was the anchor to a fantastic Wake Forest defense. He was the primary reason why the defense was so phenomenal. His rebounding ability also allowed Wake's transition offense to be so effective. He did a fantastic job of grabbing rebounds, giving point guard Ish Smith outlet passes, and then running to floor to finish the break.

He is the primary reason the Demon Deacons finished 5th in the ACC and made the NCAA Tournament. In their biggest game of the year against Texas, a team that at one point during the season was 17-0 and the #1 team in the country, he dominated a massive front line by scoring 20 points and grabbing 15 rebounds.

Al-Farouq Aminu is also to be commended for the advances in his offensive game. He worked very hard in the offseason and it showed during the season. His low post game was vastly improved as was the form on his jump shot. He increased his 3 point FG% by 12%. He also improved his free throw percentage to 70%.

As this season progressed, he also showed improved shot selection. Instead of playing on the perimeter, he would play in the post. This allowed him to shoot much higher percentage shots. Too often players go away from their strengths, but not Farouq. He exerted his will in the post and either scored or got to the foul line.

In the NBA, character matters. Al-Farouq Aminu has demonstrated outstanding character during his time at Wake Forest University. He started displaying this character before he even stepped foot on campus. In the summer of 2007, then Wake Forest head basketball coach Skip Prosser tragically passed away. Aminu kept his commitment to Wake Forest, which is certainly a testament to his character. He was projected to be a lottery pick in the 2009 NBA Draft, but he decided to return to school for one more year to improve his basketball game, move closer towards earning a degree, and bond with his teammates.

His commitment to improving his game will separate him from others. He has a desire to be great and a work ethic to match it. So often players don't reach their potential because of lack of work ethic or character issues, but Aminu doesn't have those problems. He has what it takes to be successful in the league. Many players would have jumped on the opportunity to go to the NBA after one season, but Farouq showed the maturity to wait for an additional year. It's not easy to turn down a salary of over $1 or $2 million per year. He could have been living in a mansion, but he chose to live in the dorms for one more year. This is why I was so thankful he chose to come back and play one final season for the Deacs.

I believe that Al-Farouq Aminu can be a slightly less athletic version of Josh Smith on the next level. He has the physical tools and intangibles necessary to get him to that level. He will never be the best player on a championship caliber team, but he certainly has the potential to be a key player on a championship caliber team. His defense and rebounding will allow him to stand out at the next level. If he develops a consistent jumper, watch out, because it will be scary.

I wish Farouq the best of luck in the future, and I congratulate Dino Gaudio for being an excellent resource for his player, and looking out for his player's best interests. That speaks volumes about Gaudio's character. It has been a pleasure watching Farouq in a Deacons uniform over the past two seasons, and it will be a pleasure to watch him in the NBA.