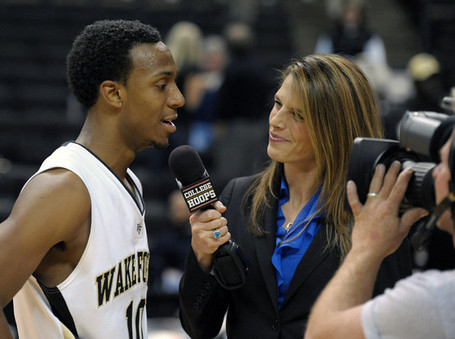 The ACC/SEC Blog suggested we do a Basketball Roundtable after the close of the ACC regular season. You can find Clark's answers on his site and here are my answers to his questions. Other ACC bloggers participated and there'll be a roundup on the ACC/SEC Blog soon.

1. The national perception is that the ACC is down this year. Duke has been in the top 10 all year, but no one else has come close. Does the conference deserve this reputation? Why or Why not?

I think the national perception is inherently tied to North Carolina. It's just the truth. When Carolina's down, the conference is down, or something like that. The fact of the matter is that although outside of Duke there are no "dominant" teams, the conference as a whole is one of the top three in the country this year. For me it goes: Big East, Big 12, ACC, Big Ten, SEC.

Sure, Ohio State, Purdue and Michigan State are in the Big Ten, but outside of those three teams, with the exception of Wisconsin, the rest of the conference is weak. Yeah, the SEC has Kentucky, Tennessee and Vanderbilt, but not much else. The fact of the matter is that the ACC will have a good amount of teams in the tournament like they always do. Whether they will play up to their seeding is another story.

2. Does Duke have what it takes to make a run to a National Championship? Why or Why not?

They actually might this year and would win it all for sure...if they played at Cameron. The problem is that Duke hasn't played very well on neutral and road courts. Can Coach K get them to overcome that for a six game stretch? I'm not sure. It certainly hasn't happened lately. But I think what separates this Duke team from the other teams the past few years has been its post play. The Blue Devils always have good guards, but this year, with the emergence of the Plumlees and the surprising play of Zoubek, Duke has added an element they haven't really had since Shelden Williams or as far back as Carlos Boozer.

3. We know Duke and Maryland are in, but who else gets in from the ACC? Will we see any surprises on Selection Sunday?

We won't have any surprises unless GT gets left out in the cold. It's pretty cut and dry right now: Duke, Maryland, FSU, Wake, Clemson, VT.

4. What is the biggest surprise of the season (good or bad)?

The two biggest surprises have been, obviously, just how much UNC has tanked, but also how well Maryland has played. I knew they were a tournament team, but I honestly thought their pre-season ranking wasn't justified. And after some sloppy play early on in the season, I thought I was right. And then the Terps started destroying teams and they haven't really looked back since. Greivis Vasquez has become a lot more consistent, Eric Hayes has embraced his role, Landon Milbourne comes to play every night and Jordan Williams has really improved as the season has gone on.

5. A couple of teams have had disappointing seasons. Whose seat is the hottest?

Paul Hewitt. This is about as easy as it gets. Hewitt has a ton of talent and he just doesn't know what to do with it. This team should be a Sweet Sixteen team and they might not even make the tournament.

6. Who is your player and coach of the year? Why?

Greivis Vasquez and Gary Williams from Maryland. Williams has done an incredible job this year getting his team to peak at the right time and a lot of it has come from just how well Vasquez has been playing. I know Scheyer has been good, but Vasquez means so much more to his team.