Share All sharing options for: Deacs Complete Sweep of Muskeeters 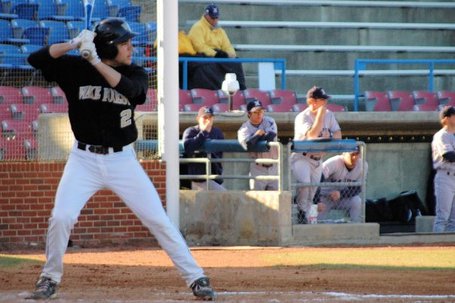 Led by Shane Kroker's 7th inning towering shot over the left field wall to put the Deacs ahead for good, Wake Forest completed the sweep of Xavier in an exciting 12-10 slugfest at Wake Forest Baseball Park on Sunday afternoon. Freshman Niko Spezial recorded his first collegiate win in two innings of relief. Xavier's Brian Muransky took the loss in over two innings of work and Wake Forest's Joel Ernest earned the three out save, his second of the year.

The Diamond Deacs returned to action on Sunday with a thrilling win 12-10 win over Xavier. Xavier got on the board first against starter Austin Stadler who walked 3 in the first inning and allowed two runs off of two hits. Xavier had a chance to add on to their score in each of the first three innings, but Stadler was able to end each of the innings with a double play.

The Deacs struck right back in the bottom of the second, netting 4 runs and taking advantage of a poor outing from Xavier starter Jon Richard, which featured 6 walks in 3.1 innings pitched. First baseman Matt Conway put the Deacs on the board first when he hit a double to left field, scoring Mac Williamson from second, who was also walked by Richard. Following Conway, Shane Kroker grounded out, but Carlos Lopez scored from third. He was also walked by Richard and had advanced to third on the previous double by Conway.

The inning continued with back-to-back RBI scoring doubles by Bentley Heyman and Pat Blair to nearly identical spots in left field. The Deacs poked across one more run in both the 3rd and 4th innings to jump out to a 6-2 lead through four.

The top of the 5th saw Xavier's bats heat up and plate seven runs to push the Musketeers out to a 9-6 lead. They added one more run in the top of the 6th to stretch the lead out to 10-6.

But the Deacs responded in the bottom of the 6th with a lead-off double by Blair, followed by a two-run shot from Ryan Semeniuk to stretch his season hitting streak to a dozen. Following a Brooks walk and two outs by Murray and Williamson, Lopez hit a double down the right field line which appeared to be foul. Xavier's manager Scott Googins came out to argue the call and was ejected by home plate umpire Brad Newton. Matt Conway kept the run going when he was hit by a pitch and then Kroker came up huge with his only hit of the day, a towering shot over the left-field wall.

"I was struggling and couldn't buy a hit at the plate," Kroker said, "but he (Brian Muransky) had been throwing first pitch fastballs so I waited on it, took a good swing at it, and it felt good."

Kroker's home run to put the Deacs up 12-10 was all they would need as the bullpen came through allowing only 4 hits and no runs over the last 4 innings of the game.

With the win, the Deacs get back to .500 on the year at 6-6, while Xavier drops to 1-9 on the year. The Deacs finished up their 12 game homestand and are set to hit the road for the first time this year.

Manager Tom Walter, in his first season with the Deacs, is happy with the team's progression so far this season.

"Our defense definitely improved this weekend and we got good pitching on Friday and Saturday from Dimock and Cooney, then Shane (Kroker) came up big today with his homer". Walter went on to say of the tough road trip ahead,  "I'm very confident and very pleased with the pitching staff. Niko (Spezial) was great out of the bullpen today and was able to record his first collegiate win."

The Deacs take on Coastal Carolina on Tuesday, a team they lost to 2-0 earlier in the year, and then Wilmington on Wednesday. Following their trips to the coast, the Deacs head south to Atlanta to take on nationally-ranked Georgia Tech to kick off the ACC season.

Congrats to the Diamond Deacs on a great win this season and keep up the great work. Go Deacs!