Thank You Seniors - A Fan's Testimony

Share All sharing options for: Thank You Seniors - A Fan's Testimony 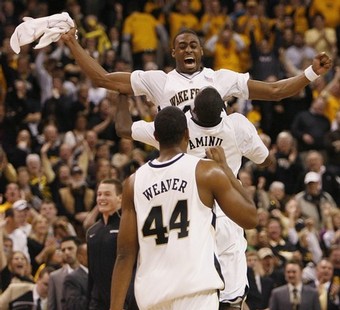 This is my attempt to capture lightning in a bottle and describe how much these seniors have meant to me as they get set to play their final game in the Joel tonight against Clemson. Hopefully the majority of you will be able to relate and it will conjure up memories that have slipped my mind, or that you have had while watching them perform.

These past four years for you guys have been the greatest times of your life. Not only have you had a chance to attend an elite institution in Wake Forest University, but you have had a chance to play basketball on the highest collegiate level possible while with your best friends. These years have been more trying than you could ever have imagined before you even set foot on the hallowed grounds of Wake. They have held more ups and downs than many people will suffer in a lifetime on and off the basketball court.

You all lost not just a coach, but a mentor and a friend with the passing of Skip Prosser on July 28th, 2007. This was probably the most difficult time in most of your lives, but the outpouring of support from fans, coaches, and other teams alike brought you closer together than you thought you would ever be. The resiliency that was displayed during that time was nothing short of phenomenal. The heart and determination that was shown on the basketball court during the next season was miraculous and yielded some of my favorite memories as a lifelong Wake Forest fan.

To Ish: Remember that time you hit a game winner not once, but twice against Virginia Tech and Miami? The Virginia Tech game is one that I will never forget. It was a microcosm of the team as a whole, recovering from 8 points down in the final 1:30 seconds before the perfect shot was released to send the team and crowd into a frenzy. It was after that game that you all knew that Skip was not only up there but looking down and chuckling to himself. You have been through many harsh times and have matured on what some would view the harshest of stages. I have seen you develop from a scrawny point guard from Concord, NC to an elite ACC point guard who carries a team on his shoulders without any trace of fear or doubt. It is because of this that you are one of my favorite Deacs and I will always hold a special place in my heart for what you have given to this University for four years.

This pass demonstrates exactly what you have meant to Wake Forest. Always part of the action, but never afraid to give it up if it is for the better of the team.

To LD: You sir, hold my #1 highlight reel spot in my mind for now and likely always. It was during a game your freshman year against Georgia Tech on what was seemingly a typical loose ball scramble that you forever changed many people's images of you. Harvey Hale somehow came up with a loose ball and appeared to throw a ball that would wind up in the 5th row of the Screamin' Demons, or perhaps even the band. Out of nowhere you swept in and grabbed the ball from behind you with one hand and managed to contort your body so that you could slam it down in one fluid motion. Anybody that ever wants to play college basketball should have to watch a "How To" tape with you in it to properly demonstrate the heart and hustle (not to mention emotion) that the game should be played with.

To Chas: Chas, AHHH Chas, what can we say about you. You may be one of the more polarizing players to ever put on the Old Gold and Black. It took me a couple of years to come around on you. I found you initially very frustrating on the court. It seemed like you did were always playing not very intelligently and looking for trouble. It was only then did I realize that you may play with more heart than anybody else on the team. Many people may think I am crazy when I say this but hear me out. We all know that you are not the most athletically inclined player on the team. You do however, possess the want and hustle that every player should play with. If everybody on Wake Forest dove for loose balls the way that you do, and got under the skin of our opponents the way you do, we would win every game in a blow out (or the other team would have to forfeit because they wouldn't be able to field a full team). You have made tremendous strides as a basketball player and have gone from somebody I thought would ride the bench for four years to a starter on a two time tournament team during your time at Wake Forest.

This video is a perfect representation for you Chas. Many of us never thought you were going to make it, but you found a way to do it and got the job done effectively. It may not be the flashiest of moves, but it still counts the same as an earth-shattering dunk.

To D-Weave: One of the more underrated seniors that we have been blessed to have. You have sacrificed tremendously for the team. Although you may not have started the games or logged the minutes that the other seniors have, you are no less valuable to the team than they have been. If anything you may be a little more valuable. You have never once complained about a lack of playing time, and have made the most of all your opportunities. The strides in your game have been phenomenal, and your rebounding, hustle and defense have been staples to the team in the past. From redshirting to getting hammered without fouls called (Jamie Luckie fail) to hitting the occasional three, you always do what is needed and are the heart and soul of what we all strive to be at Wake Forest.

When you all leave the court in Joel tomorrow night for the final time, win or lose, remember that you four are the heart and soul of Wake Forest University. Personally, you are my favorite class of all-time at Wake Forest. Although you may not be the best athletes that Wake Forest has ever seen, you all maximized your potential and attempted to play with 100% every night. As a fan, that is the best that I could ever hope for. For all that you have accomplished at Wake Forest and all the basketball games that you have won, I will remember you for the smiles, the heart, the emotions, the love and the passion that you played the game with, and that will stay with me long after the results of the game stay with me.

Thank you all Class of 2010, and it's not over yet. Let's take care of business tomorrow night, make a run in the ACC Tournament and give it your all. You never know what might happen in March. Thank you seniors!!!