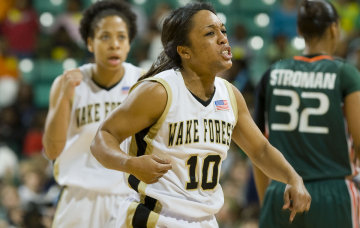 Day one of the ACC Women's Tournament featured a slate of fantastic games. Beginning with a thrilling come from behind victory for Wake Forest over Miami and ending with a back and forth battle between Clemson and NC State, it was about all you could ask for in excitement. Wake Forest, Boston College, Maryland and NC State all got much needed wins to keep their tournament hopes alive, while four teams saw their chances at the 2010 ACC title come to an end.

The Lady Deacs kept their slim tournament hopes alive with an exciting 66-65 win over last seeded Miami. The Deacons trailed for most of the first half and found themselves down by 11 just three minutes into the second half on the heels of a quick 8-0 run from Miami to start the half. Led by freshman Sandra Garcia and capped off by a three point play with a minute left in overtime by Brittany Waters, the Deacs lived to play another day despite what might be considered at best questionable officiating throughout the game. It appeared that star Shenise Johnson of Miami committed her fifth foul near the end of regulation, but she was kept in the game when she appealed successfully to officials that she was not involved on the play. Replays revealed that the foul should in fact have been given to Johnson. Miami went on to come back in the waning seconds to tie the game and send it into overtime tied at 59. The Deacs will take the court again on Friday at 11 A.M. against 4th seeded Georgia Tech who earned their first ever bye in the ACCT this year.

The 8th seeded Terrapins of Maryland got a hard fought win against the Tar Heels and added a critical win to their resume in a push to make the NCAA tournament field. Behind a double double from Lynetta Kizer who had 22 points and 10 rebounds, the Terrapins fended off a scrappy Tar Heel team and held on for a 83-77 victory. Maryland jumped out to a quick 21-6 lead and led the game 41-31, but the Heels cut the lead to 61-57 with just over 5 minutes remaining before the Terps were able to stretch out the lead and ice the game away at the free throw line. The Tar Heels were led by Cetera DeGraffenreid who had 6 steals to go along with 23 points. UNC now waits at home to see where they will be seeded in the NCAA field but should be safely in. Maryland plays again at 3 P.M. Friday against top seeded Duke.

The nightcap began with Boston College holding Virginia Tech's offense to only 49 points on 31% shooting from the field. The Eagles improved their record to 16-14 and got a much needed win to keep their tournament hopes alive. Boston College sits as one of the "First Four Out" on Charlie Creme's ESPN Bracketology and a loss against the Hokies would certainly have sent the Eagles to the NIT. BC was led by 18 points and 8 rebounds from Stefanie Murphy while the Hokies were guided by Nikki Davis and Utahya Drye who had a combined 18 points and 12 rebounds. With the loss the Hokies fell to 15-15 on the season. The Eagles will face second seeded Florida State at 6 P.M. on Friday. With a win the Eagles would almost certainly find themselves in the tournament come Selection Sunday.

In the final game of the night the NC State Wolfpack turned a 24-19 lead over the Clemson Tigers into a 59-54 victory while holding a 44-27 advantage on the boards. Bonae Holston provided 22 points and 9 rebounds while Nikitta Gartrell added 10 and 8 for the Wolfpack. Clemson's season came to a disappointing end as they were unable to get anything going all night, but briefly came back in the second half to take a lead as late as the 6 minute mark at 44-42. The Wolfpack survive to face third seeded Virginia at 8 P.M. on Friday at the Greensboro Colisem

The Deacs will return to the Coliseum Friday morning at 11 A.M. to take on the Yellow Jackets of Georgia Tech. Georgia Tech is coming off one of their better seasons in program history with a 22-8 record in the regular season. Win or lose the Jackets will be playing in the NCAA tournament and are currently projected as a 7 seed. The Deacons need a win against Tech to add to their resume for the selection committee. The winner of this game will play the winner of the Duke-Maryland game.

The Duke Blue Devils will play their first game of the 2010 tournament when they take on the Terrapins at 3 P.M. The Blue Devils are coming off of a tough loss to rival North Carolina in the season finale, but are still ranked 8th in the AP Poll. With a win over Duke, Maryland would certainly find their names being called next Sunday and would probably make it into the field with an impressive performance but it will certainly be a tough task for the young Terrapins. The winner will take on the winner of the Georgia Tech-Wake Forest game in the semifinals on Saturday.

The Eagles of Boston College are met with a tough task in trying to knock off 6th ranked Florida State Seminoles, who are arguably the best team in the conference this year. Florida State and Duke are on a collision course to meet in the tournament finals as they have set themselves apart as the best two teams in the ACC this year. The Eagles desperately need a big name on their resume for the tournament while Florida State is having one of their best seasons in program history. The winner takes on the winner of the NC State-Virginia game in the Saturday semifinals.

The Virginia Cavaliers won the honor of being the last team to take the court in this year's version of the tournament when they take on the Wolfpack at 8 P.M. on Friday night. The Cavaliers are ranked 19th in the country although they lost 2 of their last 3 games of the year (to FSU and Duke). With a win over Virginia, NC State would feel better about their chances of making the tournament while the Cavs are projected as a 5 seed in Bracketology. The winner takes on the winner of the Florida State-Boston College game on Saturday.

Thursday saw a heart-wrenching slate of games and Friday only promises to give basketball fans more exciting play. With four teams in need of a win to boost their tournament resume, the day should feature nothing short of a fantastic display of effort and athleticism. If at all possible get out over to Greensboro and lend the Deacs some support on Friday morning as they take on the Jackets!