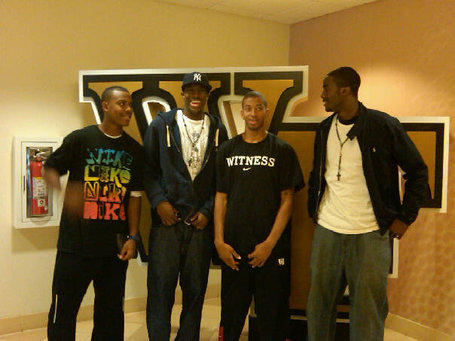 Melvin Tabb, ranked the 20th best PF and a four-star in the 2010 class according to Scout.com, as well as earning a 94 grade from ESPN.com, lost a heart-breaking game in the third round of the NCHSAA 4-A playoffs. But the Enloe senior had a terrific year, averaging 17 points, 10 rebounds and 4 assists. Blogger So Dear recently caught up with Tabb and talked about J.T. Terrell, how he can't wait to step foot on campus, and making time for some Call of Duty.

MRickman: I bet you can't wait to get to Wake.

MT: I'm counting down the hours, man. It's bad. I'm ready to get out, I think we have 64, 65 more days. It's bittersweet, it's very bittersweet though. But I'm ready for Wake Forest. I'm ready to be away from home and I'm welcoming the competition coming in as a freshman. I can't wait to get on the court and play with those guys fully all the time because I love competition. Being around those guys will bring out the best in me.

MRickman: Who do you model your game after?

MT: It's a tough question to answer. I don't really know. I guess I would model my game after...myself. There are players in the NBA that I love, Kevin Durant, Lebron James, Carmello Anthony. I love the bigger, stronger forwards that can handle the ball.

MRickman: What do you think of how J.T. Terrell has been playing lately?

MT: When JT gets in the zone, if he gets going early, it's going to be a long night. He's going to get a lot of shots. I remember over the summer, there was an event him and I played in. Jump ball, I tipped the ball to him and he took one or two dribbles down court and pulled up. I ran down court and said, ‘JT, what was that for?" and these are his exact words, "I had to get that miss out of my system." He really has short term memory when it comes to missing a shot. I don't think he's nervous about his first college game. He's ready.

MRickman: You been keeping up with the other guys in your class?

MT: I keep in contact with everybody when I can. I was texting Travis not too long ago. Me and JT have been cool since we were 12. I haven't talked to him a lot lately, but we're still close-I'll Facebook him or text him here and there. And I'll see him at the North Carolina-South Carolina All-Star Game.

MRickman: What did it feel like being named to that All-Star team?

MT: I feel like any game is an honor for somebody to come to you and want you to play because of your success.

MRickman: Talk a little bit about your game and where it's at right now.

MT: I know next year coming in-I'm going to be 6'8"-and thinner than most guys. I want to face up to the basket a little more, improving my ballhandling, so I can take the bigger guys. I have really improved my jumpshot and have knocked down a lot more jumpers than I did in previous years. I want to be able to face up to the basket and knock down the 15ft jump shot and even come off picks sometimes.

MRickman: I know the season didn't end the way you wanted, but how'd you think the season went on the whole?

MT: I was happy with my numbers this year. I probably chipped in 4 assists per game on top of my 17 and 10. It was a great season. We just came up short, but it happens. Now it's time to get some Call of Duty in. I'm getting pretty disgusting in it right now. I'm very competitive, though. I hate to lose.