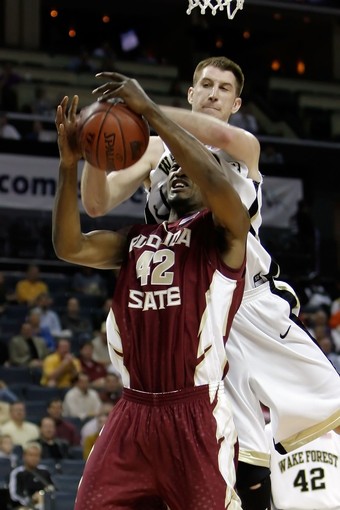 With two games left and a lot riding on the Deacs' matchup against the Seminoles, what better way to start the fun off than with another edition of the critically acclaimed Coffee Talk.

We're talking the 'Noles D, why the freshmen need to step up and the beast that is Solomon Alabi.

MRickman84: So here we are again and it's exciting because we have two new members joining coffee talk. The bad news is we're missing WakeJake today, but I'm here with RAJohnston and BJohnston, the newest additions to the BSD team. And we're talking FSU. Guys, what have you seen out of FSU this year?

BJohnston: First off thanks for having me, I'll try to help fill Jake's shoes today. Well FSU is a team which stresses defense and attempts to create offense by forcing missed shots and getting out in transition. They are not a high powered offensive team, but are ranked first in the nation in defensive efficiency by KenPom. It will be a struggle for the Deacs to break through on the offensive end and get some points.

RAJohnston: Florida State really doesn't have any bad losses so far this year. They started off the year very hot by winning the Old Spice Classic, and continuing their success into the conference. Their loss at home to NC State feels like forever ago, and they have been doing well as of late minus their loss to Clemson at home this past weekend. As BJohnston just commented, Leonard Hamilton has made Florida State into a defensive powerhouse so far this season by using their tremendous height advantage to generate blocks and steals.

MRickman84: And their defensive fingerprint is what really can keep them in any game. Offensively, Solomon Alabi makes this team go. Here's a case where a really strong freshman season rolled right into a better sophomore campaign by just improving on a player's strengths. Alabi is scoring more and averaging more rebounds (11.8 points, 6.4 reb per game), but he is also becoming a little bit more assertive on the offensive end at times. Plus, his 2.4 blocks per game don't hurt either.

RAJohnston: Tonight should be a great matchup between Alabi and our own Al-Farouq Aminu. This game will center around the defenses of both team, which will result in many blocked and missed shots. This makes rebounding very important because of second-chance points and transition points.

Wake Forest ranks second in the country (behind Radford) in rebounds a game at 42.8. Florida State meanwhile is at 42nd in the country at 38.6. This bodes well for the Demon Deacons and shows that it will be very important for Chas and Tony to help Aminu gather all the rebounds, especially at the offensive end to give ourselves two or three options to score on our possessions.

BJohnston: Farouq has really had a great season so far both scoring-wise and on the glass. He leads the six power conferences in rebounds per game with 11.0 and is the only ACC player to average a double double. Defense in this game certainly is a key as both Rickman and RA have stated. The Seminoles have only allowed 70 points or more in 7 games this year and are 1-6 in those 7 games (with the lone win a 76-72 victory over Auburn). What do you guys see as keys for the game tonight aside from breaking down the Seminole defense?

MRickman: You know, I hate to go all Groundhog Day on you, but I'm going to say the same thing I say every game. The freshmen. C.J. Harris has been in a serious slump lately. He was held scoreless the last two games, and is just 4 for his last 29 dating back to the Georgia Tech game. Harris seems a bit gunshy as teams have closed out on him, keeping him from getting open shots. And rather than head fake and drive the lane, he seems content to just pass up the shot. He also has had trouble finishing when he gets to the hoop and he is not getting the foul call down there.

We saw one heck of a performance out of Ari Stewart on Saturday and I can honestly say I expect a similar result again tonight. Stewart can shoot. He knows he can shoot. And it looks like Dino wants to ride that as much as he can. Do you see anything else being a huge factor when it comes to the Demon Deacon offense this evening?

RAJohnston: It may sound simple, but to win tonight Wake Forest is going to have to make shots at a higher rate than we have been making them. Ari and CJ are going to have to break out of their recent slump to open up the lane for Ish to drive and finish. I honestly think that Ari is going to pick right up where he left off against Carolina and continue to ride the hot hand from three. If the shots aren't falling then we are going to have to rebound extremely well, which is easier said than done with the height of the Seminoles.

I think recently Ish has been doing a little too much (see his 21 shots against UNC on Saturday), and needs to rely on his teammates to carry their weight to make things easier for him. I would love to us pound the ball down low into Chas and Tony, and get the ball to Farouq in a position where he can exploit the man who is guarding him and get some cheap fouls on drives.

On the flip side, other than defense, what does Florida State need to do tonight to come away with a victory on their home floor?

BJohnston: Simply stated, Florida State must be more productive and efficient on offense than they have up to this point in the season. The Seminoles are last in the ACC in offensive efficiency on KenPom. They are in the bottom half of the country in both 3PT% and FT% and only 22 teams turn the ball over more per 100 possessions than they do. Their key is to get the ball inside early and often to their big men which will open up passing lanes and open shots as the game progresses.

They will lose the game if they settle for chucking up threes all game because of Wake's perimeter defense and prowess on the boards. In a similar vein what can Wake do defensively to counter Florida State's offense and render it even more ineffective than normal?

RAJohnston: If we can get Chris Singleton to start chucking up shots early, as he is prone to do, Florida State may fall into a rut where they can't get the ball into the basket. He is shooting a shade above 31% from three pointers on the year, and is not scared to pull the trigger. We cannot allow Alabi to get the ball down low with only one man on him. He is very good at drawing fouls, especially against a foul prone player like Chas McFarland.

If we can generate a lot of steals and blocks inside we can lead the transition game and get some easy buckets. This is a game that fits right into Dino's likings because we can turn defense into offense quickly, and will need to with quite some effectiveness if we want to be in it at the end.

MRickman: Alright, so prediction time: What do you see happening tonight? The line is FSU -7.5, so Vegas is not too keen on the Deacs.

BJohnston: I think Wake wins 71-68. CJ steps it back up and we get double digits from both freshmen along with Aminu having a good game. FSU stays in it because of their inside presence and the momentum from the senior night festivities. Huge win for the Deacons which would leave us with a home win against Clemson from clinching the ACCT bye.

RAJohnston: KenPom tends to agree with Vegas (or Vegas takes KenPom quite seriously), and has Florida State winning 69-62. I agree with KenPom and actually remarked to WakeJake and BJohnston that I though Florida State would take the win 68-62. I agree that it will be very difficult to win on Senior Night. It will be very interesting to see if Ryan Reid can continue his streak of getting thrown out of games against us alive at 3. I think our offense is stalling too much to get anything going against the nation's top defense and that Florida State will keep a healthy 5-10 point lead most of the game.

MRickman: I'm pretty much with Riley here. I just don't see Wake being able to score enough to win this game unless they come out on fire. Clemson was down double digits but went nuts in the last few minutes of the first half and were able to match FSU punch for punch. If Wake has any shot, it'll be by getting some open looks and knocking them down. The lane is going to be a regular battle zone tonight. Wake will keep it close, but FSU has the edge, 63-60.