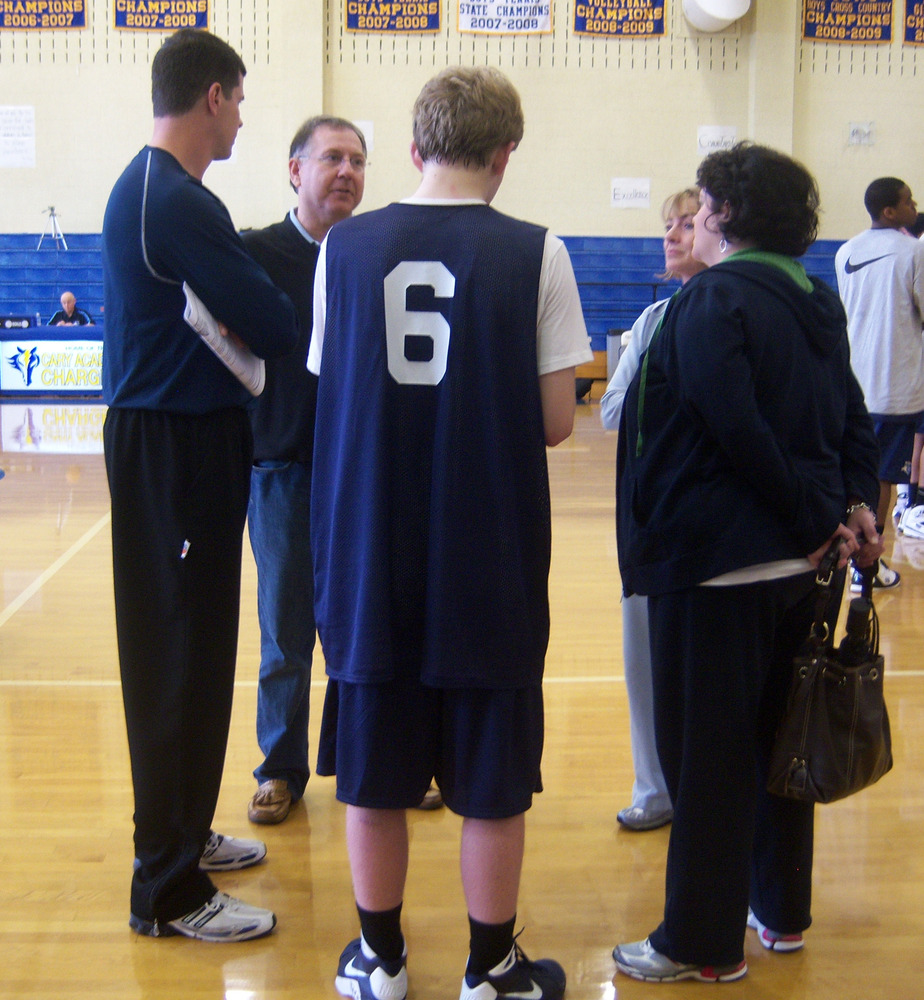 Blogger So Dear took a field trip to Cary, North Carolina on Saturday to check out some of the best recruits from 2011, 2012, and 2013 at Dave Telep's Carolina Challenge. The following article explores impact players from this year's Challenge.

Click through to read more on the Carolina Challenge

The sophomore point guard from Forsyth Country Day is a wizard with the basketball. His ball handling and passing abilities are outstanding.  He is an elite level passer with supreme court vision who always makes the correct read on the fast break. He was a highlight waiting to happen. One criticism of Lewis has been that he will not be as impressive when he plays against better competition. Yesterday, I watched him play against the best players in the state, and in my opinion, he was the best player on the court. Everything he did was so challenging, yet he made it look effortless.

He makes everyone around him better with his passing ability. In one game, he had 13 assists, which included the game winning assist with less than 5 seconds to go. He also has excellent touch when attacking the basket. There were many times yesterday when he attacked the basket and despite being defended by bigger players, he was able to finish because he has incredible touch with his left hand.

His weaknesses were his jump shot and his lack of speed on defense. Even though he lacks great outstanding lateral quickness, he was not getting beat off the dribble because he has excellent defensive fundamentals. His jump shot could improve, but that will come with time and repetition. I went in not knowing what to expect from Tyler Lewis and came away mesmerized. He was a pleasure to watch.

The junior forward from Quality Education Academy has tremendous upside. In addition to being very long and athletic, he has a lot of ability with the basketball for a player his size. He also appeared to be a very good teammate, as he was often seen encouraging his teammates to keep playing hard and congratulating them on good plays.

His biggest negative, however, is that despite all of his strengths, he would often go away from what he does well. He could score at will on the block, yet he would often be seen dribbling the ball in between his legs 17 feet away from the basket. Between the unnecessary turnovers and several bad passes, he was responsible for several turnovers. I realize that it was a showcase and that he wanted to display his skills, but if he would have stuck to his strengths he would have been much more impressive.

The junior guard from Vance High School was the best defensive player in the Carolina Challenge. He is a very tough guard who loves to defend. He did not back down from any player, including Tyler Lewis. He showed flashes of a good jumper in the second game. During that game, he hit several shots from beyond the arc and also demonstrated solid passing ability. His assist numbers were not as high because there were times when he would hit his teammates in stride, but they would fail to convert routine plays.

He is also a good penetrator, but needs to work on converting once he gets into the lane. The main thing that Marquis needs to work on is overall offensive consistency. He is good on offense, but no one offensive skill in particular stood out. I believe Marquis recognizes this, and will continue to work hard on his jumper shot and ball handling in order to get better.

The junior guard from Word of God Christian Academy demonstrated excellent athletic and jump shooting ability. I only saw him play one game, but in that game he was outstanding. He finished the game with 27 points and 8 assists and made his presence felt from the very beginning. Within the first 5 seconds he was on the court, he had a tip dunk. He made several long range shots and was on both the giving and receiving ends of many alley-oops.

He demonstrated the ability to be an excellent combo guard, but told me that he was working on making the transition from a combo guard to a point guard. I believe that he can make that transition because I saw him make several impressive passes yesterday, as well as display solid ball handling. His defense could use work, but he has all of the physical tools to be a very good defender. Bishop has a lot of talent and I believe that we will start to see his stock rising as he gets more exposure. He is definitely an ACC caliber player.

The younger brother of Miles and Mason, who both attend Duke, Plumlee was a good rebounder inside and had flashes of offensive ability, but was unable to get good looks against some of the bigger post presences. He matched up well with John Cannon, but had a rough time against Jackson Simmons who outworked him inside and was much more fundamentally sound. Not Plumlee's greatest performance and he could certainly look to improve his game.

Uchebo is an NC State commit who is listed at 7'0", but this height may be a little generous as Plumlee was definitely taller than he was and is listed at 6'11". Uchebo was great inside on the boards and showed some athleticism in getting out on the perimeter and knocking down a couple of jump shots. He is pretty built for his age and had a good game with his back to the basket down low. Uchebo will be a good player in the ACC.

A high-major guard with interest from a couple of ACC schools, Braxton has a good outside jumper and knocked down a few threes from the corner and elbow. He wasn't asked to carry the ball up court much but he had a good handle with the rock and is certainly a high-caliber player.

A South Carolina commit at the forward position, Gill performed well when matched up with Quincy Miller inside. Gill has a knack for being in the right place at the right time to grab the ball off the glass. Miller did a good job of denying Gill the ball on the offensive end, but when he got the ball with his back to the basket he knew how to get the ball in the basket. He is a strong player who will get the chance to play down in Columbia.

Gill is a rising sophomore from Ravenscroft in Raleigh and certainly made an impression at the Challenge. Despite the fact that he was relatively unheralded coming in, Gill had a good jump shot and was able to get the ball inside with ease. Look for Gill's name to start popping up on some recruiting services over the summer. He is a player.

Wilson had a pretty good performance when matched up with the best guards in North Carolina. He looked very strong in general and despite being only 6'2", he weighs 200 pounds. He had a few notable passes and has very good court vision. Wilson is a high mid-major prospect or low high-major prospect based on this weekend's performance.

Coger joined Gill from the class of 2013 and also made a strong impression. Listed at 6'8", 235, Coger was fantastic inside on the boards and was one of the stronger forwards out there. He was able to outmuscle his defenders and get to the basket pretty well from the blocks. Coger's stock will rise over the next year, and don't be surprised if he lands a host of good offers.

Hairston, a UNC commit for the class of 2011, had an okay performance at the Challenge. A lot of the time it looked like he was content to sit back and watch the rest of his team play, but when he had the ball he was very impressive. He threw down two massive dunks on a fast break and is a very strong player. He will look to get on the court as a freshman when he arrives in Chapel Hill in 2011.

Jackson was one of the hardest workers on Saturday at the Carolina Challenge. Although he was not the most athletically gifted player, he got the most out of his talents and was among the top 5-10 players there. Simmons averaged 15.7 points over the three games, and played the last game with a bandage over his head after he hit it on the backboard during a play. Despite playing on a team with Joseph Uchebo, he more than held his own on the rebounding end and had several offensive putbacks.

John Cannon is a low major, high mid-major prospect. He performed very well on the defensive end on Saturday and matched up favorably against Marshall Plumlee. He could be a bit more aggressive on the offensive end and attack the glass more. He had a good inside game with his back to the basket which was pretty impressive. He had a few blocks and a couple of very athletic plays inside.

Whisnant was one of the better shooters at the Carolina Challenge. He started off pretty hot in the morning game and finished with 16 points. He had 21 in the second game and knocked down a plethora of threes. Wake Forest has displayed interest in Whisnant and it was easy to see when you combine the athleticism he had and his shooting touch. He only had 4 points in the third game but still averaged 13.7 for the day.

Jacob Lawson was one of the most athletic players that we saw on Saturday. He has a tremendous amount of athletic talent and was a high flying dunker. He had one of the best blocks of the day on Marshall Plumlee in the second game when he denied him with one hand. In the game that we saw Lawson was not all that impressive but had a great dunk and several good rebounds, especially on the offensive end. Wake Forest has expressed interest and offered according to some sites. He is believed to be a heavy N.C. State lean though, and they have offered as well.

Tony Kimbro finished second in scoring average for the day at 18.3 ppg. Considering he was on the team with Bishop Daniels (the leading scorer), this was quite a feat. Kimbro had several dunks and layups in traffic and complimented that well with a good 3-point touch. Kimbro should get some high mid-major offers and some low major offers as well.

Kennedy Meeks was one of a handful of freshmen chosen to play in the Carolina Challenge. He is a little pudgy and raw but he has a fantastic midrange game for a player of his size. He plays for West Charlotte with J.T. Terrell and should be a force inside there for years to come. If he continues to grow and work on his game with his back to the basket, he could be a good fit in a major conference in the next 5 years. He also showed the ability to step back and hit a couple of threes in the third game.