Share All sharing options for: Wild Wild West: Breaking Down the West Region 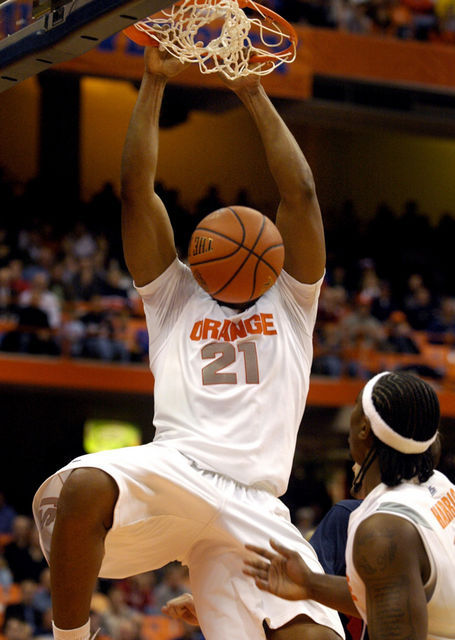 Led by top seeded Syracuse, the West region promises to produce some exciting matchups for viewers. With a great balance of mid-major's, top teams from power conferences, and several bubble teams, the West could turn out to be the most entertaining region of all.

Click through for matchups to look out for and a general overview of the West Region.

The West region features a host of fascinating first round games for fans. Of the eight first round matchups, five of the games could prove difficult for prognosticators to select. Aside from the top three seeds Syracuse, Kansas State, and Pittsburgh, all the other higher seeds need to be on upset alert come Thursday and Friday. Two popular picks for potential first round upsets will be played in the same pod back-to-back.

Both Butler and Vanderbilt are highly susceptible against UTEP and Murray State, respectively. UTEP, led by Derrick Caracter, comes into the game against Butler having won 16 of their last 17 games, the sole loss coming in the CUSA semifinals to Houston. Murray State also comes into the game on a hot streak having won 20 of their last 21 games, and boasting a 30-4 record.

Other notable first round matchups

Gonzaga vs. Florida State: An interesting matchup as Gonzaga's effective offense goes up against Florida State's matchup zones. Boasting the tallest team in the nation, the Seminole's athleticism will be tough for the 'Zags to handle. The winner gets to take on top seeded Syracuse in the second round.

BYU vs. Florida: Led by Jimmer Fredette, who can get a shot off with any space on the court, the Cougars look to hold serve against a Florida team many thought did not deserve to be in the tournament. Florida probably is seeded slightly too high with a 10 seed, but the committee did not do them any favors matching them up against a fundamentally sound BYU team who is probably seeded a little bit too low at a 7 seed.

Xavier vs. Minnesota: Tubby Smith's Golden Gophers were one of the final teams in the tournament and were given an 11 seed to face the 6th seeded Musketeers from Xavier. Xavier comes into the tournament having won 8 of their last 9 games and this game promises to be a high scoring affair as both teams host an effective offense.

Who will advance out of the region?

I really like Syracuse to get out of the West region and advance to the final four. Obviously a huge X-factor for Syracuse is big man Arinze Onuaku who injured his hamstring in the Orange's last game against Georgetown. If he is good to go for the second weekend, the Orange should be able to get to the Elite Eight with ease, where they match up very favorably with second seeded Kansas State.

Kansas State is a solid team led by Denis Clemente and Jacob Pullen. They own a top 20 offense and defense and came out second in the top rated Big 12, although they going went 0-3 against rival Kansas this year. Despite this, having watched Kansas State play several times I just do not feel that Kansas State is going to advance to the Final Four. To me, they are the second most vulnerable two seed behind Villanova, and must be on guard in the second round against BYU who could very easily knock the Wildcats off.