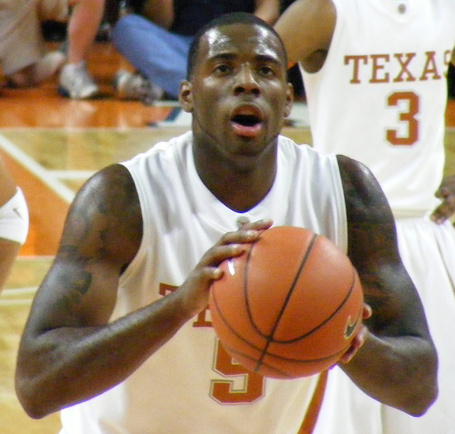 Leading up to the Texas-Wake Forest matchup on Thursday night, Blogger So Dear is taking several looks at some of Texas' marquee players. Today's Noon snapshot focuses on Longhorn star Damion James. The senior forward leads the Horns in points and rebounds and shoots a very impressive 40% from outside the arc.

Wake Forest has quite a large problem at hand with regards to their Thursday night game against Texas. Putting aside the more obvious problems of Texas' general athleticism, the fleet of Texas fans who will make the trip to New Orleans, and the fact that the Deacs stumble into the tournament having lost 5 of 6 games, they will also have to deal with one of the best and most underrated players in the nation in Damion James.

James is a senior forward from New Mexico, who had originally committed to Longhorn rival Oklahoma out of high school. However when Kelvin Sampson fled Oklahoma for Indiana, James reopened his commitment and ultimately ended up in Austin, Texas to play for coach Rick Barnes.

After averaging 8 points and 7 rebounds his freshman year, James upped his production his sophomore year when he averaged a double-double with 13 points and 10 rebounds a game while leading his team to an Elite Eight appearance. This prompted ESPN personality Dick Vitale to proclaim that James may be "one of the most athletic players in the nation."

Last year James' rebound numbers dropped a bit, but he still averaged 15 and 9 a game and recorded 15 and 10 against Duke in a second round loss in the NCAA tournament. Following his junior season, James entered his name in the NBA draft but ultimately decided to return to Texas for his senior season to see if he could elevate his draft status even higher.

The decision to return has been a great one this season as James is averaging 18 points and over 10 rebounds a game, while recording an astonishing 17 double-doubles, including four in a row in the middle of December. The first of these four games was against defending National Champion North Carolina, and James shined, scoring 25 points and 15 rebounds in a 103-90 Longhorn victory.

James' game is a mix of a strong interior presence and a good mid range and long range jumper. James has only attempted 87 threes on the year, but he is shooting over 40% from outside the arc. One of James' weaknesses over his first two seasons was his free throw shooting, but he has increased his percentage to 67% this season, a number which is not terrible for a slasher and sees the free throw line a lot.

James will be a huge problem for the Deacs to contain both on the scoreboard and on the glass. Al-Farouq Aminu will have to do a great job of boxing him out on both ends of the floor and keeping a hand in his face when James has the ball. If the Longhorns do in fact blow out Wake, look for James to be the catalyst for this 8th seeded Texas team.