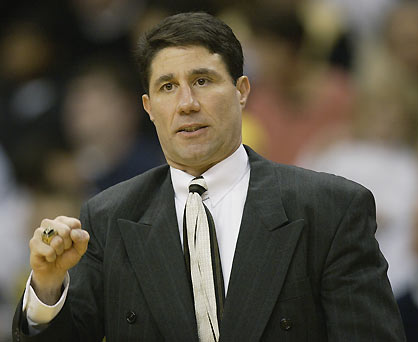 Dino Gaudio sat down with the media on Monday afternoon and fielded questions regarding Wake's upcoming matchup with Texas, the extent of Al-Farouq Aminu's hand injury and his thoughts on Wake's seeding in the NCAA tournament.

A: It’s going to be a big challenge for our kids with Pittman, James, and Johnson. These are strong, physical guys. Our guys will be surprised when they see how big they are. That front line is a big matchup and they are a very good rebounding team. We will have to do a good job getting in there, keeping them off the glass, and boxing out. The matchups of the frontlines is a huge deal in this game.

Q: Given how you came out flat the other night (against Miami), is there a concern about the mental aspect of Wake Forest and the upcoming game?

A: I think in these tournament games, teams are going to do what they do all year long in terms of X's and O's, what offenses you run and defenses you're playing, what you're planning to do strategically. There's no question the biggest part of these games are emotion and energy. That's what these games are about. You have to be enthused to play and it has to manifest itself out on the floor. From the shoulders up is more important than from the shoulders down.

Q: Are you doing anything differently to prepare this week than last week?

A: We will prepare the same way this week as we did last week. We've been doing the same thing last year since we were number one in the country and when we entered the rankings for the first time this year. Right now it's a confidence thing, and we're going to try to instill confidence in the players this week. This is a veteran team and it is their finale. They have to bring the energy and emotion. I always tell these kids, coach-driven teams only go so far. The player-driven teams are the ones that really take off.

Q: Al-Farouq Aminu sustained an injury in the ACC tournament game against Miami. What is his status?

A: He did have some pain and he got slapped in the hand during the game. He went to the line right after the play and shot an air ball because of the hand. We had it x-rayed yesterday, completely negative, which means he should be fine. I don't know of anyone who is 100% right now after 30 games, so that's just part of the game.

Q: Wake comes in having lost 5 of their last 6 games, how do you think that affects the team?

A: I thought we had a very emotional win on senior night against Clemson. I also thought the team really competed down in Tallahassee, where they lost a close, tough game. Then we played Clemson and played very well, a team who was hot and had won something like 5 of their last 6 games. We didn't play well in the ACC tournament, but for me as a coach I don't get caught up with all the internet drama and the newspaper drama and I tell my kids the same thing. You just have to play through tough losses. Three of our last four ACC games were on the road and, as we all know, it's tough to win on the road in the ACC. Right now every team is 0-0 and we just have to go from there.

Q: Were you happy with where the team was seeded?

A: I'll tell you, my first year as the coach here we went 17-13 (7-9 in the ACC) and we were a very young team. We started Teague and Johnson who were both freshmen, and then Ish and LD, who were sophomores. We didn't get an NCAA bid which we didn't deserve, neither did we get an NIT bid. I actually called a selection committee member to see what we could have done. And I was told you have to play a difficult non-league schedule. You have go to on the road. Now there are 73 BCS schools in America, and no BCS conference school played more road games than Wake Forest. None.

We had the 29th hardest SOS according to the RPI. We were 6-4 against top 50 teams, and 3-2 against top 30 teams. We tried to do everything we could to schedule a difficult schedule: to play at Gonzaga, to play Xavier, to play Richmond. You know, even our local games were tough, I don't know of anyone in the ACC who is going to play at UNCW, or at ECU. We learned that year what we needed to do and that's what we tried to do. I think that experience helped us get into the NCAA tournament this year. When we looked at all the boards up there (Bracketology, Lunardi, CBS), every one of them had us in the tournament, and I think it's because of who we played.

Q: Were you surprised that Virginia Tech did not get a bid?

A: Virginia Tech absolutely in my opinion should have been in the tournament, and that's another reason why they should expand the field. They didn't get left out because Wake did, because if I'm reading the brackets correctly I think there were four other seeds that were non-automatic that were lower than us that got in before Virginia Tech did. I absolutely believe that Virginia Tech should have been in the tourney. And if they get in it may be one of those stories where they could get in the final eight, or even the Final Four.