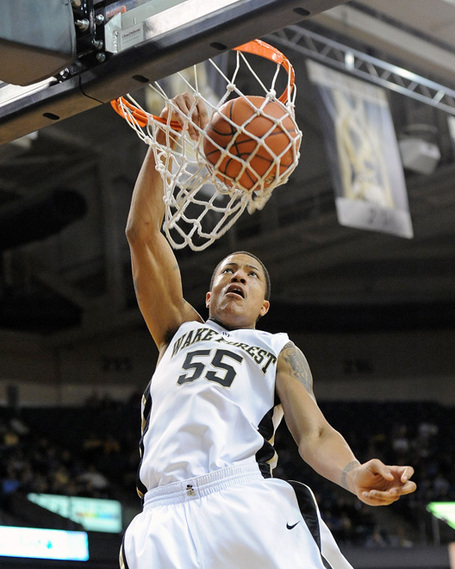 The anxious wait that many Wake fans endured, necessary or not, ended tonight, when the Demon Deacons were handed a 9 seed against the 8th seeded Texas Longhorns. The winner of the Deacs-Horns game will advance to take on the winner of the Kentucky-East Tennessee State game in the second round.

Five other teams will be dancing along with Wake from the ACC. Duke is slated as a 1 seed and the overall three team in the bracket. Maryland is in as a 4 seed, Clemson as a 7 seed, Florida State as a 9 seed, and Georgia Tech as a 10 seed. As one of the more notable national snubs, Virginia Tech found themselves on the outside looking in, but received a top seed in the NIT.

Wake Forest will get their tournament run started on Thursday at 9:35 p.m. in New Orleans against the Texas Longhorns. Following the disastrous loss to Miami on Thursday in the first round of the ACC tournament, the Deacs eagerly and nervously waited to see where and if they would be in the tournament. Wake's name was finally called when the East bracket rolled around on the Selection Show, and there was an audible sigh of relief from Wake fans everywhere.

Texas promises to give Wake Forest a challenge in the first round and have also limped into the post-season, dropping entirely out of the rankings after being the number one team in the country earlier in the year. If Wake can sneak past Texas they will have to face one of the top teams in the country in Kentucky, assuming they themselves can get past the pesky Atlantic Sun champ East Tennessee State.

The ACC in total received six bids, including a number one seed for ACC Champion Duke, who beat Georgia Tech on Sunday in the tournament final. Duke will face the winner of the play-in game which will be played on Tuesday night between Arkansas Pine-Bluff and Winthrop.

Maryland perhaps received a higher seeding than many people anticipated when they grabbed a four seed in the Midwest and will take on Houston in the first round. Following a quarterfinal exit from the ACC tournament against Georgia Tech, the regular season co-champion Terrapins were fortunate to avoid a 5-12 matchup in which many teams get upset.

Despite a loss in the first round to N.C. State in the ACC tournament, the Clemson Tigers were given the 7 seed in the East and a date with 10th seeded Missouri. This game will feature a defensive struggle as both teams rely upon a high intensity full court press for the majority of the game. It may very well be one of the more exciting matchups of the first round.

The Florida State Seminoles earned a 9 seed in the West bracket and will face West coast power Gonzaga in an 8-9 matchup on Friday night in Buffalo. The winner will most likely face Syracuse in the second round, who gets a first round game against Vermont. The Seminoles-Zags game will host an interesting matchup between a zone oriented Seminole defense and a high powered Gonzaga offense.

The last seed in the conference went out to Georgia Tech, fresh off their run to the ACC tournament final. The Yellow Jackets received a 10 seed and will take on Big 12 team Oklahoma State in the first round. The winner will advance to play the winner of the Ohio State-UCSB game in the second round.

While the ACC has fewer teams at the top of the brackets than normal, the slate of games provide the conference an opportunity to grab a few wins in the first round and leave a couple of teams with a very realistic shot at the Sweet 16 (mainly Duke).

Perhaps the most interesting fallout of the night was not the teams that made the tournament, but rather the fact that the Virginia Tech Hokies were left out. While Dick Vitale certainly did not agree with the decision (and chose to rail against Wake), it was more than likely the correct decision. It was evident that the selection committee valued and rewarded the entire body of work this season rather than recent hot play, and VPI simply did not have the resume to get into the tournament despite winning 23 games and going 10-6 in the conference. Virginia Tech will play in the NIT, which begins on Tuesday.

This week is considered by many to be the greatest spectacle in sports, so sit back, relax, and enjoy basketball debate followed by the Christmas of college basketball this weekend. And as always, go Deacs!