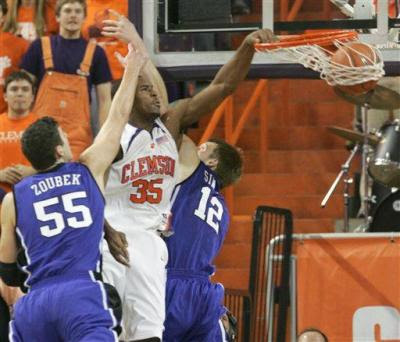 This preview is the last of a four part series leading up to the 57th edition of the ACC Tournament in Greensboro, North Carolina. In this part, we will examine the 9 PM matchup on Thursday of the #6 seeded Clemson Tigers and the #11 seeded North Carolina State Wolfpack. We will also take a look at how well the winner will matchup with the #3 seed Florida State Seminoles Friday at 9 PM.

The Tigers (21-9, 9-7) beat the Wolfpack (17-14, 5-11) in their lone match-up in Raleigh back in January. Both teams come into the tournament with a little bit of momentum with NC State having won 3 of their last 4 games and Clemson having taken 5 of their last 7. State struggled throughout the year but managed to notch some marquee wins with victories at home over Duke, Wake Forest and a road win over Florida State.

Clemson, on the other hand, has handled the bottom of the conference well but has struggled a bit with the upper echelon, having been swept by Duke, losing to Virginia Tech in their lone match-up and splitting with Maryland. The Tigers also ended up their regular season with a loss in Winston-Salem at the hands of Wake Forest.

Clemson will win if...

They are able to use their pressure defense to force turnovers and make State uncomfortable with the ball. Clemson comes into the game ranked 8th in turnover percentage and 5th in steal percentage according to KenPom. This is the result of a full court press and intense man to man pressure once the ball is put into the front court. This defense has been a staple of Oliver Purnell's defense while at Clemson and the Tigers go as far as their defense is able to create mismatches and, ultimately, turnovers. On the offensive end, Trevor Booker will need some help from his guards to alleviate some of the pressure that the Pack will be sure to stack inside to help slow the Clemson big man down.

They can take care of the ball on offense and Tracy Smith has a good game. Smith is an integral part of the State offense because if he can get the defense collapsing on him early, shooters like Scott Wood and Javier Gonzalez will get open looks they can knock down. State often struggles to get points for long periods of time and an effective Clemson press would exacerbate their offensive problems. To counter this, the Pack need to be effective at breaking the press and get easy looks inside for State to have a chance in this one.

Three of the four contributors felt that Clemson would take the final game of Thursday over the Wolfpack, but I feel that if State can break the press and keep scoring in the 50's or 60's they will have a chance. The Pack always plays well in the ACC tourney, while Clemson typically struggles. State only lost by 3 at home earlier in the year (73-70) and I look for them to spring the upset come Friday night.

The winner of the match-up will take on the 3rd seeded Florida State Seminoles. The Noles head into the tournament having won 5 of their last 6, but did not play a team in the top 4 of the conference in this span. The lone loss in this stertch was at home to Clemson, which was an abomination of basketball. With 6 minutes left in the first half FSU lead the Tigers 19-6, but somehow Clemson came back to win the game 53-50 in one of the ugliest conference games of the year.

If Clemson gets past the Wolfpack, a similar game may be in store. Florida State is one of, if not the best, defensive teams in the country. The Tigers nearly match the Noles' defensive prowess with their press and the game promises to be an offensive struggle.

If the Wolfpack pull the upset over Clemson, they will have nothing to lose going into Friday's game and will be excited for a chance to make it to the weekend. The Pack would have to get good production from Gonzalez at the point, who would need to have a perfect game reading the confusing zone defenses that Florida State switches in and out of.

The Seminoles finished the season 22-8, 10-6, but went 0-3 against Clemson (0-2) and NC State (0-1). Regardless of who advances to play against this 3rd seeded Florida State team, the crowd can expect a defensive battle with any outcome possible.