An open letter to the Demon Deacons

Share All sharing options for: An open letter to the Demon Deacons 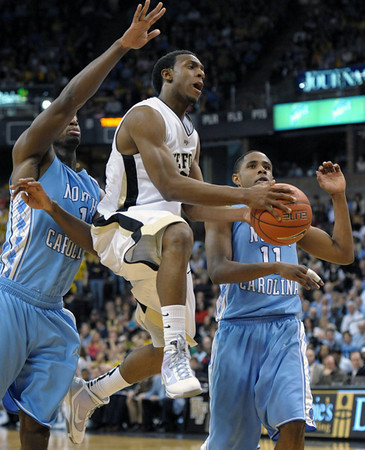 How's your Monday going? Yeah, mine's just ok too. I'm happy the weekend is over, aren't you? When I wasn't re-injuring my torn rotator cuff and getting rear-ended a mile from my house (guess that's true what they say about that, huh?), I did see the game Saturday. I'm not going to say much on that. It happened. You'll hear "you lost to the two worst teams in the ACC back-to-back, you've been exposed, you don't have any half-court offense," it's there, I've seen it. But, you know better than to dwell on that. it's over, it's done with. Onto the next one.

You guys don't need to be reminded of last year. Again, that happened already. It's more painful for you than it is for us fans, even though we fans seem to think we're just as important. We aren't.

So where do you go from here? You forget about it. I'm sure you've had a team meeting, come-to-Jesus, whatever you want to call it. The fact of the matter is that losing streaks happen, whether they happen in December, January or February. But as easy as it is to play Chicken Little on this, I still see a team that is 8-6 in conference and a good bet to make the NCAA Tournament. I'm sure that's what you guys see too.

There are two games left and a chance at 10 wins. Both games are good matchups, I'm sure you've seen that in film. You'll be hitting the gym hard, and the break is a decent one to reflect and recover. I wholeheartedly believe that these two games are winnable and that a bye in the ACC Tournament is still possible.

You guys have heart. You have fun playing together. You've fought some tough battles this year. But I'll be honest when I say I really enjoy watching you guys play. I've followed some teams in my life, both college and pro, that I just didn't like all that much. But I've talked with a lot of you and what sometimes gets lost in the wins and losses is just how passionate you all are about the Old Gold and Black.

No one wants to win more than you guys do, I can see it. When Ish almost had that steal right after that layup somehow rimmed out, that look was there. And the funny thing is, even when everything that could go wrong did on Saturday, you guys didn't quit. That means something.

So in this rambling, incoherent letter, I guess all I'm trying to say is keep fighting. There's still a long way to go before this thing is over and I'm not alone in saying that I believe you guys can still make a run at this thing.