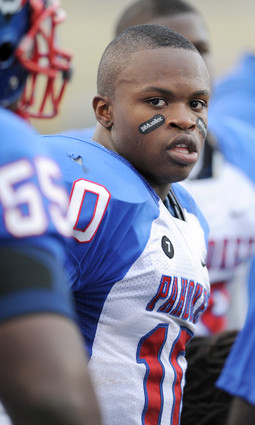 I've recently been brought into the ACC Roundtable, which is something I'm really excited about. And the way this all works out (if you haven't seen the Roundtable on any of the other SBN ACC blogs) is one of us poses a series of questions to the group and you can find answers posted on the various sites. This week's was very timely and offered up by From The Rumble Seat, and will focus on recruiting, both for Wake and the ACC in general.

Who is your prized prospect?

Wake Forest has a very balanced class this year, but I'd say there are two guys that I am keeping a close eye on. These are a pair of Pahokee products, Zach Allen and Merril Noel, that could be big-time players.
Allen had offers from Miami, West Virginia and Tennessee among others and has the body to fill out into a strong OLB. He is really quick and great in space and is one of those Jim Grobe-type players who will really get a lot out of his redshirt year, especially in the weight room.
If Noel was taller he could have gone anywhere in the country. At 5'7", he obviously is at a disadvantage against taller receivers, but what he lacks in height he makes up for in ability. He is great in coverage and hits really hard. The CB had offers from places like Florida and Georgia and had originally verballed to FSU, but switched, following teammate Allen.

How does your fanbase react to recruiting? Or do they just want to see results no matter the star count?

Our fanbase is very patient when it comes to recruiting. A lot of fans would admit that they aren't as gungho, especially considering that it will be a year before most of the incoming class will take the field due to Grobe's penchant for redshirting, but the fans trust the coaching staff in their ability to scout talent and find diamonds in the rough. You'll look through the list and see a bunch of three and two star guys and think that Wake couldn't land blue chips, but when you start to dig deeper into the offer sheets, the competition these guys played against, their passion for the game and their overall resumés, if you add in that extra year of preparation and work at the D-1 level, that's why you see many of these players like Aaron Curry, Alphonso Smith, Riley Skinner and Chip Vaughn excel.


Who is the next Calvin Johnson or Philip Rivers in this year's crop of ACC recruits?


Who do you all think have assembled the strongest recruiting class, taking into account not just rankings but the needs each one has filled?

I think Virginia Tech did the best job this year. The Hokies always seem to find a way to round out their class with solid, can't miss players rather than high risk, high reward guys. They do a good job of balancing speed, size, athleticism and discipline and I think that has shown itself on the field.

How do you all see ACC schools competing with schools in the SEC and Big 12 for recruits?

Everyone likes to talk about SEC speed, but if you look at recent history in the ACC, although you aren't seeing BCS wins, players from the conference have turned out to be studs in the NFL even though there are not as many Top 50 guys. The ACC needs to do a better job in bowl games, but they are tapping into the right states--NC, Virginia, Georgia, Florida, etc...---and have been seeing a lot of results out of players from that area.