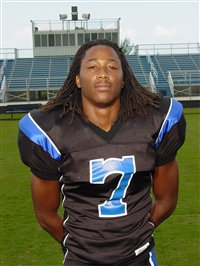 In a classic Jim Grobe "out-of-nowhere" moment, Wake Forest has picked up a signing day surprise in the form of running back Joseph Byrd out of Ida Baker. The 5'9", 170 lb RB had offers from Arkansas, Kentucky, Minnesota and Purdue among others.

He runs a 4.37 40 yd dash and is just another in the long line of Florida products to be making their way up to Winston-Salem. Byrd has said that he will be enrolling of Spring of 2011. After losing Nick Knott Knott still signed, but the Deacs missed on Jawan Jamison, this is very good news on Signing Day.

Byrd's great speed is mixed with good vision and gives the Deacs that home run threat they are always looking for from the tailback position. He had some injuries, so enrolling later will hopefully give him time to get healthy; Wake already got great results from WR Chris Givens, who overcame a torn ACL to be one of the Deacs' best receivers in his RS Freshman season.

Joseph is a three-star according to ESPN, and ranks as a 77 overall. That is good for the 59th best RB in the class, better than both Jamison and Knott. Here is what ESPN's scouts had to say about Byrd:

Byrd has the size and playing speed we like to see for the running back position at the major level of competition. This is an exciting, productive back with the burst and long speed to make big plays. [...] This prospect may not be an immediate impact player but rather one who could see early playing time due to his already existing skills.