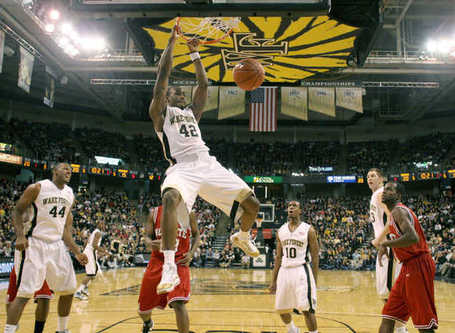 Oftentimes during a rough streak, you miss out on the performances of those who have stepped up when other things are going wrong. And in the case of the Demon Deacons, although they've been getting the increased consistency of Al-Farouq Aminu, the guy who has really improved his play lately has been energy-filled senior L.D. Williams.

Williams is known primarily for two things to this Demon Deacon team: his defense and his rim-rattling dunking ability. He is not a #1 option scoring the basketball, but L.D. knows his role and he plays it to the best of his ability. He does a good job of getting under the hoop and finding putback opportunities as well as getting himself in the lane for easier finishes.

He knows that when he's cold, he's cold and he won't force shots; he's a guy with extremely high basketball IQ who has the exhausting task of defending the opposing team's best player. So, when he's having an off scoring night, he'll find other ways to contribute.

In the UNC-Wilmington game, L.D. hit 11 of 12 free throws and controlled the ball when UNC-W was making a late charge.  In the one point loss to Miami, Williams hit 7 of 10 shots and finished with 17 points, keeping the Deacs in the game at times. Most recently, against Virginia Tech, he hit 9 of 11 shots and was completely in the zone in a game where freshmen shooters C.J. Harris and Ari Stewart struggled.

This Wake team has won a lot of ugly ball games and lost a few even-uglier games. But, the fact remains, that at 8-5 in conference, they are exactly where they want to be and are in better shape than anyone would have predicted at the beginning of the year. And a big part of that reason is due to the leadership of guys like Ishmael Smith and L.D..

He is extremely vocal (and has been since his freshman year) and there aren't many people out there who are better representatives of the Old Gold and Black than he is. With 34 more points, LD will have 1000 in his career, and if he keeps playing the way he has throughout his career, he might finally have a memorable postseason to go along with it.