Inside The Box Score: Freshman Contributions

Share All sharing options for: Inside The Box Score: Freshman Contributions 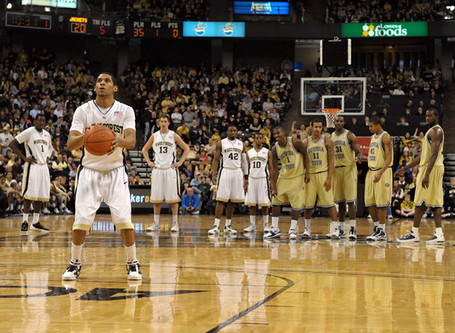 We have beaten to death just how important the play of C.J. Harris and Ari Stewart has been to the Demon Deacons' success this season. The two have used good (and oftentimes) clutch performances to help propel Wake Forest to an 8-4 record in the ACC. But, just how much do the freshmen mean when it comes to wins and losses?

Collectively, Ari and C.J. are averaging 18.2 points and 5.2 rebounds per game. They haven't given a ton in the assist category and are turning it over at a 2.8 per game clip, but all of that is basically negated by the fact that they are shooting a solid 38% from beyond the arc. Aside from their shooting, they have come up with big buckets at the right time and have made plays in situations that freshmen do not usually make.

Unfortunately, the two have hit a bit of a wall. It's to be expected. They are freshmen playing a combined 45.7 minutes. Not only that, but defenses, which did not know what to expect from the two, now have a lot of tape from C.J. and Ari and have no doubt been scouting them. Harris especially, he's playing a ton, and it has showed. In his last 24% and averaging just 5 ppg.

That said, Wake's pulse may seem like it rides on the play of Ishmael Smith and Al-Farouq Aminu (and to an extent--Chas McFarland and Tony Woods), but there might not be a more glaring X-Factor than what Stewart and Harris do in their games.

So as you can see, in Wake's four conference losses, the two combine for almost 8 points less scoring per game. In those same losses, Wake has lost by an average of 11.5 points, so that extra 8 points almost tips the scales (especially considering that two of those losses were by four points or less).

Obviously, when you have two outside shooters, you're going to have nights when they are down. And for the most part, the two have found ways to contribute in other areas when their shots aren't falling. But for a team that desperately needs guys to bust the zone, it makes sense that Dino Gaudio is leaning heavily on his shooters.

With four remaining conference games, will Stewart and Harris be able to bust through the freshman wall, stay fresh, and give big games when Wake needs them to? We saw Ari hit huge shots and CJ make big plays against GT, so they are fully capable of that. Regardless, the two have been a big part of the reason that the Demon Deacons find themselves at 8-4 in conference.