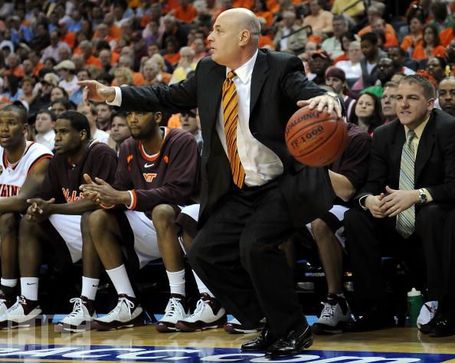 We've got a big one in Blacksburg tonight, and that means only one thing: time for some Coffee Talk. WakeJake and I are taking a look at the Deacs' matchup against Seth's Puppies. The big question of course is, will the Demon Deacons be able to pull one out against the Hokies?

MRickman: Well Jake, I don't think anyone would be disappointed in the Demon Deacons if they came out and played the Hokies with the same intensity they showed against Georgia Tech on Saturday. What do you make of this game at first glance?

WakeJake: This is definitely a tough one for the Deacs. Virginia Tech needs this win in the worst way to try to earn some respect nationally. They played a terrible non-conference schedule and, as a result, really have some work to do against the better teams in conference to get into the tourney. With a win tonight, the Hokies will be on the right side of the bubble and Greenberg may be spared of his yearly rant about being left out of the tourney at the end of the season.

MRickman: I really do want a Wake win, if only for the entertainment value of getting to hear one of Seth's rants again. But in all honesty, do you think that VT is a tournament team?

WakeJake: That's a close call, but I think they are. Coming into the season I wasn't sure who was going to help out Malcolm Delaney and Jeff Allen in the scoring column. However, Dorenzo Hudson has really stepped it up and it capable of putting up huge numbers (he scored 41 against Seton Hall). They aren't necessarily a pretty team to watch, but so far they have won all the games that they were supposed to win which is tough to do throughout the course of an entire season.

WakeJake: They get it done in different ways, but yeah, a lot like Wake. What do you think the keys will be for tonight's game?

MRickman: First and foremost, the home crowd. VT has had Wake's number since coming into the ACC and it is extremely tough to beat the Hokies at home (they are undefeated at Cassell this year). Wake's gotta make sure they play their game, regardless of how sloppy it gets. We say this game in and game out, but a barometer for the Deacs' success will be the production out of C.J. Harris and Ari Stewart. Ari hit a couple huge shots on Saturday and got the crowd rocking, but C.J. struggled to get his shot going. He did add a lot in many other facets of the game though, between nice passing, a huge final bucket and some good defense. Beyond that though, the Jeff Allen vs. Al-Farouq Aminu matchup really intrigues me.

WakeJake: It is worth noting that Wake has been pretty bad every year that they have visited Cassell since VT's move to the ACC, so that was a factor as well. I think there will be two big factors in the game tonight: The rebounding advantage for the Deacs and VT's ability to get to the free throw line. Tech is 11th in the league in rebounding differential, which should make Al-Farouq Aminu have a good feeling going into the night. Aminu is one of the best offensive rebounders in the nation, so his ability to collect misses and convert will be huge again for the Deacs.

On the other side, Wake fans will get a first-hand look at Malcolm Delaney's incredible flopping skills. After his 20 FT performance against Clemson, he was warned by the ACC for his excessive acting and has since found it a little tougher to get to the line. L.D. Williams has been in foul trouble much of the year and I wouldn't be surprised to see him on the bench again as he tries to stay in front of Delaney and Hudson.

MRickman: Yeah, I believe that L.D. needs to have a big performance. He was obviously emotional in the GT game (as was everybody it seemed like), but Wake is going to need him to step up on the defensive end and Delaney is a real challenge. It's been said, but bears repeating just how well Aminu has been playing lately. He has really slowed down his game (in a good way) and is taking the opportunities that are given to him. I fully expect him to have a huge game.

WakeJake: It will be interesting to see the Deacs' matchups on defense. While VT's bigs are not all that tall, their guards have some size. As a result, Ish, C.J. and LD are going to be guarding Delaney, Hudson and Terrell Bell. I would not be surprised if Ish started out on Delaney and LD tried to shut down Hudson, since he is a little taller and a huge X-factor for the Hokies.

MRickman: It could end up being a great time to see the pack line in action. I have a feeling Wake might try to funnel Delaney down to the lane and see our bigs rotate in to contest the shot. Now, this might be a risk if Delaney is getting the calls, but it also could really start to bother him if our guys stay big and get some blocks. The perimeter defense was shabby through the first 30 minutes against Tech, but really clamped down, and I feel like Wake has the edge there, especially since VT is not anything special from beyond the arc. So, it's time to put it all together, what do you think happens tonight in Blacksburg?

WakeJake: As you probably have heard, the Hokies haven't lost at home this year. However, they have had some close calls against lower level ACC teams in Blacksburg - BC only lost by 1 and UNC only lost by 4. While I have been trying to figure this out all day, I really cannot come to a prediction that I am even close to comfortable with. Here's my gut feeling as of 3:18 p.m. - Wake's bigs get Jeff Allen in foul trouble early. Delaney and Hudson get their buckets, but J.T. Thompson does not step up like he needs to in the absence of Allen.

This game is close throughout, but Wake rides the shoulders of Farouq and Chas McFarland inside with a little long distance help from Mt. Ari Stewart. Wake wins another nailbiter 63-61.

MRickman: I'm flipping the switch. I just have a weird feeling about this game...almost the same way I felt when we played at Miami. It isn't that Wake isn't capable of winning or should be in a position to win, but it's a coinflip at this point, and as we speak I flipped the quarter I got after I bought my bagel this morning...Wake heads, VT tails...it came up VT. So it's VT 65, Wake 64, but like I said, it's 50-50.

WakeJake: While a loss would not really hurt the Deacs all that much, I expect this game to take its toll on my nerves even more than usual. Thank goodness I have plenty of Red Oaks left. Go Deacs!

MRickman: Yeah, it's a real shame I couldn't enjoy more of those, but it's my gift to you. I'll be enjoying some pizza from Cle-town's version of Little Italy and a Hibernation Ale or two. This is going to be a fun game, and I'm glad I don't have to watch this one on the computer. Here's to Ari putting up 20 tonight.