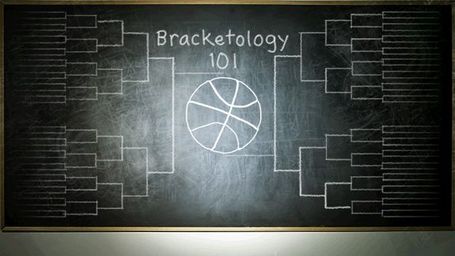 As we start to move into conference play, it is a good time to take another look at the Pomeroy bracket. Now that I'm done with exams, and the season is about to start heating up, expect much more frequent updates. Not sure what's going on here? Check out the intro.

Click through for the bracket, along with analysis of which teams to buy and sell, this season's emerging storyline, and the next installment of "Joe, what are you thinking?"

Without any further ado, here is the Pomeroy bracket, as of December 16:

Connecticut (Lunardi: 2; Pomeroy: 8): They certainly looked impressive in Maui with back-to-back neutral court wins on national TV over Michigan St and Kentucky, but this is also the team that nearly ended up in Maui's loser's bracket; Wichita St led for the first 35 minutes of UConn's opening game of the tournament. UConn also struggled with New Hampshire. Kemba Walker has exploded into a player of the year candidate(/favorite?), but it's tough to lose three starters off a team that finished outside the top 50 and climb into the top 10, particularly in a conference with so many elite teams. Expect UConn to end up closer to the bubble than the top line.

Missouri (Lunardi: 5; Pomeroy: 10): Yes, they are 8-1, with an overtime loss to a top 10 team. You could say they gave the Georgetown game away, and they should be undefeated. At the same time though, a team that struggles to beat Western Illinois, Wyoming, La Salle, and Oregon doesn't really deserve to be undefeated. According to the efficiency numbers, the Tigers are simply not an elite team. The defense has declined tremendously from the past two seasons; not surprising, considering all five starters are gone from the 2009 Elite 8 team. In a conference like the Big 12, 40th overall translates to 6th place and a projected 8-8 conference record. With a murderers row schedule down the stretch (Last 4: Baylor, @KState, @Nebraska, Kansas) Missouri might need to do some work in the conference tournament to secure an at-large bid. I do think Missouri will hear their name called on Selection Sunday, but expect them to be the underdog in a 5-12 matchup, not the favorite.

Washington (Lunardi: 6; Pomeroy: 2): This Huskies team is quite underrated in the mainstream right now. The formula is not complicated: blowout wins + close losses = computer love + human hate. Expect Washington to compile 14+ conference wins in a still-down Pac-10. With so few top teams out West, Washington should be an early favorite to get some geographic protection, perhaps playing the opening weekend in Denver.

Wisconsin (Lunardi: 7; Pomeroy: 3): Wisconsin is perennially a Pomeroy favorite, as they surgically suck the life out of weaker competition and rack up blowouts. While #11 overall might be a bit high, I would feel real bad for a 10 seed that has to face them in the opening round. Moreover, I'd feel bad for the two seed as well. The Badgers have eight comfortable wins, a win at Marquette, and two close losses against tournament teams. In fact, Wisconsin has led with under 5:00 minutes left in every game, including five games against the top 75. Expect the Badgers to rise to the top four lines as they contend for the Big 10 title (like they do every year).

Storyline to Watch: The Fall of Mid-major Dynasties?

We are nearing the end of the non-conference season, and Xavier, Gonzaga, and Butler all appear unlikely to merit at-large bids this season. It'll be interesting to see how the Selection Committee handles these cases. Will they get the benefit of the doubt based on past success? I think they are going to need it.

Xavier is 6-2 with a bad loss, two OT wins, and two other one-possession wins. That translates to a Pomeroy rank of 67, right behind Indiana, New Mexico and Belmont. They sorely need a marquee win; Florida on New Years Eve might be their last shot (Wake doesn't qualify this year, believe it or not). With the way Richmond and Temple are playing, Xavier is going to need an at-large bid to get in.

Gonzaga is in a similar situation. At 4-5 overall (1-5 vs real competition) Gonzaga has major work to do to build an at-large case. Blowout losses against Washington St, Illinois, and Kansas St suggest that the Zags simply aren't a tournament quality team this year. Pomeroy agrees, projecting Baylor as a 12 point favorite this weekend in Gonzaga's last chance for an elite win. Compounding Gonzaga's problems: remember that pesky St. Mary's team that waxed the Bulldogs by 19 in last year's conference tournament? They might be even better this year.

Last but not least, last year's national runner-up Butler could very well be the Horizon league runner-up this season. Cleveland St is 12-0, #63 overall. You might be thinking, well, 63rd overall isn't that special. And that is true. But the problem for Butler is that team #63 is the best team they play the rest of the year. Considering the fact that the Bulldogs don't have a single top 100 win right now, I really don't see any way Butler could build an at-large quality resume at this point. Expect Butler and Cleveland St to be fighting for their lives and the league title in the Horizon conference tournament. Save the date: Tuesday, March 8. ESPN. 9:00.

And finally, what you've all been waiting for...

Joe, what are you thinking?

As usual, Joe has a variety of questionable teams taking automatic bids in the one-bid leagues. Notably: St Francis is ranked 60 spots behind Robert Morris, Liberty is 100 spots behind Coastal Carolina, Nicholls St is 85 spots behind Stephen F Austin, Arkansas-LR is 75 spots behind Western Kentucky, Jacksonville is 100 spots behind Belmont, and Delaware is 90 spots behind Old Dominion. I understand that Joe is evaluating the current situation, so he is automatically plugging in whoever is currently in first place, breaking ties with RPI. The problem is that conference records and RPI are completely meaningless in mid-December. This procedure allows for a lot of completely unrealistic results, such as the six cited above. I don't care what their RPI is right now; Delaware is not going to win the CAA. Seriously, its under a 1% chance.

This week there is a major-conference example to really highlight this point. Right now, Lunardi has Virginia winning the ACC. Virginia. The 15-16 (5-11) team from a year ago. The team that was blown out by Stanford. Anyone and everyone who follows the ACC knows that there is essentially a 0% chance that Virginia wins the Duke Invitational this March. Why are we seriously entertaining this possibility? It distorts the whole projection, because including Virginia in the field takes away an at-large spot. Why not use common sense, and project Duke? Or, if you really want to use current conference record, at least break the tie with a more accurate indicator of performance; RPI is terrible. ESPN ought to be embarrassed that their only mock bracket this month includes Virginia. Who really thinks its a good idea to base the bracket off of conference records through one game, using the RPI as a tiebreaker? Joe, what are you thinking?

Note: Remember how I used this space last month to rant about Lunardi slotting Jackson St as a 15 seed? Rest assured, they are now in their rightful place; a 16 seed, in a play-in game. I expect Lunardi's next bracket won't include Virginia.