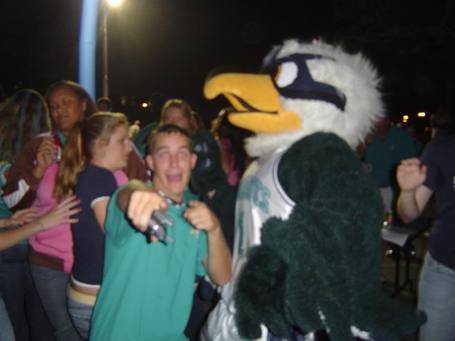 At Blogger So Dear, we've had the opportunity to talk to some great writers and bloggers, and today is no exception. To get ready for the Deacs' matchup against the UNC Wilmington Seahawks on Sunday, we reached out to one of the best beat writers in the state, Brian Mull of the Wilmington Star News.

We talk about the parallels between the two teams, Seahawks' head coach Buzz Peterson and the vaunted 2011 UNCW recruiting class, which could be make-or-break for the program, after the jump...

1.)   Both coaches are in their first year at the helm with a young, depleted team. Assess the job Buzz Peterson has done on the court and on the recruiting trail.

Peterson has done a good job in a difficult situation. The three players he expected to play most of the frontcourt minutes this season when he took the job in April, are no longer in the program. Peterson hasn’t used this as an excuse, even though size and depth in the post is an obvious weakness. The Seahawks have surprising victories over Morehead State and George Washington - they were heavy underdogs in both games - and played with confidence down the stretch to rally and beat Liberty. Confidence comes from the coach in those late-game huddles. Peterson signed eight high school or prep school seniors in the early signing period. By all accounts, these players are CAA-caliber talents. I think it was imperative that Peterson and staff make a significant haul in the fall to give the fan base hope for the future as they endure another trying season.

2.)   The Seahawks are 296th in points per game this year. Why are they having so much trouble scoring the basketball?

Part of their scoring trouble can be attributed to the schedule. The Seahawks managed only 41 points at Ohio State and 52 against George Mason, which is defending as well as anybody in the CAA. And part can also be attributed to the tempo. Other than the second half against N.C. A&T and stretches of the GW game, UNCW has played at a deliberate pace, strived to limit the number of possessions by working the shot clock down to single digits. And, while there are some good 3-point shooters in the lineup, there’s simply not a lot of diverse firepower on the roster. By that, I mean many of the Seahawks who can score can only do so from one area of the court, such as behind the arc. Neither of the starting guards is adept at penetrating into the lane in a halfcourt setting and finishing at the rim.

3.)   This year Wake brought in a vaunted five-man class that was expected to be the future of Demon Deacon basketball. Next year, Coach Peterson is bringing in what could very well be the same thing. Speak to that comparison and the importance of the Seahawks' newcomers in 2011.

Members of both classes will have to play a significant role early in their career and do so without the benefit of learning from upperclassmen who have been major contributors to a winning team. The 2011 UNCW class will form the foundation of the program Peterson is trying to build on the court and in the classroom and at least four of the freshmen will have to start or factor heavily into the rotation from opening night next season. In particular, the guards are going to have to shoulder the ballhandling and playmaking responsibilities and the coaching staff is going to have to remain patient to let them play through their mistakes. If UNCW is to return to the top half of the CAA, where it feels it belongs, these players will be the ones who take them there.

4.)   Both Matt Wilson and Keith Rendleman have seen increased roles for the Seahawks this season. Is it a product of coaching, maturity or a combination of both? How does it compare to local product Ty Walker's development for the Demon Deacons?

Wilson and Rendleman, like Walker, have been thrust into larger roles out of necessity. Walker has always possessed natural shotblocking ability due to his length and instincts. There was no room in the rotation for him the last couple of years, and now he appears to have added the strength and gained the confidence to let that skill shine. Wilson is an adept low-post scorer, when he’s able to establish position and demands the ball. Rendleman is still learning how to operate in the paint, but is an excellent offensive rebounder. The new UNCW coaching staff has emphasized individual skill development and I think both UNCW big men are continuing to improve, it’s just not always a straight-line progression.

5.)   How has Chad Tomko's game changed in Coach Peterson's offense? His minutes are up, but his scoring has taken a slight hit and his 3pt % has dropped. Is he forcing the issue a bit, or have shots just not been falling for the senior?

Tomko’s 3-point percentage is a career-low 27 percent. He’s at his best when he plays his role as a scoring point guard and looks to get his teammates involved early as he did against GW when he had 11 points on 12 shots and 10 assists. He creates his own shot better than anyone else on the team, but is still prone to poor shot selection or bad decisions on three or four possessions a game. With limited weapons around him, he’s also the focus of every opposing defense, which limits the number of clean looks at the basket for the 5-foot-10 senior.

6.)   Talk about the play of the freshmen this year (Donte Morales and Tanner Milson)? What have they brought to the table?

Morales has struggled somewhat with his perimeter shot, but has remained steady with his energy level and effort. He’s a good rebounder from the small forward position and has shown flashes of a mid-range game. Milson is a spot-up 3-point shooter and backup point guard. He’s also consistently received a high grade from the coaching staff for his defense.

7.)   The Deacs have had the tendency to make a star out of an otherwise unknown quantity in the past. Who would be that guy for the Seahawks on Saturday?

I think Morales is due for a breakout shooting game. He’s got a smooth lefthanded stroke but because he’s hit only 20 percent on the season, I imagine Wake wouldn’t have a problem with him firing away from long range.

8.)   UNCW is 268th in the nation in effective height-how do you overcome this size problem?

To quote Peterson: recruit. Four of the players in the 2011 class are 6-foot-7 or taller. There’s not much this UNCW team can do, other than pack its defense around the lane and hope the opponent takes the bait, fires 3-pointers at will and suffers a cold shooting night. The small lineup UNCW started in the last two games averaged 6-2, 175 pounds. Obviously, it’s very difficult to compete at any level of Division I basketball with such a short, thin team.

Wake is in a funk coming off exams and overlooks the Seahawks, who hit at least 10 3-pointers and commit fewer than 11 turnovers.

The Deacons turn UNCW turnovers into breakaway layups and dunks early to build a double-digit lead, then start pounding the ball inside where UNCW has no answer.