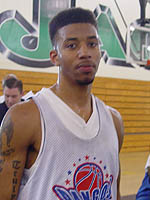 Wake Forest's 2010-2011 basketball season is slated to kickoff tonight at 7:00 when the Deacons take on the Quakers from D-III Guilford in Wake's lone tuneup before the season starts. The Deacons are only expected to start six starters to take on the Quakers who are coming off a 65-46 victory over the Italian Junior National Team on Tuesday. Plagued by injuries, the Deacons are only expected to field a roster with six scholarship players for tonight's game. Depth could be a very big concern for Wake as Guilford is a formidable opponent, finishing 3rd in the nation last year in D-III, and winning the regular season ODAC championship.

Click through for a more in-depth look at Wake Forest's roster headed into the 2010-2011 season.

(via WakeForestSports.com)
After a quick look at the roster it appears that Wake Forest has more than enough players to take the court for the first peek at the Deacs this season, but Wake has been hampered by an inordinately large number of injuries during the preseason.
Sophomore Ari Stewart is slated to miss tonight's game because of a hyper-extended knee, freshman Melvin Tabb has mono and won't play, freshman Tony Chennault has been hampered by a stress reaction in his foot and is not going to play, while transfer Nikita Mescheriakov from Georgetown is not eligible until after first semester exams (because of the NCAA's rule on transfers sitting out a year). Even top walk-on Brooks Godwin is expected to miss the game with a lingering leg injury.
This leaves Wake with an awkward six remaining scholarship players tonight and more than likely the following starting lineup:
PG: C.J. Harris
SG: Gary Clark
G: JT Terrell
SF: Travis Mckie
C: Ty Walker
Bench: Carson Desrosiers
One would expect the healthy walk-ons to see some playing time as well tonight. Guilford does not have a lot of height compared to the Deacs and one would think that even the walk-ons would experience some success in defending and scoring against Guilford's starters.
This will be Wake's first game under new head coach Jeff Bzdelik, the source of much talk around the water cooler for Wake fans throughout the off-season. A glance at previous jobs for Bzdelik reveals that Wake's defense may not vastly improve from the packline defense implemented by departing coach Dino Gaudio. Excluding Bzdelik's first year at Colorado (simply because he did not recruit more than a couple of the players) the following are Colorado's rank in KenPom's "four defensive factors" which statistician Ken Pomeroy has deemed to be indicative of a team's defensive success over the previous two seasons.
2008-2009 Season:
Offensive statistics are on the left, defensive statistics are on the right, and the national D-I average is the third column. The 2008-2009 Colorado team was very effective on offense, a staple of the Bzdelik offensive scheme. They were able to get to the free throw line more than the average D-I team, but did turn the ball over quite frequently (on 21.3% of their offensive possessions) and were horrific at getting offensive rebounds.
On the defensive side, Colorado was good at forcing turnovers, but not great at shutting down other teams from the field and boxing out offensive rebounders.
2009-2010 Season:
The 2009-2010 season for the Colorado basketball team simply reveals the same pattern from the previous year. Bzdelik-coached teams are effective on the offensive end (34th in the nation in offensive efficiency last year) and it will be refreshing to see offensive sets and plays for a change. However a major point of concern has to be the defensive tendencies displayed by former Bzdelik teams. Quite frankly the team was horrific at boxing out and keeping the other team from scoring.
The Buffaloes were also 340th in the nation last year in rebounds (out of 347 teams). In fact, the leading rebounder  Alec Burks only averaged 5 rebounds a game last year.
For the Deacons to be competitive this year, they will have to box out and not allow teams to get second chance buckets as Bzdelik teams in the past have tended to do.
This game is exciting for a large number of reasons, but regardless of the result it is necessary to keep in mind that this is an exhibition game and that Wake only has 6 scholarship players available, 3 of which are true freshmen. It will be great to get back out to the Joel, particularly after this year's football season.
The Deacons play their first regular season game against Stetson next Friday November 12th at 7:00 EST.