Share All sharing options for: The State of Wake Forest's Football Staff (Part 1) 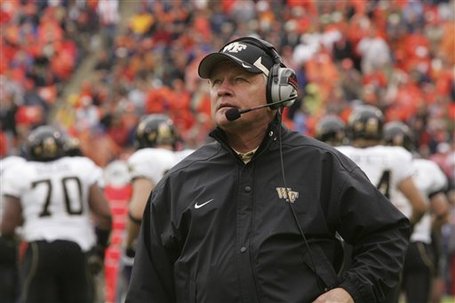 As Thanksgiving approaches the 2010 Wake Forest football team is prepared to travel to Nashville, Tennessee to take on the 2-9 Vanderbilt Commodores in the season finale. The Deacs also enter the game with a paltry 2-9 record, a not so subtle indicator of the poor season that Wake Forest has had so far. Head coach Jim Grobe is currently in his 10th season at Wake Forest and has overseen the most successful run of football in Wake Forest football history. The 2010 season has been a frustrating one for players, coaches, and fans alike. Recently players have spoken out on social media, frustrated by their own efforts, efforts of fellow players, and efforts of the coaching staff. No fewer than four players have had controversial tweets in the aftermath of the Clemson debacle.

At this point the Grobe regime has reached a critical crossroad. Brad Lambert has been at Wake as long as Grobe, the previous three seasons as the defensive coordinator. Steed Lobotzke has also been with the program for Grobe's entire tenure and is currently in his 8th season as the offensive coordinator. When the season concludes on Saturday, both head coach Jim Grobe and Athletics Director Ron Wellman will both be tasked to take a serious look at the current football staff and evaluate if and where changes should be made to the coaches.

The Current Coaches And How They Got Here

Jim Grobe (Head Coach, 10th Season): Grobe took over in 2001 after Jim Caldwell was fired and has led the Deacs to their best football span in Wake history. The Deacs went to bowls in three consecutive years from 2006-2008, including winning the ACC and going to the Orange Bowl in 2006. Grobe was the head coach at Ohio prior to coming to Wake Forest.

Steed Lobotzke (Offensive Coordinator, 8th Season, 10 Total years at Wake): As mentioned before the jump OC Steed Lobotzke has been with Grobe his entire tenure at Wake. Lobo has been the offensive coordinator since the 2003 season and was at the helm of the offense through Skinner's entire career, including the 2006 Orange Bowl season. Lobo has been on Grobe's staff since the 1997 season when they were still at Ohio. Lobo is also the positions coach for both the offensive line and the tight ends.

Tim Billings (Defensive Ends Coach, 1st Season, 5 Total Years at Wake): Billings has been at Wake for the past five years and in his five years has coached three different positions. In 2006 and 2007 Billings was responsible for the receivers; in 2008 and 2009 he was in charge of the secondary; and was moved again in 2010 to take over the defensive ends. Billings won the FootballScoop Secondary Coach of the Year in 2007 and was the catalyst in the decision to move Kenny Moore to RB from WR during the 2006 campaign which saw the running backs position hit hard with injuries.

Keith Henry (Secondary Coach, 1st Season, 10 Total Years at Wake): Henry has been with Grobe since the 1995 season and switched to coaching the secondary this season after spending the previous six years as the defensive ends coach.

Tom Elrod (Quarterbacks Coach, 3rd Season, 8 Total Years at Wake): Elrod is responsible for the quarterbacks for the third year in a row and has been with the program for 8 years. Elrod went to Wake from 1993-1996 and received one varsity letter during his time here.

Brian Knorr (Wideouts Coach, 3rd Season, 3 Total Years at Wake): Knorr has coached with Grobe for 10 years at three different institutions and is responsible for the wideouts for his third consecutive year at Wake. He was the head coach at Ohio from 2001-2004 after Grobe left and was fired after the 2004 season with an 11-35 record over 4 years.

Steve Russ (Linebackers Coach, 1st Season, 3 Total Years at Wake): Russ was moved in the offseason from tight ends and fullbacks to be the linebackers coach for the 2010 year. Russ was on Knorr's staff in Ohio from 2001-2004 and came to Wake Forest prior to the 2008 season.

Billy Mitchell (Associate Head Coach/RB's/Kickers, 10th Season, 10 Total Years at Wake): Mitchell has been with Grobe for the past 25 years and has been a coach for 29. He is in his tenth season at Wake Forest, after following Grobe from the Air Force and Ohio.

The current slate of coaches have all been at Wake Forest for at least three seasons, but for the most part were all reassigned positions prior to this season. The reasons for this shakeup are not particularly well flushed out, but it is clear Grobe felt that changes had to be made internally and that this was the best way to mix things up on both sides of the ball. The two coordinators Lobo and Lambert have both been with Grobe for his entire time at Wake, as well as Billy Mitchell and Keith Henry. Every single positions coach at Wake Forest with the exception of Tom Elrod coached with Jim Grobe at either Ohio, Air Force, or both.

The current coaching staff has achieved a number of remarkable things over the previous five years at Wake Forest. Wake has seen more players go to the pros over this span than any other five year period in program history. The team went to three consecutive bowls from 2006 to 2008, and had a four year starting quarterback in Riley Skinner who rewrote almost every career passing record in Wake Forest's record book. The 2006 season was by far the most successful season in program history as Wake won the ACC championship for only the second time in school history (1970). This all begs the question: why is there discontent with the current coaching staff for a majority of the fan base? It seems that everyone should be happy with the results, yet nearly everything I read or hear from fans are complaints with the staff.

The answer is simple though, the program has been in a sharp decline since the 2006 Orange Bowl season. Wake had 11 wins in 2006, 9 wins in 2007, 8 wins in 2008, 5 wins in 2009, and sit with 2 wins in 2010 heading into the last game of the season. There has been some staff turnover within the previous few years however as Troy Calhoun left to be the head coach at Air Force, Dean Hood left to become the head coach at Eastern Kentucky, and Jeff Mullen left to takeover the offensive coordinator position at West Virginia. These coaches were all replaced by other coaches within Grobe's Ohio/Air Force network, or were internally promoted to the position.

This staff has been by far the most successful of all time at Wake, but during the  2009 and 2010 seasons, the Deacons have been out-executed, out-coached, and have won only 3 of the previous 17 games with two wins over Duke and a win over FBS school Presbyterian. The Deacons are 3-13 in their last 16 road games (2007 and 2009 against Duke, and 2008 against Florida State) and are on a 9 game losing streak, including giving up at least 50 points in three different games this year. The 9 game losing streak is Wake's longest such streak since the late 1970's. Even under Jim Caldwell, there was no longer losing streak than this year.

One can debate if the problems have to do more with execution or with coaching, but it is undeniable that something needs to happen in this offseason. Players have recently voiced their concerns over Twitter, and even if you don't think that this is an acceptable practice it still reveals discontent with some of the players and the staff. The DeaconSports message board has been a wasteland of insults hurled at the coaching staff and general apathy towards the football program as the season has progressed.

Provided below by cfbstats.com are the offensive and defensive ranks in both yardage and points dating back to the 2004 season:

Lambert has been the defensive coordinator for the past three years and has overseen two of the worst three years of the previous seven. The defense has been far and away better than the offense with the exceptions of the 2005, 2009, and 2010 years which could essentially be considered a wash. Looking at these stats, at no point over the past 7 years has the offense been considerably, or even really slightly better statistically than the offense.

I'll touch on a lot more analysis later in the week with Part 2 and will look at potential moves which could help the coaching staff. Leaving the readers with a teaser though, the first solution to the problem I believe is pretty simple: fire Lobo. This must occur for a series of reasons which I will talk about in the next piece, but before any other changes can be made or staff can be reassigned, this MUST be the first order of business.

I hope all the readers have a happy Thanksgiving and drive safely on this holiday week! And as always, go Deacs!