Q&A with Shakin' The Southland

Share All sharing options for: Q&A with Shakin' The Southland 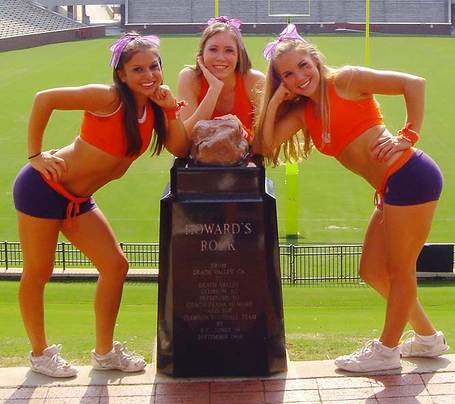 BSD had the chance to talk to the Clemson SB Nation blog Shakin' The Southland this week in advance of the Deacs' matchup against the Tigers tomorrow. Our answers are up on his site, and without further ado, here are our questions and Figure Four's answers.

We talk Dabo, Clemson's running game, predictions and more after the jump...

1.) Assess the season so far. Seems like a typical season to me--highs and lows, good wins, bad losses. What grade would you give the Tigers?

D is my grade.  I would give the season an "F", save the pretty good defensive effort we have given for most of the year.  Clemson has really been outcoached in all of this season's losses and has looked extremely inept (particularly on the offensive side of the ball) all year.  Mix in our coach calling out the fans for being upset that we are complaining about losing and "D" seems more than generous.

2.) Are you part of the Fire Dabo brigade? What's the pulse of the fanbase there?

Well, Dabo didn't hire himself.  The man who did gave Dabo's predecessor a couple of contract extensions and locked him into a huge buyout before firing Bowden nine months later.  The biggest changes that need to be made is at positions above Dabo.  Because of this, Swinney will be at Clemson next year regardless of how this season turns out.
In regards to this staff, the results we have seen thus far are not acceptable given the opposition and the talent level at Clemson.  I think Dabo still has a lot to learn about being a head football coach, but he is not the biggest problem at CU at this point in time.

3.) The running game has looked great in flashes, but from the games I've seen, it's a bit inconsistent. Are you content with the running game or is there something you would change?

Our best running back, Andre Ellington, was hurt a couple of weeks ago and may miss the rest of the regular season (Wake and SC).  He is a fantastic talent on the field and an exceptional back.  Clemson's issue is that this staff would not feed him the ball 20-25 times a game, instead sharing carries with current starter Jamie Harper.  Harper did not run the ball nearly as well as Ellington, but they still split the carries approximately 50/50.  Recently, Harper has run the ball better (over 100 last week against FSU) and looks like he has made a valid attempt to become more of the one cut back needed to run our zone plays.
I am not happy with the amount of touches overall our backs get.  Clemson would be better off just lining up and running the ball than trying to become a 5-wide gun slinging offense.  Clemson shoots itself in the foot repeatedly in the play calling arena.  A good example is last week against FSU.  We were pounding the ball down the field only to throw an inopportune redzone interception.  This is what we have dealt with all year.

4.) What would you guys do without Da'Quan Bowers?

Bowers is an absolute beast and one of the best defensive ends Clemson has ever had.  He improved dramatically over the offseason and really anchors a stout defensive line.  We would still be good on defense but not as dominating up front.

5.) Predict your record the rest of the season. What bowl are you guys expecting to make?

I think we win the next two ball games.  We should be able to handle Wake despite playing in Winston-Salem.  Carolina travels to Death Valley next weekend and I am hoping they will be looking past us to the SEC-CG they will play in the next week.  Carolina has not beaten us two years in a row in 40 years, so I will play on the side of history.
I am not as familiar with the bowl tie ins as I should be, but the "experts" have us going to the Tire Bowl so I guess I will go along with their predictions.

6.) Break the game down--who do you see winning and how do you see it playing out? What's your final score?

Clemson should be able to stop the Wake Forest offense in its tracks, especially looking at Wake's national rankings on the offensive side of the ball.  Our weekly trend (defensively) is to allow an early drive, make adjustments, then play well for the duration of the game so I would not be surprised nor alarmed to see WF get something going early then struggle against CU's defense from there out.  Offensively, I don't know.  You guys painted a dim picture of your secondary when answering my questions BUT I would really like for Clemson to come out and establish the run. Hopefully we won't have to kick any field goals as that is pretty much a crap shoot from any distance.  Based on the recruiting rankings and your answers to my questions, I would predict Clemson 27  Wake 10.