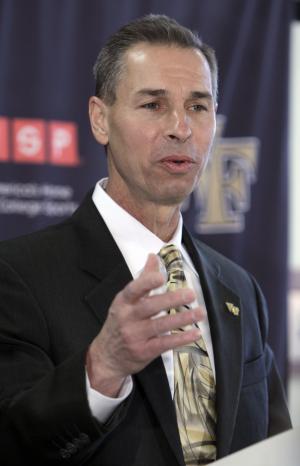 Well it wasn't pretty, but Jeff Bzdelik got his first regular season win at Wake Forest. With the win, the Demon Deacons will face VCU in the regional final of the Preseason NIT. The winner of the game tomorrow night will go to Madison Square Garden next week to play in the semifinals.

I'm pretty tired tonight, so I'm just going to throw up some stats and will analyze some more tomorrow after I get a chance to digest the game.

Click through the jump to see some tempo based stats and efficiency numbers. Courtesy of SCACCHoops.com

Travis McKie had a fantastic game for Wake Forest yesterday and kept us from losing our second game in a row. The biggest thing that sticks out to me from this chart is the +13 +/- from Ari Stewart when he was on the court. Despite not having a good day offensively, Ari crashed the boards and did the small things well. Turnovers continue to be a problem, as they will be all year with no true point guard, with 13 of them coming from Ari/Travis/JTT. Walker needs to continue to crash the boards more and stop trying to block every single shot. We need to shoot better from the free throw line than 69%. We should get to the stripe a lot this year and that will be a big part of our offense with our dribble penetrators. Glad to see a bit of a better rebounding effort, but we still have to get better positioning on shots and hit the boards harder.

Our offensive tempo was similar to the Stetson game, and it continued to lead to turnovers. The 88.0 for offensive efficiency represents how many points are scored per 100 possessions. That puts us at a .88 points per possession. Anything under 1 is bad and over 1 is good, so needless to say, we have to get better at that. This will come with less turnovers, and better offensive sets. We had a 99.7 for the Stetson game, which comes out to .997. Not where we need to be, but much better than last night. Turnovers and rebounding are hurting us the most. Rebounding improved from Friday night., and we also stopped shooting so many threes. I am pleased to see that what hurt us the most against Stetson (aside from turnovers) was improved in some capacity. This indicates to me that Coach Bzdelik is doing a good job of diagnosing the problems, and getting the right players on the court (and in the right position to fix them.

Travis McKie- Was far and away the best player on the court for us last night. He scored, rebounded, and did everything in between. He will be playing in the NBA in years to come, and reminds me a lot of a Josh Howard type. Not to say that he will be that good, but his size, as well as his talents provides him the chance to be that good. Needs to reel the turnovers in a bit. If he can do that, I will feel more comfortable with him driving to the hoop more.

JTT- Not a very good night for our boy JTT. He tried to do too much at times and had some really bad shots/turnovers. He needs to realize that this is not high school and he cannot take the other team on 5 on 1. I am still extremely optimistic about him this season. Travis and JTT need to have it going from outside tonight if we are going to keep it close with VCU.

Gary Clark- Gave 26 minutes, and really did a lot of little things well. He is not ever really going to light up the stat sheet, but he can be a guy who gets after it defensively and keeps the team together. I wish he wouldn't drive in so much, but I feel surprisingly comfortable with him handling the ball.

Ari Stewart- He did not do very well offensively, but he bring s a lot in terms of rebounding. His offensive game will come around, but he needs to learn to take better shots, and also protect the ball at all costs. I'm not sure his ball-handling has significantly improved since last year. I am certainly willing to give him time to get back into game shape (coming off a concussion and a knee injury), but we need him to be productive offensively rather than what we saw last night.

Ty Walker- Ty improved from Friday night and was a force in the first half blocking/altering shots. I still think he needs to learn the difference between trying to block everything, and staying at home to secure a rebound. If he can continue to learn when to do each one then he can be very good. This would allow him to get 5 blocks a game, and also get 7-9 rebounds a game.

Carson Desrosiers- Looked good at times, but he needs to be a little stronger inside. Has a very soft touch from the baseline, and can shoot he mid-range jumper. Carson would be very good in a motion offense (see Marquette or Arizona State), but I think we can utilize him quite well here as well. He will continue to grow and has a pretty big upside as a 4. He is not a 5, and the problem is that we need him to back up Ty there now.

Melvin Tabb- Had a good collegiate debut last night. He had 3 points and 4 rebounds in only 11 minutes. Tabb can be a huge asset in the rebounding department. I would like to see him get added minutes at the 4 to give us another big body in there to help out Ty and Carson.

CJ Harris- Harris had a rough start with two quick fouls, which we absolutely cannot have with out lack of depth. He recovered well to record 13 points in 25 minutes. As the players get more comfortable with the offense Harris should see his assist numbers go up. He needs to have a better than 1:1 a/to ratio, but that will come with time. He needs to make those free throws down the stretch, but as he admitted, he couldn't believe he missed them either. I'll cut him some slack...this time at least!

Aaron Ingle- Honestly, he is the most fundamentally sound player on the team. He played 14 minutes and nearly recorded a Club Trillion if it were not for his two fouls. He gets after it on every single play, and knows how to use his body to box out. His foul was when he used his butt to box out, but he had fantastic positioning. He gave a great rest for Harris (who committed two early fouls), and if he can keep this up then he could be have a big reserve role for us this year.

About to start working on the preview for the VCU game tonight. I am proud of what we have been doing so far. We are improving in facets of the game that we struggled on against Stetson, and that is all that the fans can ask for. The team is young and it will be frustrating to watch them at times, but it will also be really fun to watch them develop and get better as a team together.